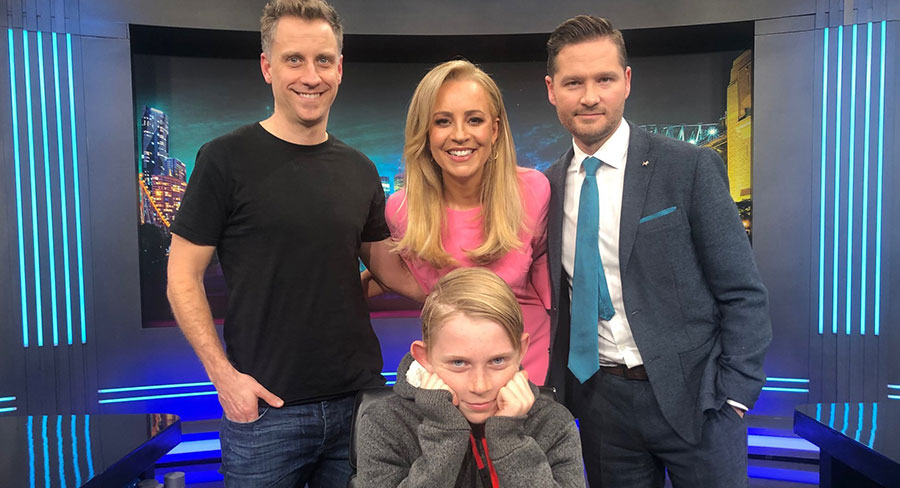 • Carrie Bickmore is back and returns to The Project desk on Monday, 8 July

It has been hard to miss Carrie Bickmore in the last couple of weeks. The award-winning TV and radio host was awarded an Order of Australia earlier this month and it seems she hasn’t stopped since – despite still officially being on maternity leave from her main job.

Although she hasn’t been co-hosting The Project for eight months, Bickmore returned to work on her Hit Network afternoon show with Tommy Little earlier this year and just last week visited the UK with Little to see The Spice Girls in concert.

Bickmore was a guest on The Project recently to talk about the trip and then she appeared on the final episode of the 2019 series of The Weekly with Charlie Pickering this week. Bickmore’s partner Chris Walker is executive producer and co-creator of the program. (They are pictured here on set with Bickmore’s son Oliver.)

After an eight-month maternity leave break, the TV Week Logie award winner joins Waleed Aly and Peter Helliar to bring you the latest news delivered differently from around the country and the globe.

Carrie returns just in time for The Project’s 10th anniversary celebrations with a special 90-minute episode planned for Friday, 19 July.

The Project executive producer Craig Campbell said: “A decade is a lovely milestone to reach doing a show you care so much about. July 19’s telecast will give us a wonderful opportunity to get everyone together and talk about those embarrassing moments we shared with the nation.”

Carrie said: “I can’t believe it’s been 10 years! It only feels like yesterday I was sitting on the desk in a cold sweat waiting for the first show to begin. I have loved watching the show (and my hair) change and evolve over the decade. It’s been like a second home to me and I feel so fortunate to work next to genuine friends.”

It’s been a busy 12 months for Carrie with the birth of her third child Adelaide. She has received an OAM for her service to brain cancer awareness while her charity, Carrie’s Beanies 4 Brain Cancer has now raised an incredible $11.5 million since its launch in 2015.