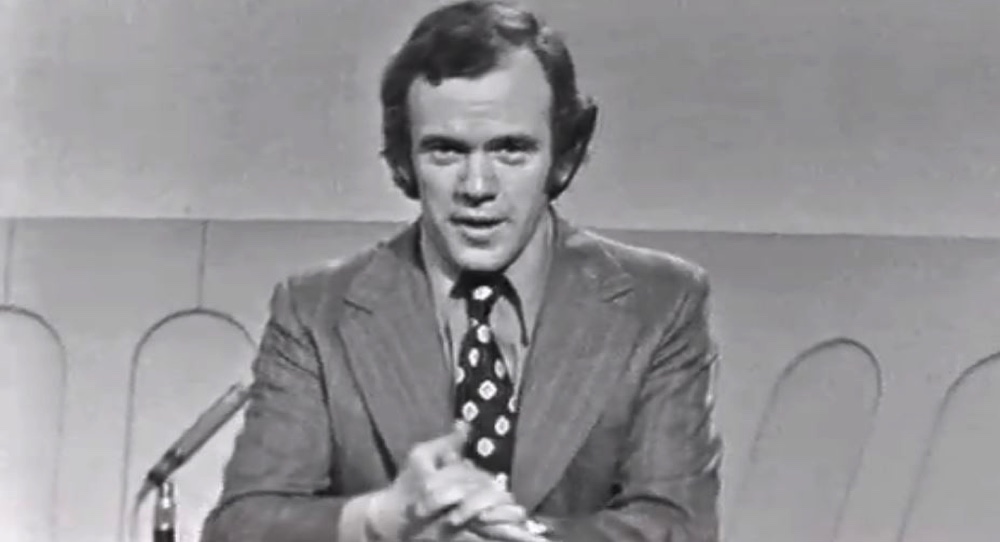 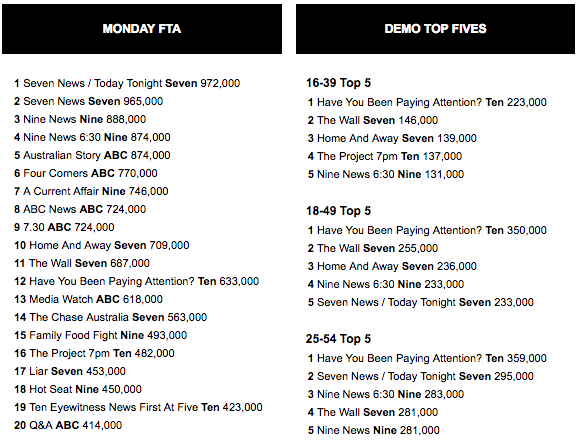 Five questions were posed to Home and Away fans including will Ryder find his place in Summer Bay? The start of the series this week did 709,000 after a week 44 average of 657,000. Home and Away was the channel’s most-watched Cup Eve program after 7pm.

The audiences for The Wall have slowly slipped from its 974,000 launch audience last Monday. Episode four a week after launch did 687,000. Viewers who tuned in got to see Kent and Suz win $175,135 on the episode after the Sunday contestants got zero dollars.

The second episode of the British drama Liar saw Andrew and Laura continue to describe very different stories about the night of their date. The producers seems to be setting viewers up for a “shock” reveal. The episode two audience of 453,000 was down on 512,000 watching the launch episode. 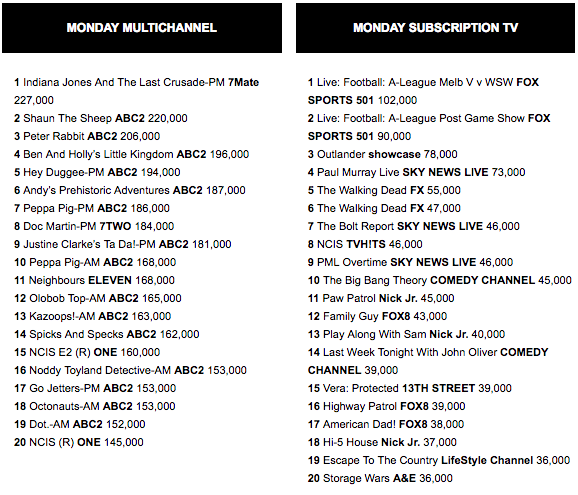 A Current Affair featured a hero neighbour, more shopping bargains and then a Melbourne Cup preview. The start of the new week did 746,000 after a week 44 average of 717,000. And don’t forget Martin King‘s post-Cup Day report on the program tonight.

The five remaining families on Family Food Fight continued the battle. The Monday episode did 493,000. It was the first time under half a million although the last four episodes have been under 550,000.

Episode six of Law & Order True Crime: The Menendez Murders then did 314,000.

All Star Family Feud featured former contestants from I’m A Celebrity…Get Me Out Of Here with Lisa Curry answering the final question. The special did 398,000.

The new Melbourne co-host of the Sydney 2Day FM breakfast show Ed Kavalee was the only regular this week on Have You Been Paying Attention? and he was joined by Rose Matafeo, Nick Cody, Anne Edmonds and Glenn Robbins. The audience of 633,000 was well up on the lead-in, but down on last week’s 724,000.

The channel has set another Monday survey high for 2017 with its 16.9% share. It has only been bettered this year by 17.5% on the Monday in the first week of the Easter ratings break in April.

Behind The Mask Part 1 was the name of the Australian Story episode which looked at the life of Mike Willesee and his current battle with cancer. Mike’s brother Terry introduced the episode and then spoke about his brother during the program. The episode delivered the biggest Australian Story audience this year – 874,000.

Paradise Papers – the biggest leak of secrets papers in history (some 13m of them) – was the subject of the Four Corners episode on tax havens of the rich and powerful reported by Marion Wilkinson. It too did very well with 770,000 watching as it and Australian Story won their timeslots.

Q&A featuring Tony Jones hosting the program’s second high school special for 2017 for the audience of 414,000.

A girl whose arm won’t stop growing featured on episode five of The World’s Most Extraordinary people with 188,000 watching.