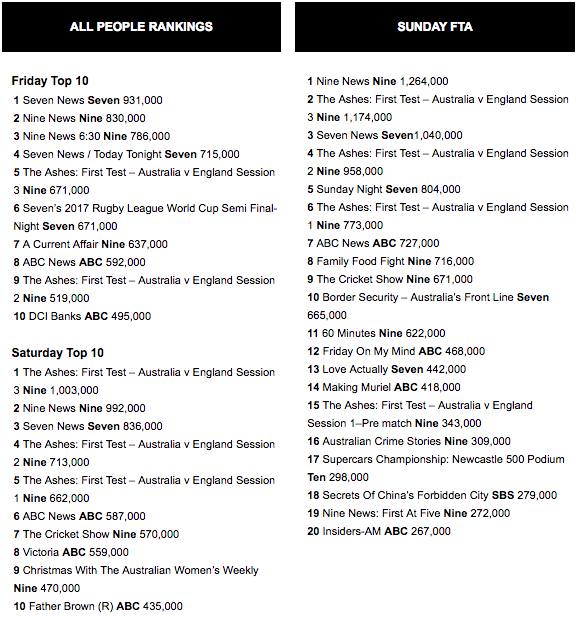 Here we go – the final week of survey.

Winning Sunday is usually key to winning the week, mainly because the stripped formats start on Sunday and run for two, three or four nights. If the Sunday numbers are good, then they will stay strong each night that format screens.

Big Sunday primary channel shares this year included 35.3% for the final of The Block on Nine and 42.0% for the NRL Grand Final which was also on Nine.

Seven’s best primary Sunday share was 29.1% when My Kitchen Rules announced its 2017 winner in April.

The best Sunday share of the year came out of survey with Seven’s 50.6% for the Australian Open Men’s Singles final in January.

On TEN, MasterChef Australia was the backbone of its best Sundays in the first half on 2017. 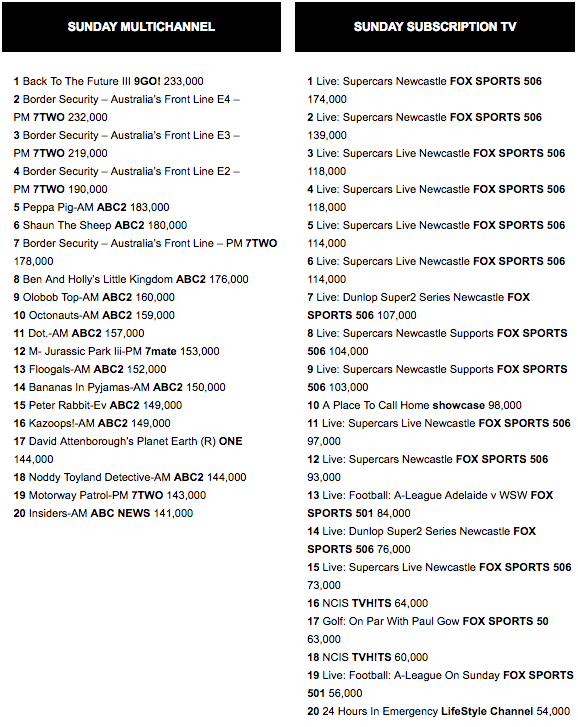 At 8pm Seven screened an episode of Border Security with 665,000 watching.

Seven then signalled the official start of the Christmas season with another screening of Love Actually as the Sunday movie with an average metro audience of 442,000.

In Sydney and Melbourne the fourth day’s play in the First test didn’t end until close to 6.30pm, which pushed the Sunday schedule back 30 minutes.

The penultimate episode of Family Food Fight went to air close to 7.30pm and the OzTAM data indicates an audience of 716,000.

Stories on 60 Minutes included IVF couples, U2 and a young Aussie adventurer. The episode did 622,000.

The channel’s best was the end of the Sunday afternoon coverage of the Supercars from Newcastle with 298,00.

Making Muriel, a doco about PJ Hogan‘s stage adaption of his movie Muriel’s Wedding, did 418,000 in the Doc Martin slot.

The much anticipated first episode of Playmaker Media’s Friday On My Mind followed with 468,000.

A clever piece of programming saw the drama followed by Paul Clarke‘s Bombora Film’s doco Blood And Thunder: The Sound Of The Alberts with 262,000 staying up.

The final week of survey started with SBS World News on 135,000.

Episodes seven and eight of The Nineties then averaged 157,000.