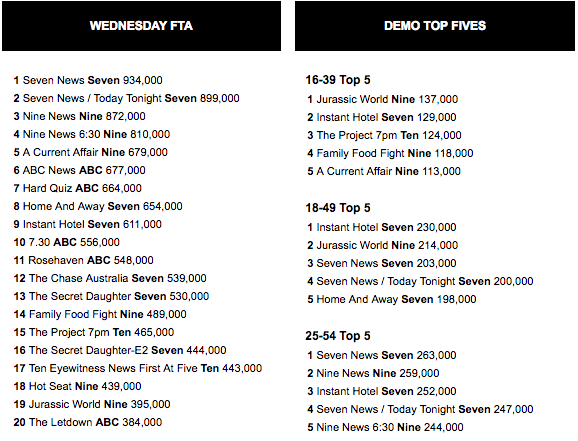 Lynne and Simon hosted the contestants at their Gold Coast Instant Hotel on episode nine, which did 611,000. Among the unspectacular numbers at 7.30pm, Instant Hotel was the clear leader 25-54.

A double episode followed of The Secret Daughter with 530,000 watching the first episode and then 444,000 catching the second on the penultimate night for the show ahead of a double episode farewell next week. Seven can justifiably call it Australia’s favourite drama when you factor in the national audience, which boosted episode one last night to 921,000. Two families faced off for a place in the Family Food Fight grand final while the loser has to try to get to the final the hard way. The episode had 489,000 watching.

Yassmin Abdel-Magied was back in Australia and on The Project where she likened her time in this country to being in a abusive relationship. Later on in the show Matt Preston was spruiking a new cook book. It was 7.29pm when Preston arrived and he seemed to be aware he wouldn’t have long to motivate buyers. The midweek episode did 465,000.

Sisters was moved back later in the night with 150,000 watching.

Episode 17 of the marathon season of Hard Quiz featured a French and Saunders expert. The shows was the hottest non-news program with 664,000 giving it a top five spot behind only Seven News, Nine News, ABC News and A Current Affair.

Rosehaven has been moved into the Gruen timeslot with 548,000 last night watching Daniel and Emma takes sides in a neighbourhood dispute.

The Letdown subsequently got an earlier timeslot too with 384,000.

On Europe’s Last Warrior Kings Dan Snow promised the real story about the Battle of Hastings. 206,000 metro viewers took up the invitation.