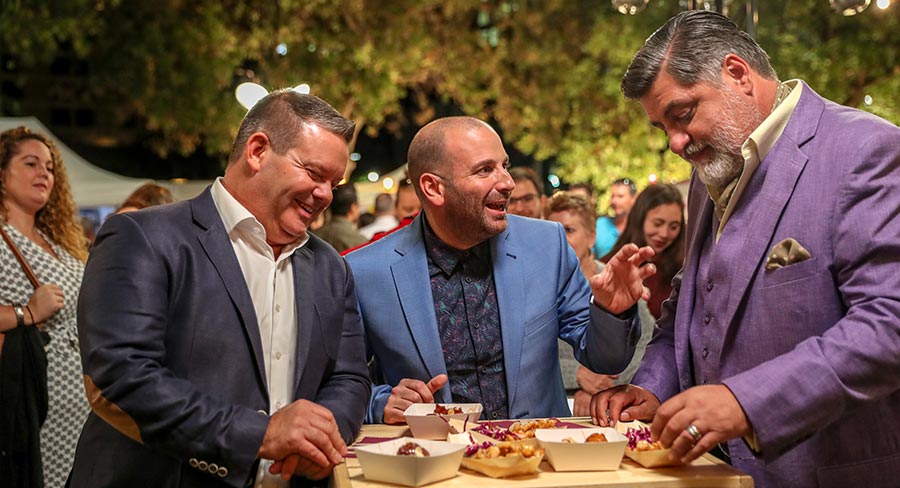 • Lemon meringue pie pressure test in The Cube a winner for MasterChef
• Seven combo of News, Home and Away and House Rules wins night Leigh and Kristie returned to what they were hoping was a “California Cool” property on House Rules. After 786,000 on Monday last week, the episode did 861,000 last night, well up on 786,000 a week ago. The property expert on the show estimated the Morning Peninsula reno had added $385,000 worth of value.

Episode eight of The Mentor then did 421,000 as Mark Bouris examined the books of a startup wanting to change the eating habits of school kids. A week ago the show did 416,000.

A Current Affair went from an exclusive with a career criminal and murder suspect Steve Hainsworth to a slow cook-off with Woolworths. The Monday episode was on 754,000 after an average of 792,000 last week. Andy Lee and his sister Alex in Talkin’ ‘Bout Your Generation

AFL metro markets got Footy Classified with 108,000 in Melbourne.

There was only ever going to be one superstar guest on The Project – the new Officer of the Order of Australia, Tom Gleisner. The Monday episode did 625,000 after a Monday to Friday average of 518,000 last week.

MasterChef spent its second night in South Australia with a pressure test to decide the next cook to be sent home. Battling Ben, Hoda and Chloe, Genene Dwyer had been tasked with recreating Brendan Wessels’ lemon meringue pie. As head chef at The Cube restaurant in the McLaren Vale, his dish was a delicate plate consisting of lemon curd parfait balls, nitro fennel balls and a caramelised milk chocolate hexagon made using a 3D food printer, the only one of its kind in any Australian restaurant.

Genene was happy with her lemon curd parfait balls and coconut rocher, but there were obvious missing elements – the candied ginger, crisp pearls and fennel flowers, and lacking that balance of flavours it was enough to send her home. The episode did 885,000 which propelled TEN to a win 25-54 for the night. The ep was up on the previous Monday’s 850,000.

Tom Gleisner AO was then back hosting the latest episode of Have You Been Paying Attention?. Guests this week alongside Ed and Sam were Triple M’s Wil Anderson and Jane Kennedy plus Anne Edmonds, who was the winner. The ep did 790,000, which was up on last week’s 753,000.

A new series of Backroads has taken over the 8pm slot from Australian Story. An audience of 640,000 saw host Heather Ewart visit Waterfall Way in NSW.

Media Watch was looking at how the Daily Mail handles reports of celebrity suicides and then it turned the spotlight on the Today show and a look at Aussies’ obsession with sugar. The episode did 515,000.

Bill Shorten was then the guest on Q&A with an episode from Adelaide that had 340,000 watching.

The Queen’s Favourite Animals was the title of a special at 7.30pm as the channel kept a link with royalty in the former Elizabeth timeslot. The show did 233,000.