The biggest prize in world cricket is up for grabs and Foxtel will show every game of the 2019 ICC Cricket World Cup in England live with no ad-breaks during play from Thursday, May 30 at 7.00pm.

Foxtel subscribers are being promised the best seat in the house with 336 hours of live match coverage on Fox Cricket and Fox Sports for 38 consecutive days before the semi-finals start on Tuesday, July 9.

Australia’s World Cup defence will be led by Aaron Finch who will welcome back batsmen Steve Smith and David Warner to international cricket, joining a bowling attack spearheaded by Pat Cummins and Mitchell Starc – 20 years on from Australia’s dramatic 1999 World Cup victory in England.

Fox Cricket expert and World Cup winner in 1999, 2003 and 2007, Adam Gilchrist, said: “With so many superstars spread across so many nations this will be one of the most hotly contested world cups ever.

“Australia has got its two big guns back after a tricky 12 months and are more than capable of pulling off back world cup victories, tournament hosts England will carry the hopes of a nation on their shoulders, cricketing giants India have a very strong line up and the killer instinct of Kohli, South Africa will carry a sense of atonement for the pain of 1999 in the same country.

“Then there is Pakistan, New Zealand and the West Indies who can all rise to the occasion and beat anyone in the world when they are firing…all the ingredients are there, I can’t wait for it to start.”

Head of Fox Sports, Peter Campbell, said: “Foxtel is the Home of ICC Cricket World Cups in Australia. Our amazing women’s team brought home the silverware from the West Indies last year, and our aspirations for our men are no less. What a great tournament this shapes up to be, and Foxtel has it all.”

From the opening ball between hosts England and South Africa on Thursday, May 30 through to the World Cup final on Sunday, July 14 Fox Sports will be the only place to capture every moment of World Cup action live.

Viewers can also get closer to the game by accessing the Fox Cricket App which delivers the latest news, fixtures, scores, stats and video from across the world of cricket. Plus, Foxtel eligible sports customers can enjoy round-the-clock live streaming of the Fox Cricket and Fox Sports channels on Foxtel Go.

In addition, Foxsports.com.au will be the destination to follow the action online, with all the latest news and results, comprehensive video highlights and plenty of insights from the Fox Cricket commentators with regular podcasts, columns and live Q&As.

All matches will be available in HD and ad-break free during play. 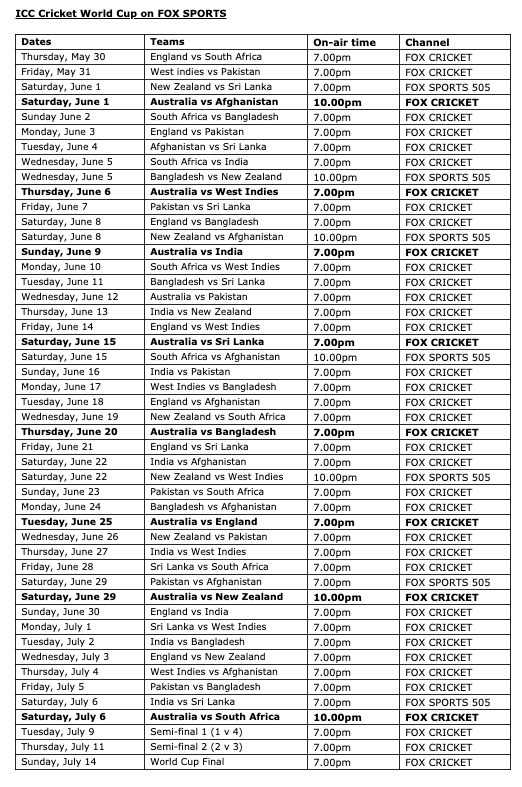