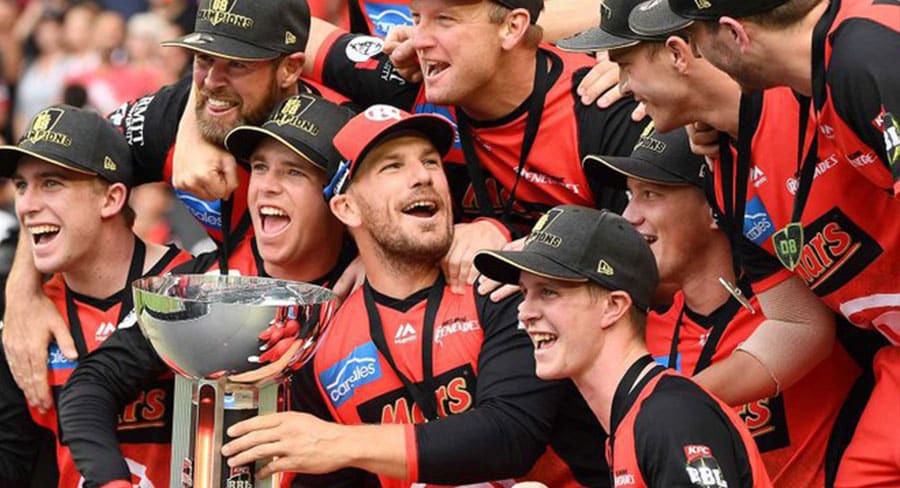 The ninth KFC Big Bash League (BBL) fixture has been released today, unveiling an exciting home-and-away season that will build into a new and improved finals series format.

BBL|09 will feature a shorter regular season compared to last season, with most matches falling within the school holidays as the competition promises to provide more family-friendly entertainment than ever before.

The new finals structure will create a new crescendo to the competition, rewarding the top two teams with a double chance, along with the opportunity for the fifth placed side to have an impact in the finals series. 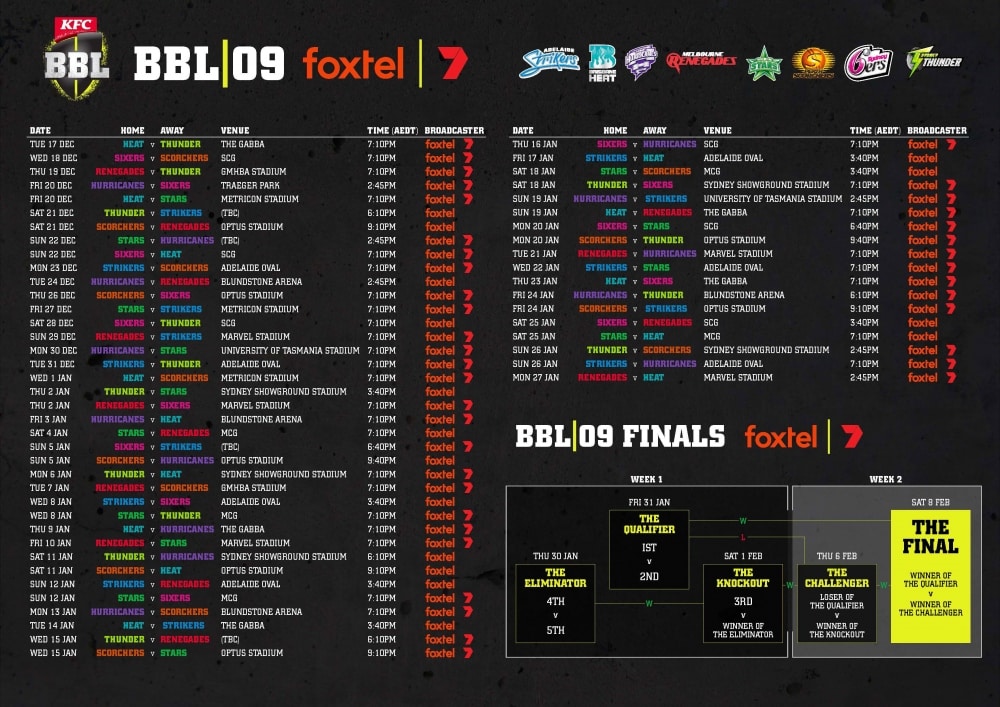 • All Big Bash teams will again play a total of 14 home-and-away encounters to tally 56 matches in the regular season played over 42 days.
• The BBL season will be shorter this year, building into an epic end to the season across the January long-weekend and finals.
• The new finals format will provide a better reward to the top two teams from throughout the season and bring greater integrity to the competition.
• Five teams will play off in the finals which will now extend the series across two weeks, including the winner of The Qualifier getting a week to prepare for hosting The Final on Saturday February 8.

Head of Big Bash Leagues Alistair Dobson commented on the fixture in what will be his first season at the helm.

“The off-season has provided the Big Bash team time to assess research and fan feedback, helping us identify some key opportunities to give our fans an improved BBL|09 fixture.

“This is a great fixture for the league, our clubs and most importantly our fans. We’ve listened and now have a shortened fixture, more consistent timeslots, a continued regional footprint and a stronger finals format which will give fans the best opportunity to experience the BBL. 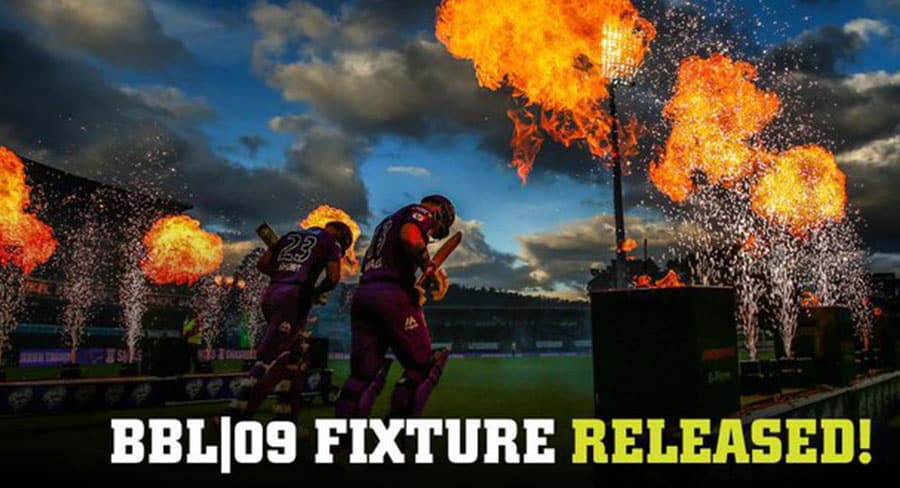 “The finals format has been set to make it the best possible end to the season, rewarding the top two teams with a double chance and giving the winner hosting rights of The Final. At the same time, it’s a more challenging and entertaining prospect for fourth and fifth to go on and win the competition.

“Our previous finals model didn’t do that, with fourth winning the competition twice and reaching four grand finals, compared to the top team which has made just two grand finals, winning just one of them,” he said.

The new system benefits fans by having the finals played across two weekends. The host of The Final will be locked in a week in advance, giving fans the best chance to plan and experience finals cricket.

The finals will be the end of the ninth Big Bash season which will be played in more than 12 venues around the country.

The Gabba will add the BBL to its list of season-openers alongside the first Domain Test earlier in December when the Brisbane Heat and Sydney Thunder kick off BBL|09 on December 17. 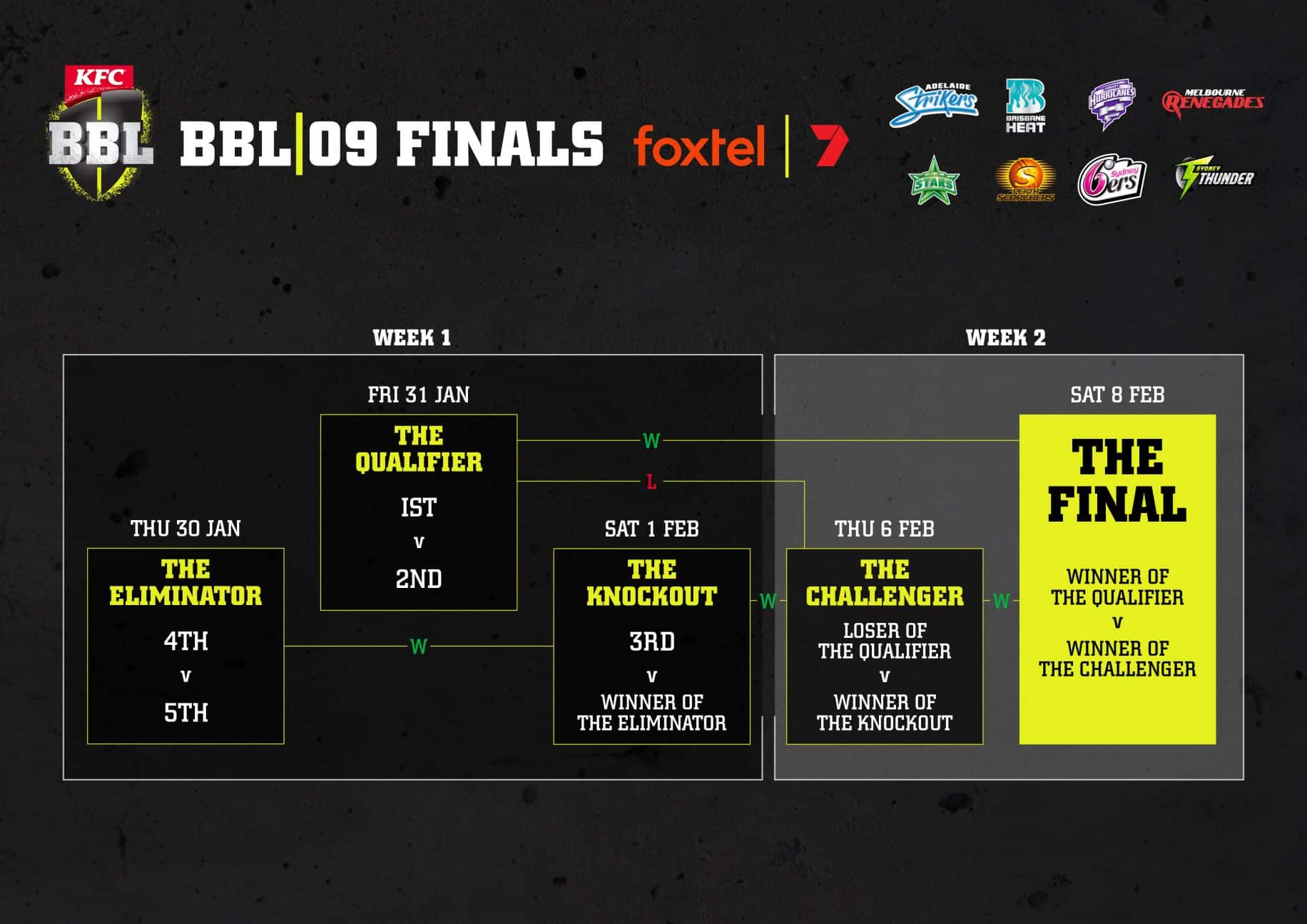 The Sydney and Melbourne Derbies return, highlighted by the BBL|08 Final rematch between the Stars and Renegades at the MCG on January 4, along with the Sixers and Thunder at the SCG on December 28.

Geelong will again host BBL cricket at GMHBA Stadium, while Hobart will host a match in Alice Springs for the first time as the League continues its commitment to taking the Big Bash to regional fan bases with more fixtures set to be announced.

The Big Bash is going to end with a bang with seven matches in four days across the January long-weekend.

The season will reach its crescendo on the Monday public holiday with the reigning champions, Melbourne Renegades, taking on the Brisbane Heat at Marvel Stadium in the final game of the regular season.

KFC BBL|09 will continue to reach fans far and wide, with Foxtel and Seven covering the Big Bash action. Foxtel will broadcast all 61 matches, including 16 matches exclusively, Seven will broadcast 45 matches across the season, including the finals series.

“At Fox Cricket we’re over the moon about being the only place to televise every game of BBL|09 – Gilly, Warnie, BJ, Kerry O’Keeffe, Isa Guha, Mark Waugh and the rest of our crew are counting the days to summer.”

“The compacted BBL|09 Fixture is a winner for fans and our viewers, offering matches almost every night of the season through the school holidays live and free on Seven,” he said.

“The expanded finals series will deliver five matches all in prime time, while giving those who finish higher on the ladder a better chance of winning the title.

“And with five teams now battling it out for the finals, we are more likely to see competition for those finals spots go right down to the wire.

“We also can’t wait for the ‘Mega Days’, where fans will enjoy the Melbourne and Sydney Tests from morning to afternoon, followed by Big Bash at night. Bring it on!”

Fans can follow BBL action across Macquarie Sports Radio in Brisbane 882AM, Sydney 954AM, Melbourne 1278AM, and Perth DAB+ and SEN1116 Radio in Melbourne, while 6PR in Perth will broadcast all Perth Scorchers matches. BBL|09 match broadcasts will also be available nationally via Macquarie Sports Radio, SEN1116, and Cricket Australia’s digital channels.