The standouts this week involve international controversy, a new entry, and a show continues its walk up the chart.

Stranger Things has now made it 17 weeks in a row atop the Australian TV Demand charts and 16 of 17 in NZ, with the record for consecutive weeks on top of the charts sitting at 19 by Game of Thrones. Over the last 36 weeks, only two shows have topped the Overall TV Charts in Australia with Stranger Things also topping the Digital Originals chart too boot.

The standouts this week involve international controversy, a new entry, and a show continues its walk up the chart.

South Park has entered the charts this week after causing an international stir by being banned from China after the episode fittingly named Band in China. In the show’s, 299th episode Randy Marsh tries to expand his marijuana business to China and ends up in a Chinese labour camp. The episode also mocked American organisations such as Disney and the NBA for doing business dealings with China, and the censorship of Winnie the Pooh after the character was compared to China’s President Xi Jinping.

The episode angered Chinese censors, who wiped out video clips and discussions of the show on major platforms, such as the social network Weibo.

South Park creators Trey Parker and Matt Stone, issued a statement on their most recent stir:

“Like the NBA, we welcome the Chinese censors into our homes and into our hearts. We too love money more than freedom and democracy. Xi doesn’t look just like Winnie the Pooh at all. Tune into our 300th episode this Wednesday at 10! Long live the Great Communist Party of China! May this autumn’s sorghum harvest be bountiful! We good now China?”

Peaky Blinders also joined the TV Demand charts this week after the British crime drama created by Steven Knight, released its fifth season on August 25 2019. Cillian Murphy stars as Tommy Shelby, the leader of the Shelby Crime Family who operate in Birmingham, England, in the aftermath of World War I. The fictional gang is loosely based on the Peaky Blinders, a  19th- century urban youth gang who were active from the 1890s to the early twentieth century.

The six-episode fifth season aired its season finale on September 22nd with Knight confirming a season six and possibly seven are planned for the future.

The Walking Dead is now second on the Overall TV charts in both Australia and New Zealand after re-entering the charts three weeks ago and releasing the first episode of its 10th season last week on October 10. With the show being the 2018 Global TV Demand Award’s Most In-Demand TV Show, it appears the biggest threat to ending Stranger Things streak before it breaks Game of Thrones record for most consecutive weeks on top of the charts in 2019. 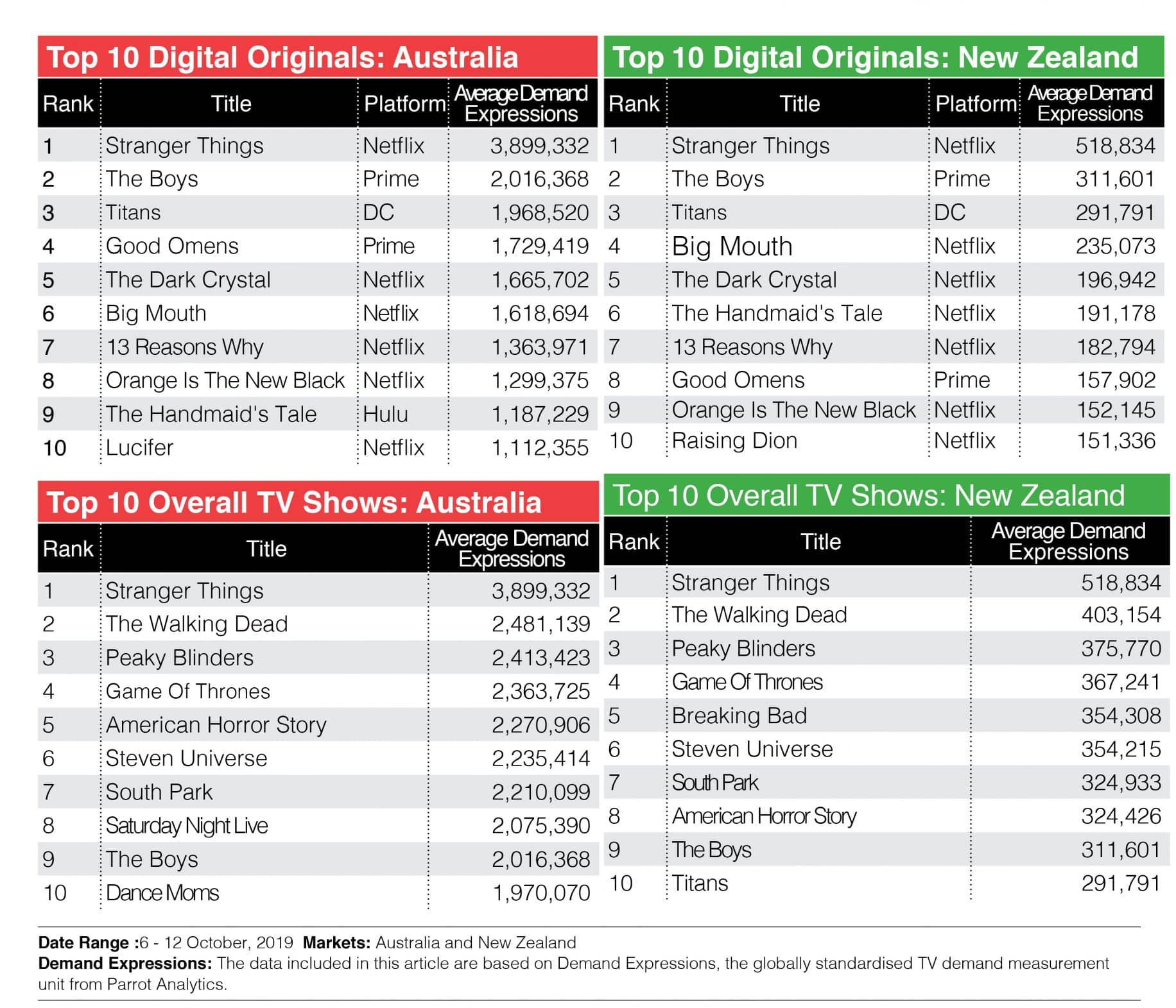