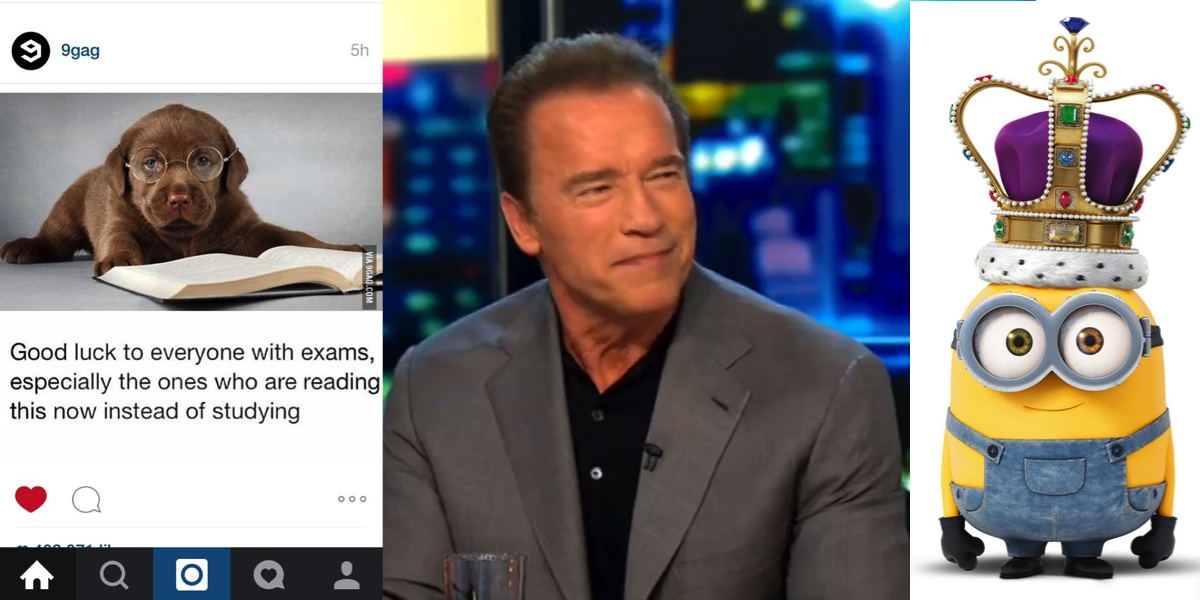 Trending at Mediaweek: Minions, catchy tunes in foreign languages, Instagram and life + Arnie on The Project

1. Instagram and life – how the photo app may understand you better than a human.

A) For people who watch the evening news bulletin

Good Morning to you ..! It's hard to argue .. #news #journalism #AsAJournalist

B) We’ve all been there.

Not that I understand a word of the lyrics of this song but it’s just a catchy tune. It even has a choreographed dance to go with it! Nossa, nossa!

3. Arnie on The Project

Out to promote his upcoming film Terminator Genisys, the 38th governor of California Arnold Schwarzenegger talked about a range of topics from what he would do if he were back in office to his return to movies. He also dished up a few of his legendary dialogues including the evergreen one: “I’ll be back.” The multitalented Austrian-born did not hold back from self-praising. And, why would you if you were the terminator?

The prequel to the Despicable Me franchise, releasing in Australia on June 18, tells the tale of the yellow oval-shaped beings who rose to fame for their largely incomprehensible language, innocent childlike character and laughable antics. The movie has been widely publicised with Kevin’s (a minion character) face plastered on buses and around Sydney’s transit network via APN Outdoor. Even the Australian banana industry turned to the film to cash in on the “banana-loving antics of the Minions” as the ABC puts it. Also releasing on the same day is Pixar and Walt Disney Pictures’ animation film Inside Out, which has been inarguably far less publicised compared to the Minions. Mediaweek’s Brian Watson is tipping it to be the better of the two movies but I argue otherwise. Which one do you choose?

Just over a month ago, YouTube rolled out its offline feature in the Indian market. By tapping on the offline icon, the users can save their videos to be viewed at a later time without internet connectivity. The feature hasn’t been made available in Australia as of yet but according to Gizmodo Australia, the giant video-hosting platform is working to make this happen here soon.
There is no word on how advertising will be supported with this new feature.