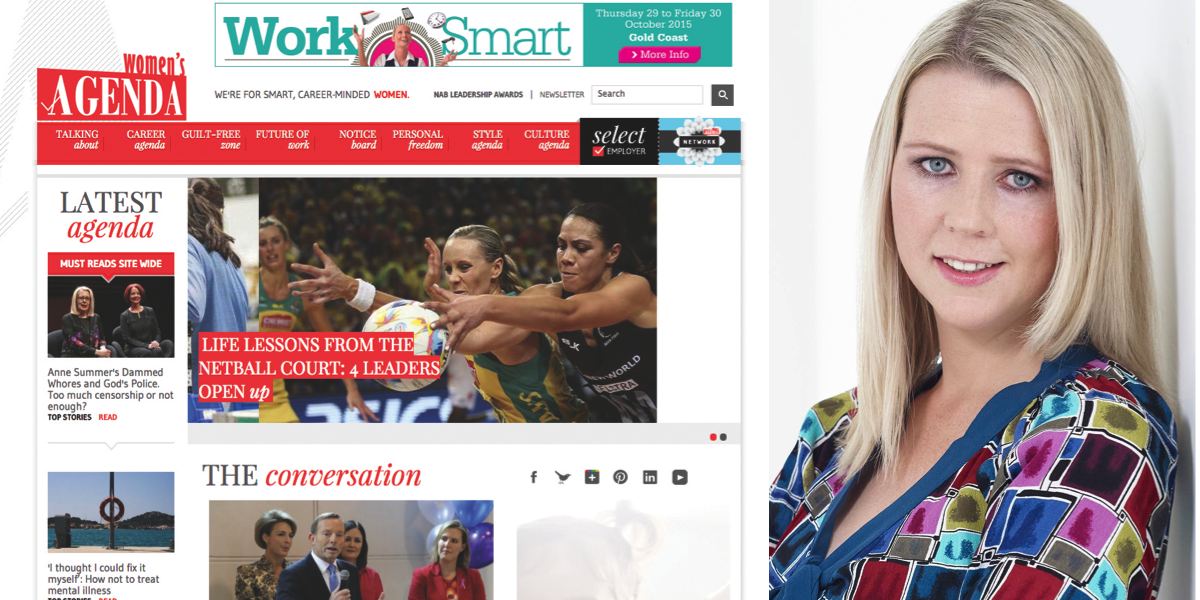 Celebrating three years of Women’s Agenda with publisher Angela Priestley: “We saw a gap for people who are professionally focused”

The digital destination for career-minded women, where women (and men) help women achieve” is how Private Media’s Women’s Agenda describes itself. Unlike most female-focused publications, the Eric Beecher-owned site aims to speak to women primarily about the workplace. The careers over clothes model is clearly working for the site, which averages 90,000 – 150,000 monthly unique views. It also just celebrated its third birthday. Publisher Angela Priestley told Mediaweek the site was initially founded to fill a gap in the market. “We could see there was a gap to really speak to career-minded women. There are lots of publications out there, and a lot of female-focused publications in particular, as well as a lot of women’s content being shared online and in magazines. But we saw a gap for people who are professionally focused, who want more career information and political and business stories that are relevant to the lives that they are leading. Originally, we started with a slight slant of having work fashion on the site too. We’ve found that people are curious about what other people are wearing, but it wasn’t a huge traffic driver on the site. It kind of got in the way of the other messages we were trying to send, so we’ve moved away from that in recent years.”

Priestley was quick to note the site doesn’t pigeonhole its readers or appeal to a particular demographic. “Their lives may or may not involve kids, it could involve various things going on in their careers. It’s for people who are ambitious and want that information and advice, and to be a part of a community of women who are all in this together. The content is about profiles of women in business and leadership, we also follow issues around childcare and paid parental leave and the representations of women in politics. We write a lot about flexible work too. we see the site as having an underlying theme – currently the workplace isn’t really working for men or women, and we all need to be part of shifting the status quo and shaking things up so it’s better for all of us.”

Women’s Agenda also addresses issues that aren’t strictly speaking work-related. “Part of our content will always be work-life balance, that’s a long-term issue. We do a lot of health, we report a lot on domestic violence – we’ve ramped that up a lot this year, like a lot of publications have. We do see it as a workplace issue, because women are the most heavily impacted by it and the workplace can be like a sanctuary sometimes. We push our readers to be alert to the signs and understand the rates of how often this is occurring and how to help people in that situation.”

Priestley noted that Women’s Agenda’s content is evolving, although not as quickly as she might hope. “Some of the themes we cover will continue, because unfortunately things aren’t moving at the pace we would like. I probably wouldn’t have said three years ago when we launched that we’d go backwards in terms of women in cabinet and women in politics. I probably would have thought we would have made more progress around the number of women on boards and in leadership and management positions. We have made some progress, but it has stalled quite a bit.

“One of the changes we have seen – which I think is particularly driven by our Male Champions of Change – is that there are more and more men involved in the conversation around the importance of workplace equality. It feels like we no longer need to argue the case for workplace diversity, people seem to appreciate having more diverse teams with women and more diversity in terms of sexual orientation, race, educational background and all sorts of things. That engenders better results for companies in the long run, and there’s been a big shift in thinking towards that. It’ll be interesting going into the next election to look at paid parental leave – that was a campaign point last election, but we’re in a completely different place now to where we were then. We’ll also be keeping a keen eye on childcare and domestic violence, and how irritated people are getting with the lack of female representation in those positions of power.”

As well as celebrating three years of online publishing, the site has made some staffing changes of recent. Editor Georgie Dent is leaving Private Media for a role at Mamamia, and has been replaced by Jane Gilmore, former editor and publisher of The King’s Tribune who has been working at Women’s Agenda as its contributing editor. “We’re disappointed to see Georgie go, she’s been an excellent editor as well as a very talented writer. But we always see things as an opportunity, so we’ve got Jane on board.”

Priestley herself was previously editor of the website. “We launched three years ago with Marina Go, who is now at Bauer. Originally, I edited the site for the first year. Then I went on maternity leave and Georgie stepped in, and that’s when we had a shake up. I took a publishing role, and Georgie became editor.”