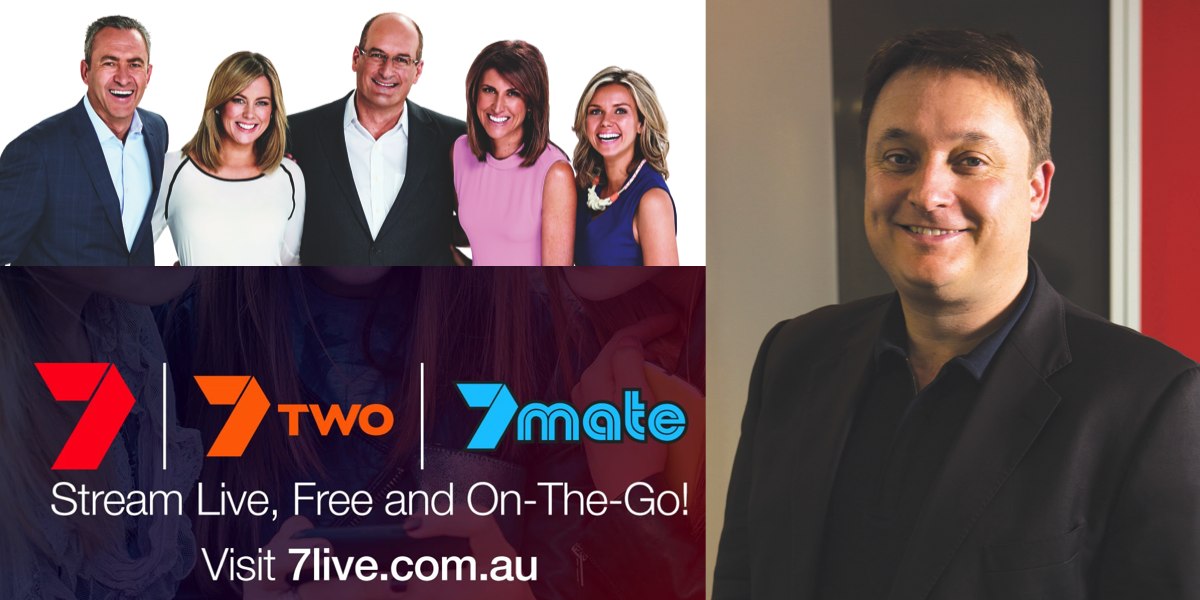 Seven West Media chief digital officer Clive Dickens on streaming: “I was always fascinated why no broadcaster here had decided to stream anything”

It hasn’t taken Clive Dickens long to make a major impact at Seven. Just over six months into his term at the FTA broadcaster, Seven has announced it will be streaming all its Seven, 7mate and 7TWO channels from December 1.

“Inside my first month I was suggesting we should get on with this. It is about extending television out of home. People love their mobiles. The idea that I could only watch the previous day’s content didn’t make sense to me. We have been sprinting behind-the-scenes to get it up and running. We have launched streaming of Sunrise and The Morning Show and we will have all 37 channels from Cairns to Melbourne to Perth streaming by December 1.”

One of the big roadblocks that had been stopping this in the past was being able to measure the audience watching the Seven stream on different devices. “That was the thing that really made it possible. I had joined an industry that already realised that cross platform measurement was going to be critical. Nielsen in the US and BARB in the UK, with a project called Dovetail, are working on it and we have a project called AMD (audience measurement across devices) and Doug Peiffer and his team at OzTAM have done an incredible job trying to solve the cross-device measurement challenge.

“The OzTAM board are reviewing the technology and all of the networks have been testing the OzTAM tags. The OzTAM board will hopefully make a decision before the end of the year where we can have an Australian-first independent measure of television consumption across every screen including out of home.”

The broadcasters have always been able to measure the number of streams via their own data. Dickens noted: “The two challenges of analytics data is it is not a people metric, and it is about devices. The advertising industry don’t want to reach devices, they want to reach people. It is really important to our partners that we put people numbers behind the data, which means you have to have a panel.”

Dickens has been spending time at Seven West Media’s broadcast centre in Melbourne where all of the Seven signals are distributed. “I went to visit there in my first week and found we had no permanent encoding of our channels for streaming. The first technical challenge was how to get the broadcast channels into a form that can be decoded by device. That involved spending a lot of money. Equipment started to arrive on the loading dock – there were servers and colleagues had to trust me when I said it was needed for encoding and transcoding to ensure we can get all of our streams onto devices.

“Next we had to look at the product experience. Although we have now launched Sunrise and The Morning Show, we won’t be limiting the streams to Plus7. We want to take the streams to anywhere we can independently measure it and monetise it. We have already indicated we will allow people to watch Seven streaming on other Seven apps.

“We will also look at the opportunity to extend live streaming into other products as well. We don’t limit our television to certain manufacturers, we put it everywhere. We are promoting live TV everywhere and the one hero brand will be Plus7.”

As to how the content will adapt to various devices and operating platforms, Dickens said content suppliers are naturally concerned about several issues including piracy. “Encryption is very important and we have tried to simplify the encoding which can get very expensive when doing different versions for different platforms. For live streaming we will be encoding around what is called Encrypted HLS
[which is the Apple encoding technology] which is the dominant form of encoding
for all devices.”

That solution will work for all sorts of phones, platforms and devices including tablets and game consoles. “It will be a progressive rollout,” advised Dickens. “Plus7 is available on 14 different devices and not all of them have Live on them. Android, iPad, iPhone and web have streaming from now but as you can image as you go down the long tail of incremental devices it will take time and resources to upgrade those products.”

>> From radio to television

“I love it, my job is so much more than broadcast,” said Dickens. “I am working with the newspaper publishing business in Western Australia and also working on what is becoming increasingly an e-commerce and vertical video business at Pacific. With 76% of Seven West Media earnings coming from television that still takes a huge amount of my time.

“While I had limited television experience before joining Seven, the experience of working in broadcast is very familiar and welcoming to anyone who has had a broadcast career. I sometimes wondered if there was much in common between radio and TV and I realised there is a huge amount in common around broadcast.”

Dickens said he likes to think his lack of TV experience helped at times as he asked some questions that hadn’t been raised for a while. “The first question I asked was why we weren’t bringing our favourite live programs to people’s favourite new televisions. It hasn’t been asked much before because people would talk about regionals and reach rules and costs and rights. They gave me all the reasons why no one had ever done it, but they hadn’t really focused on the fact that consumers now demand it.

“Having first streamed a radio station in 1995, it was something I thought was pretty common. This was just encoding a file and I was able to offer a new perspective.”

On the other hand, Dickens revealed he had a few suggestions that haven’t been acted on yet! “I like to think of myself as an internal disrupter. There is no such thing as a silly idea I’m told often in meetings. I try not to encroach into other areas, for example, content and programming. I am not a television programmer which is a fantastic skill. I am a good armchair critic on television content. I sit on the sofa and watch things from Cats Make You Laugh Out Loud to Winners & Losers and marvel at the people who make them.”

He also admitted to consuming more TV than he has in the past. “My radio habits are now a lot of podcasts and obviously breakfast radio, which I can’t get up without listening to. I am glad to hear Hamish and Andy back and they are a real gamechanger and I am thrilled for my former [SCA] colleagues and the success they are now having.”

When asked about the growth of SVOD and the impact on television, Dickens said he thought the mid-ground for audiences was live broadcasting on all devices. “For me it is not so much about the technology or the platform, but about hits. I lived through the launch of Netflix in the UK and no one cared until House Of Cards. Now they care because they have hit after hit. It is not about the technology, it is about the content. If you simplify the product experience and focus on the stories and the content then people will watch it. You have to invest in all the businesses – we have AVOD, SVOD, TVOD and now live streaming. It is now very hard for a television company to operate in only one or two of those businesses. We are in the screen business and we want to own the stories on those screens which might be scripted drama or reality. If we can’t own the stories we want to own the rights to monetise the stories on every screen. We have to have the business models to get a return on investment. And it is all television.”

The former Southern Cross Austereo director of digital and innovation was hired by Seven West Media for his extensive digital and broadcasting experience across three decades in Australia, North America, the United Kingdom and Europe. Prior to joining Southern Cross Austereo, Dickens was a co-founder and non-executive director of Radioplayer, a joint venture between the BBC and UK commercial broadcasters, and co-founder and COO at Absolute Radio. He has also been an adviser to the founders of Shazam, where he remains a shareholder, and numerous other digital start-ups.[/blockquote]