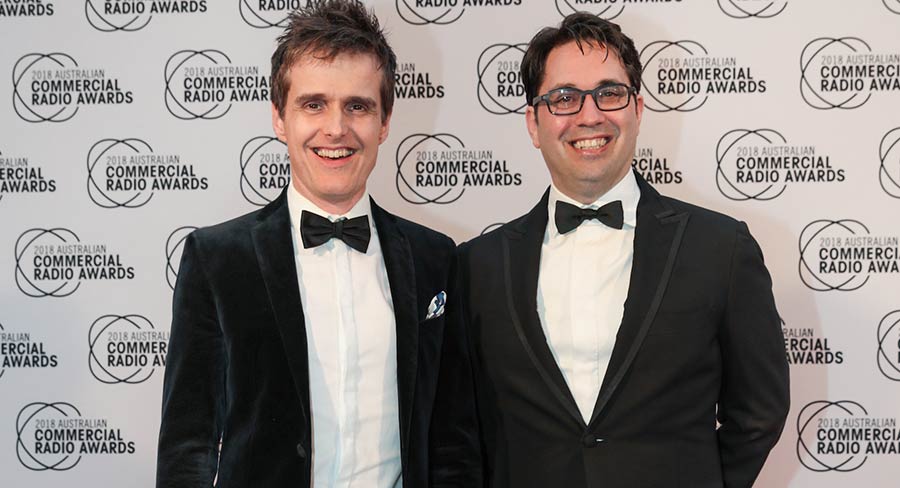 • Prior to the new ACRAS song, hosts Julian Morrow and Andrew Hansen had a number of announcements

Guests who sat through the near four-hour awards show on Saturday night were unanimous with praise for the talents of the hosts who made it all the more bearable.

Prior to the new ACRAS song, hosts Julian Morrow and Andrew Hansen had a number of announcements:

After jokes about the non-appearance of Alan Jones and Kyle Sandilands, the hosts said, “For the first time we are introducing the (Barry) Hall of Fame for the person least likely to work in radio ever again.

“There are a couple of other new categories…

“There is an ACRA this year for the loudest fake laughter in a breakfast radio promo and a new award for the most expensive billboard campaign for a show that didn’t rate.

“And there’s an award for the best top-rating Melbourne breakfast show inexplicably axed by Gold FM.”

Hello there, radio people, let’s get this on the road
We’ve lots of awards to get through
The official term is a fuck load
This year we have given the format a tweak
So Ray Hadley doesn’t speak
And here’s another fact to keep you feeling happy
There’s only five more hours until the after-party
A quick show is a good show, and we would end it now if we were able
If only to save the poor sods, stuck at Em Rusciano’s table
But here’s some hope to cling to, and a reason not to flee
The party’s nearly here, and if you need to score some gear, the Nova suits are just the guys to see
Let’s agree no speeches as they only make it drag
It’s the ACRAs, not the Nobel Prize, so winners need not brag
You didn’t cure some disease, or bring peace to warring nations
You simply wrote a promo, for some shitty digital stations
If the show seems long, don’t die of a boredom fit
Another death just adds more time to the In Memorium bit
And a final bit of housekeeping from the hosts at the start of the night: “No smoking inside the room, no drinking outside the room but, smoothfm, you can take your Valium and Ambien wherever you like.”