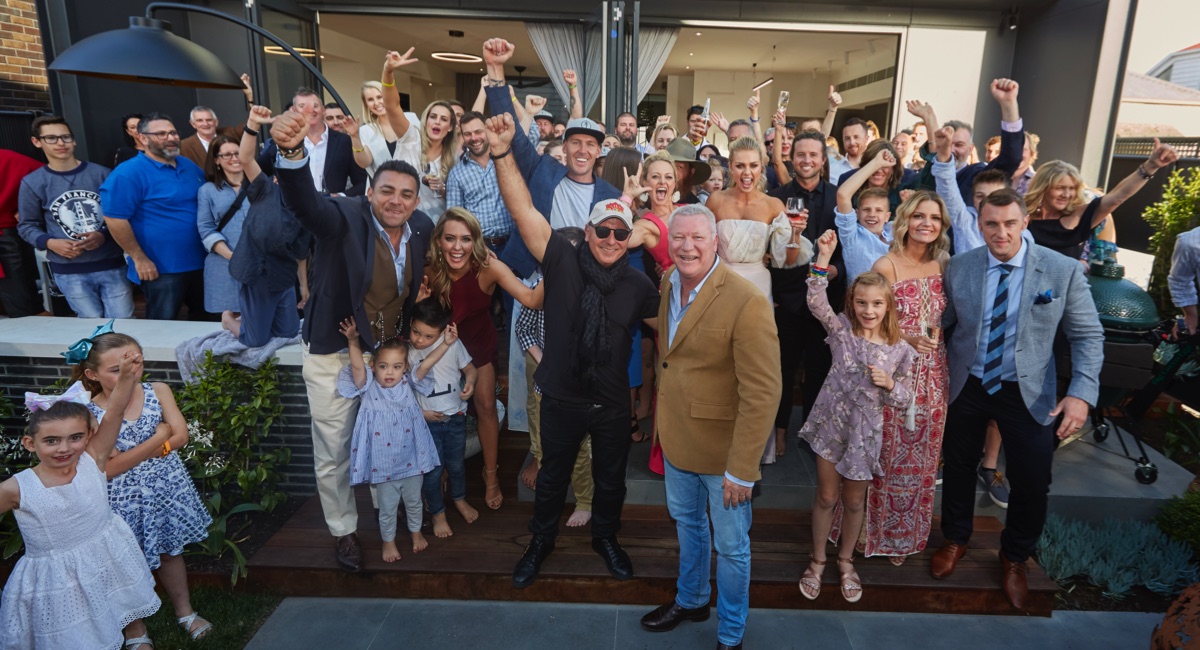 For much of 2017 a quiet suburban street in the Melbourne suburb of Elsternwick has been transformed into a busy building site and TV series location.

Last year The Block EPs Julian Cress and David Barbour convinced Nine to buy a large piece of land in the street for a reported $9.6m. The producers subsequently moved five period homes earmarked for demolition onto the site and let the 2017 Blockheads loose with a brief to turn them into dream homes.

Those five homes had their final day in the media spotlight on Saturday October 28 when they were offered for auction starting at around 1pm with the five properties earning $14.12m – four sold at auction and one immediately after being passed in. $1.22m of that went to the contestants – plus another $100,000 bonus thrown in for the winner.

The auction order and the auction reserves had been decided the day prior in front of Nine’s cameras as part of the pre-sale buildup for the final episode of an exceptional year for the show. 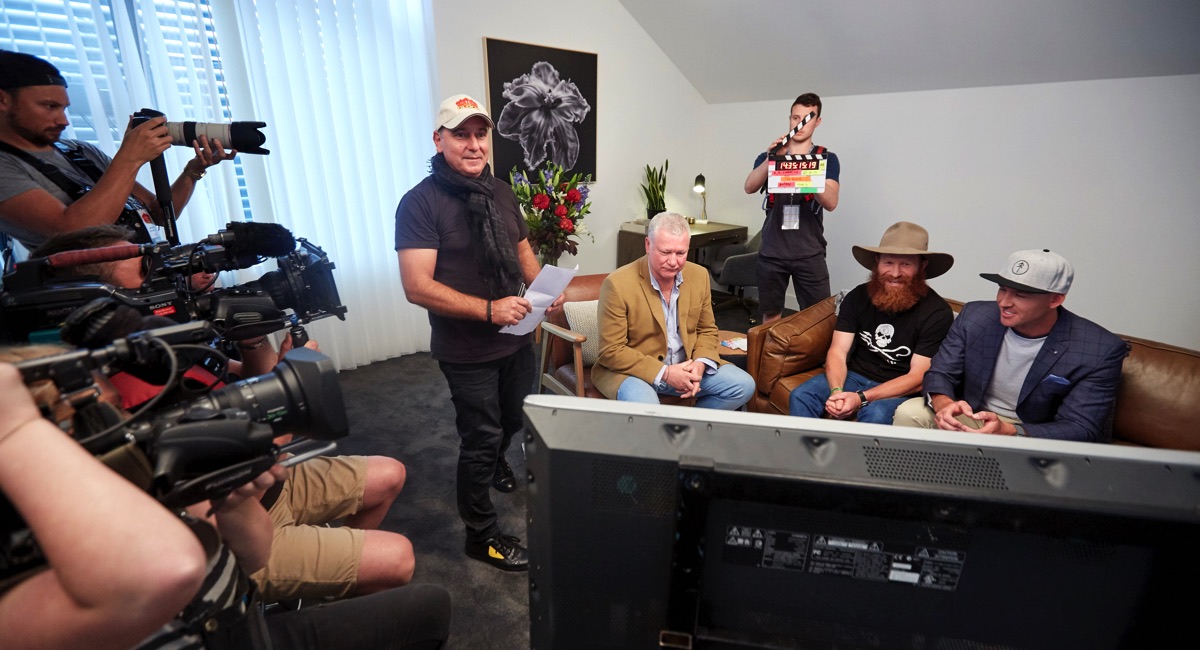 In The Block’s situation room on auction day [L-R]: Julian Cress and Scott Cam with Wombat and Sticks

A huge crowd managed to squeeze into the living area of the first home to be offered for sale. The crowd included the auctioneer and his support team, interested bidders and buyers agents, a handful of media doing their best to look inconspicuous (done with varying levels of success) together with five cameras and production crew including people carefully placed in the crowd with a microphone ready to grab comments and bids from interested parties.

Nine had traffic wardens keep order in Regent Street on the day of auction while format co-creators and executive producers Cress and Barbour moved around the site between the auction rooms and the Blockhead reaction rooms and the NEP trucks onsite where the coverage was being monitored.

The first auction can be a major asset when it comes to making the most money, but it is certainly not always the case.

The home renovated by Josh and Elyse was predicted to possibly push over $3m and it did. The surprise buyer was comedian Dave Hughes, who stood quietly at the back as his buyer’s agent waited until the home was on the market before he went into battle with another buyer’s agent Frank Valentic. 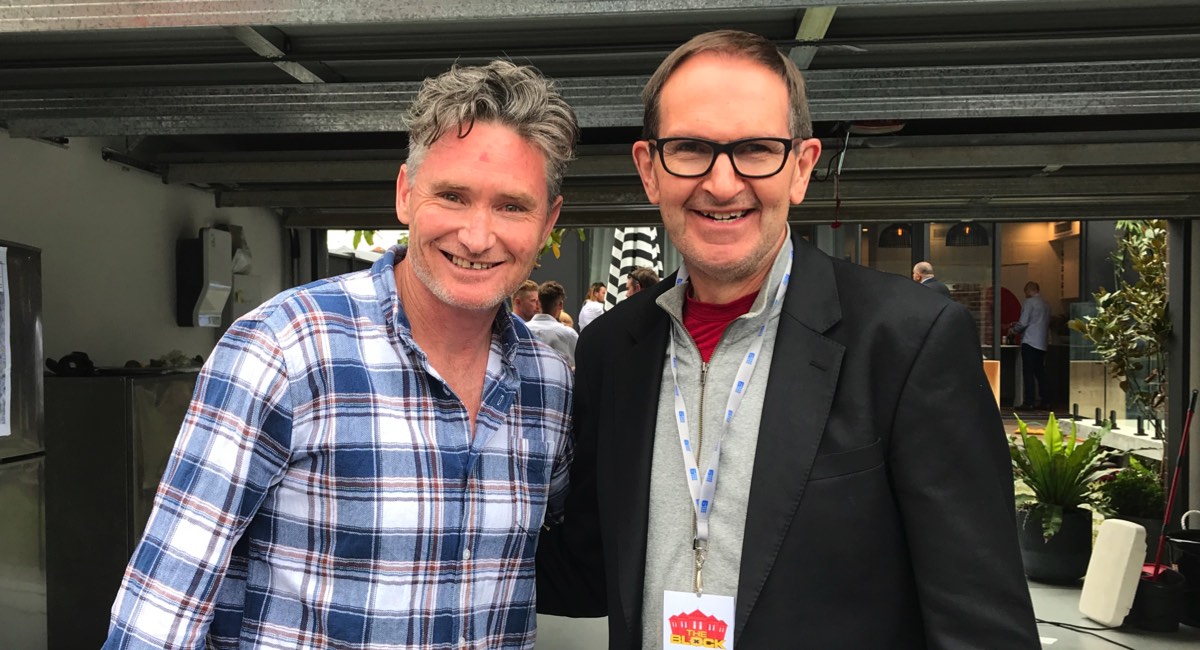 Mediaweek was standing right in front of Hughesy, who was clearly wanting to keep a low profile. However, a winning smile crept across both his agent and the comedian’s face when they exchanged glances as the hammer dropped on the property.

Hughesy made a few jokes to his small entourage about needing to keep working pretty hard to pay the mortgage. He will no doubt be helped by Southern Cross Austereo who have signed him and Kate Langbroek to replace Hamish and Andy, TEN who will be screening his new series We Have A Problem, and to his live shows throughout 2018 which include the debut of a new show, The Snorkeller, at the Adelaide Fringe Festival in February before he takes it to the Melbourne Comedy Festival.

Hughesy was unable to initially get his wife Holly on the phone to tell her about the acquisition to their property portfolio as she was on duty at a kids birthday party.