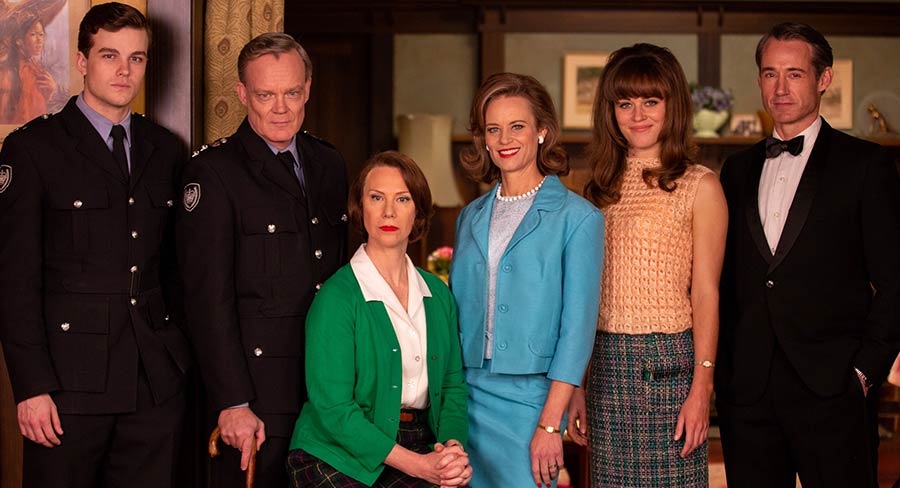 For the much-anticipated telemovie The Blake Mysteries, Seven is sticking to its traditional Friday night 8.30pm timeslot, which is where it ran on the ABC for four seasons.

To help foster interest in the characters 7Plus now has all four seasons of the original The Doctor Blake Mysteries starring Craig McLachlan and Nadine Garner. Seasons one and two each had 10 episodes, while three and four had eight each. That’s a total of 36 episodes to keep viewers who are new to the characters entertained across the summer.

The series’ central character is now Jean Blake. In this telemovie she is drawn into the investigation of several bizarre murders whose only connection seems to be a series of articles recently published in The Courier about Ballarat’s most infamous unsolved mysteries.

It’s a mad, mad world. President John F. Kennedy has been assassinated, the world has changed and tremors are being felt even all the way to Ballarat where Jean Blake (played by Nadine Garner) is unexpectedly drawn into the investigation of a pair of murders.

No one knows the town’s history better than Jean and she’s determined to help, despite pushback from chief superintendent Matthew Lawson (Joel Tobeck).

Jean’s whole world has fallen apart with Doctor Lucien Blake (Craig McLachlan’s former character) missing, presumed dead. But that same inner strength that got her through the losses of war and enabled her to raise two sons on her own will not allow her to be defeated.

Ably aided by friends – chief superintendent Matthew Lawson and newly appointed police surgeon, Dr Alice Harvey (Belinda McClory) – Jean is about to throw herself back into a world she thought she had left behind.

The telemovie premieres on Seven at 8.30pm tonight, November 30.

It will then be available to view on 7Plus along with all 36 of The Doctor Blake Mysteries.

Fiction: Everything changed for Jean Blake the day she married Lucien Blake. All those sordid rumours about the doctor and his housekeeper were finally put to bed.

But happily ever after was never on the cards for Jean. Two years after their wedding, Lucien disappeared while in pursuit of a killer. Any other woman might feel her life was over. But Jean, ever practical and pragmatic, found a way to continue, getting through one day at a time.

Jean has long been the fount of all local knowledge – a skill she soon put to use as a newly elected member of local council. Everything Jean has learnt over the years by watching and studying both Blake and his father before him is now going to stand her in good stead, as she finds herself more and more drawn into a world of murder and mystery.

Jean knows people – she understands them. She can see what makes them tick and why they are what they are. She can see beyond the obvious, what made them do what they did. It’s a blessing and a curse, and Jean has no choice but to do the right thing.

But beneath it all are her own fears that she’s kidding herself, that deep down she’s still just Jeannie Randall, the poor farm girl, the woman who never left Ballarat, the Doctor’s housekeeper. Surely it’s only a matter of time before everybody realises it.

Fact: Nadine Garner is one of Australia’s most respected actors. Her career has spanned film, television and theatre for more than 25 years. After The Blake Mysteries telemovie, Garner will next be seen in Ben Hackworth’s debut feature Celeste. She most recently starred opposite Craig McLachlan in the ABC’s The Doctor Blake Mysteries, on stage for the Melbourne Theatre Company in Di, Viv and Rose and National Theatre’s A Little Night Music.

Garner’s other television credits include Channel 7’s City Homicide, the ABC comedy It’s A Date, Blue Water High, The Henderson Kids, G.P., The Flying Doctors, Boys From the Bush and Raw FM, for which she was nominated for an AFI Award for Best Actress in a Television Drama.

In 2011, Garner wrote and directed the short film Afterglow, which was nominated for an AACTA Award for Best Screenplay.