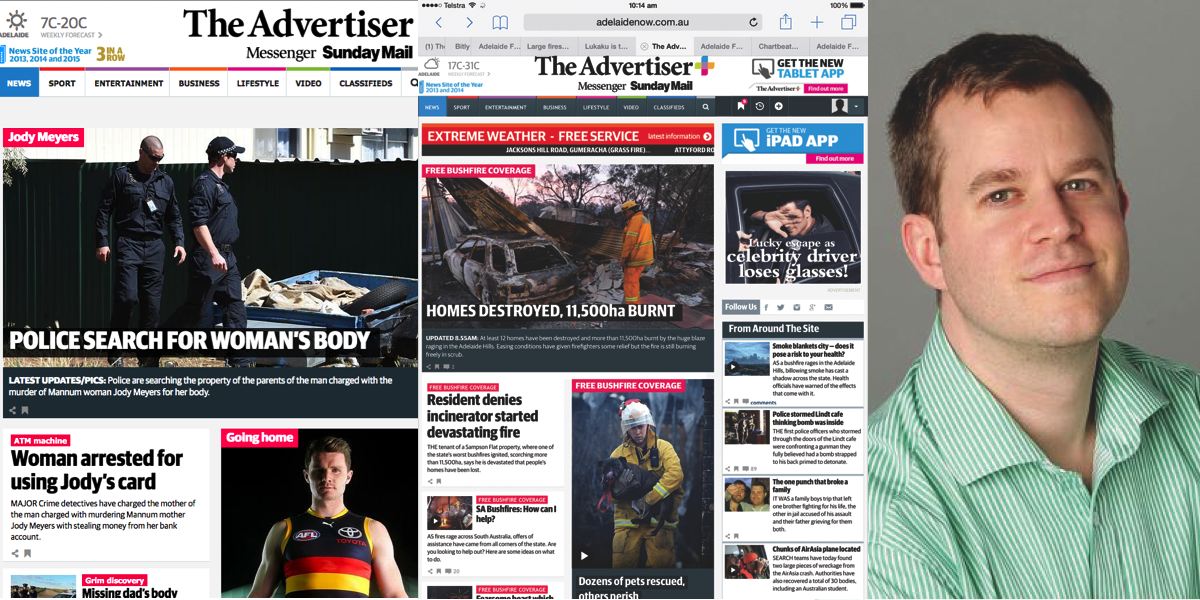 At the annual Newspaper of the Year Awards where winners often string together a winning streak, the website of The Advertiser in Adelaide stands out with a special achievement.

The site has won the PANPA Award for News Site of the Year three years running and a win in 2010 makes it four wins in the past six years.

The digital editor at The Advertiser, Michael Owen-Brown, told Mediaweek: “I told my team that winning once was a great accolade, twice was a tremendous honour and it was really hard to find the superlatives to describe the hat trick.”

The one question that everyone wants answered is what is happening at TheAdvertiser.com.au that is not happening elsewhere? “We have always had a close focus and connection with our local community. A lot of websites would say that. When you are chasing traffic and visitor numbers it is really easy to opt for the cheap wins like Hollywood scandals etc.

“We will try to give our readers what they want to read, but we also maintain a close focus on stories that are relevant to their lives, stories that affect South Australian communities and neighbourhoods.”

“Increasingly journalists understand
they need to embrace social media for
story gathering and building their
own brands and networks.””

One of their best decisions was integrating the content from the Messenger suburban newspaper group, said Owen-Brown. “That allowed us to offer a very strong base of interesting community content. When merged with The Advertiser’s city and state-wide hard news it became a really compelling mix of content.”

Owen-Brown oversees all the digital products at the newspaper and also the iPad and mobile apps. He noted the team takes enormous pride in being seen as the frontrunners in digital publishing in Australia. “We have always had a culture in Adelaide of pushing the boundaries. When you work for a big company it can be good to be working on one of the smaller outposts. You get a bit of leeway to forge your own path.”

The Adelaide website has launched a number of initiatives this year, one of them a partnership with the Clipsal 500 motor race. “It was called Australia’s Great Adrenalin Rushes although we didn’t want it to be just a branded product. We created a new template and used images and video. We brought in a social media element where people submitted their best adrenalin rushes and it was mapped on a map of Australia. That managed to win the International News Media Award (INMA) for Best Marketing Solution for an Advertising Client in New York earlier this year.”

As part of the News Corp Australia metro newspaper group, TheAdvertiser.com does adhere to the company digital template, but it does go off track often. “We have scope to create our own modules. Until this year Footy was just a module on the home page. For us it is more important so we created a new Super Footy module and elevated up the page. It gave the content much more prominence.”

As to what guides their decision making, Owen-Brown said, “When I started in 2008 much of what we did was gut instinct driven. The only meaningful analytics we got then were either at the end of the day or the end of the week. Now it is a combination of the two.

“There is no way we outsource our journalism to the analytics tools we use, but equally they give us invaluable insights into what is resonating with readers and how long they are staying with each piece of content.

“You can’t fly blind – it is massively important you know what stories are working and what aren’t. I tell my team that if we have a good story, but the analytics tell us it is underperforming, that is not a prompt to dump it. It is a prompt to review the way we are presenting it. We use the numbers to inform the decision making, not to overtake the decision making.”

Owen-Brown paid tribute to his team, in particular to his deputy Greg Barila. “He has brought some terrific ideas and he stays on the cutting edge of developments in social media and story sharing. He has done a lot to spread that not just within the digital team but across the entire newsroom. Increasingly journalists understand they need to embrace social media for story gathering and building their own brands and networks.”

As to what is ahead this year, Owen-Brown said there was a focus on driving traffic to their mobile site. “It is obvious to everyone that mobile devices will be the future of readers interacting with our content. The challenge for journalists and editors is finding a way of using that platform to tell stories. People don’t want to read 1,500 words on a mobile and you need to find a way of getting that information across in a short and snappy way.

“People tend to snack on content more on mobile and monetisation is critical. The mobile peaks are in the morning commute and in the evening when people use their mobile as a second screen.”

The centrepiece of TheAdvertiser.com.au PANPA entry was their coverage of this bushfire back in January 2015. “It is a good example of how we do things differently.” Owen-Brown said most of the media, including their site, was on skeleton staff, and a bushfire quickly broke out on a Friday night. Their team rallied over the next 24 hours to pump out latest updates to the readers. “We not only used the website, but we also flooded social media with information.” The website dropped its paywall for the weekend to make sure the messages reached as many people as possible. “We were the only reliable consistent source of information about the fire across the whole weekend. The team worked ridiculous hours to provide an important community service.”

[blockquote style=”3″]ADELAIDE NOW was the name used by the site for a time, but it has since reverted to TheAdvertiser.com.au. The URL of the award-winning site remains adelaidenow.com.au so as not to harm the site’s audience numbers and Google referrals.[/blockquote]