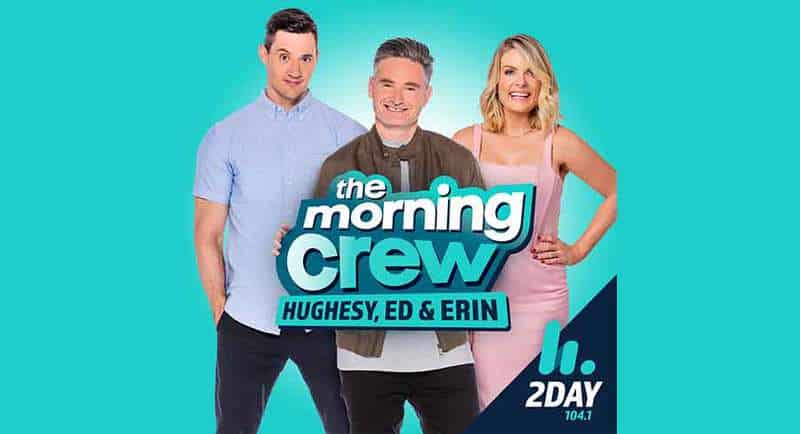 SCA has announced a new breakfast show for Sydney – The 2DayFM Morning Crew with Hughesy, Ed and Erin Molan – kicking off Monday 18 January 2021.

It’s a bit tired to continually harp on about SCA’s unsuccessful attempts at replacing Kyle and Jackie O at 2Day FM, but it’s hard to avoid as the station reveals its ninth breakfast team in nine years.

Hughesy and Ed already have a drive show nationally on the Hit Network and will move to Sydney breakfast next year.

Joining the line-up is Erin Molan, a polished media performer and ACRA winning broadcaster from 2GB who will bolster the duo with her news nous and good-humoured approach to life.

Dave Hughes is one of the biggest names in Australian comedy and his easy, laconic style disguises one of the nation’s sharpest comedic minds. His unflinching honesty connects him to audiences from all walks of life, evident through his prolific career across radio, TV and live stand-up comedy. He will be hoping some of that magic attracts an audience in Sydney. Hughesy’s successful TV shows, The Masked Singer and Hughesy, We Have a Problem make him one of Australia’s most loved national personalities.

Ed Kavalee has also forged a radio career of his own with roles on both Hit and Triple M, including the seminal Get This with Tony Martin. A regular on Network 10’s Have You Been Paying Attention?, Russell Crowe recently remarked that Ed is ‘funny as sh*t’. Gladiatorial high praise indeed. SCA shares that opinion as he has now been part of the three recent 2Day breakfast shows.

Molan has hosted multiple sports shows for the Nine Network and is the weekend sports presenter on Sydney’s number one news bulletin. She earned admiration for her informative and empathic broadcasting on 2GB and 4BC this summer during some of the worst bushfires the nation has experienced and will bring an extra layer of lively to Hughesy and Ed.

Dave Hughes said: “My inbox is already full of DM’s from Sydney real estate agents. Look, I can’t buy all of them but I’ll have a crack! Until then I will be staying in Kyle Sandilands’ pool house. In all seriousness, I have a ball working with Ed and I’m super pumped to be working with Erin. This is going to be a blast. From 10am every day you will find me at the Bondi outdoor gym busting shirtless workouts until my manboobs get rock hard!”

Ed Kavalee added: “I’m fired up to continue working with Hughesy and excited about teaming up with Erin. We have a show ready to roll that I know will deliver the fun Sydney needs in 2021.”

Erin Molan said: “To be trusted with this role is a huge honour and I can’t wait to embark on this new adventure with two of Australia’s comedy greats. Anyone who has listened to me on radio or watched me on TV over the past few years would be surprised that I’ve been brought into the fold as the ‘sensible one’.  I was equally as amused and made sure to sign very quickly before anyone discovers I’m anything but…”

SCA chief content officer Dave Cameron said: “We’re lucky to have a brilliantly hilarious and established show sitting in our fold that Sydney already knows and loves and is ready to hit the ground running in 2021. Hughesy had the number one drive show in Sydney for many years and collectively the crew are all trusted, strong performers in our target market.

“In bringing back a headline breakfast show again to 2Day, it was critical for us to deliver the combination of established chemistry, familiarity, existing high passion for our talent, deep breakfast radio experience and, most importantly, a show focussed completely on Sydney every morning. The 2DayFM Morning Crew with Hughesy, Ed and Erin will bring a clever wit with a show that’s already at the top of its game. We can’t wait to make strong inroads and get 2Day pumping again.”

Head of the Hit Network Gemma Fordham added: “Hughesy and Ed have a chemistry and shorthand that can’t be faked, and our listeners connect to their candour about their lives, kids, relationships and pop culture. Erin is an impressive broadcaster who possesses the rare mix of fun and clout. We will continue to build on a roster of regular guests to bring the 2DayFM Morning Crew to life and we know Sydney will be excited by this show in 2021 – a genuinely funny show to start the day, alongside our emotive ‘feel great’ music format.”

The 2DayFM Morning Crew with Hughesy, Ed and Erin can be heard from 6am to 9am on Monday 18 January 2021.

In addition, an hour of Hughesy, Ed and Erin’s show will be broadcast nationally across the Hit Network at 6pm.