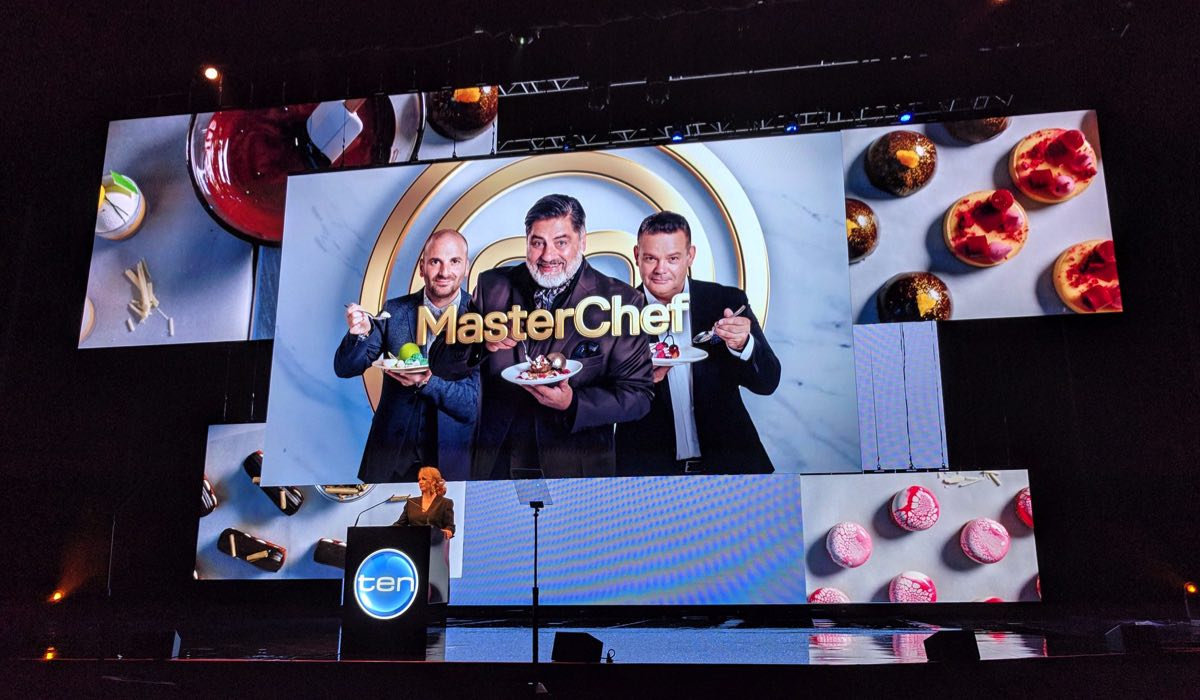 Network Ten held its 2018 Upfront last night at the new International Convention Centre in Sydney. The event was held in the shadow of the impending arrival of new owner CBS. There was no appearance from CBS chief executive Les Moonves, but the broadcaster was represented by Armando Nuñez, president and chief executive officer, CBS Studios International.

The upfront borrowed some items from the CBS playbook including an opening song performed by the busy Julia Morris and featuring a reference to the channel’s challenges with cameos from TEN talent.

TEN has unveiled nine new programs for 2018 and it has recommissioned its successful 7.30pm formats. The network will be relying on people looking for love more than ever with three instalments of The Bachelor franchise plus a revamped Blind Date and then relationship scripted programming How To Stay Married and Playing For Keeps.

Key additions to the early evening will be the already announced Bachelor In Paradise, which is expected to screen after I’m A Celebrity…Get Me Out Of Here! and before the launch of MasterChef season 10.

The other gap in the schedule is November and that is where the Julia Morris-hosted Blind Date is expected to be heading.

Speaking to Mediaweek and Sky News Business after the upfront, CEO Paul Anderson said CBS had been involved in working out the 2018 schedule but it would have more to say about its strategy for Australia after the deal has been finalised. Anderson praised the Network Ten staff for their resilience during what had been a challenging time.

Programming chief Beverley McGarvey noted drama series had been difficult at times in 2017 and she confirmed that the broadcaster was no longer considering miniseries or telemovies after less than spectacular results for Wake In Fright. McGarvey said she is positive about TEN building audiences for US dramas, and agreed that the success of The Good Doctor elsewhere was an encouraging sign for the sector.

The formalities began with a pre-recorded musical performance.

Ten didn’t back away from having a laugh at the past five months it’s been in administration and then finding a backer in CBS.

The song/musical on screen featured Ten’s on-air talent like Waleed Aly, Pete Helliar, Carrie Bickmore, Amanda Keller and Grant Denyer frantic and anxious about their future after the news of Ten’s administration broke. Morris played a comedic but a confident motherly figure reassuring everyone that the “Ten family” will not be broken.

About four minutes after the clip, Morris made a spectacular entrance on stage with dancers. The large centre projector screen rolled up to reveal Morris standing in the middle wearing a silver sparkling dress. The story continued with the live performance, which included Morris being flipped 360 degrees by backing dancers.

“That could’ve have gone horrifically wrong,” she said after the performance that ended with a loud applause from clients and media.

Morris welcomed former Nine presenter Lisa Wilkinson to Ten. “It was like Christmas morning for me when I found out,” Morris said. “I tried to write jokes about it, but I just couldn’t.” (Wilkinson didn’t attend though.)

This is the third year that Morris has hosted Ten’s upfront.

Morris had many nicknames for her boss, but settled to introduce him as the “total dreamboat”.

The first two things Anderson did in his speech were welcome CBS Studios International President and CEO Armando Nuñez, who was in attendance, and thank Ten’s clients for their continued support through the administration process.

“We have the odds in favour of us to take out the award for having the most commentaries in newspapers in 2017,” he said.

The CBS takeover of Ten will be a “game changer” for the company and the local media industry.

Ten’s partnership with MCN has been an “outstanding success,” Anderson said. 2018 will be “a new chapter for Ten”.

“It’s been an interesting five months for us,” Prosser said early in his address. He also took the opportunity to thank Ten’s advertisers for their continued support.

Tenplay has had another successful year, he said. “Despite the ever-growing competition, tenplay saw its video views increase and video starts jump 25%.

“We continue to be focused on our distribution strategy.” Ten has expanded its network of 17 distribution platforms with the addition of Telstra TV2 and Android TV.

Proser mentioned Ten’s new digital stand-alone mobile web platform tendaily. It will cover entertainment, lifestyle, news, opinion and sports with a focus on short-form video content. The target audience for the platform will be 18-35.

Native will be Ten’s key offering to advertisers on tendaily through Ten Stories.

Prosser reminded the room that Ten was the first FTA network to offer dynamic trading. “We have been trading dynamically for the most part of this year,” he said. “It’s not perfect, but we don’t live in a perfect world and competition sometimes gets in the way of pursuit. But that won’t stop us trying.”

The 2017-18 Big Bash League season begins later this year and will run through the summer in 2018. The success of the sporting series will continue to be followed by I’m A Celebrity, Get Me Out Of Here! McGarvey promised a “jaw-dropping list of new celebrities”.

“It’s no secret we have work to do in ensuring that we maintain momentum between I’m A Celebrity, Get Me Out Of Here! and MasterChef,” McGarvey said.

Bachelor in Paradise will fill this hole. MasterChef Australia and Australian Survivor will separate the show from The Bachelor and The Bachelorette, which will air in the second half of 2018. McGarvey also revealed names of some of the Bachelor and Bachelorette alumni, who will be attempting to find love on a national TV show again.

MasterChef Australia and The Project will mark a decade next year. The upcoming season of the former will be a season “full of surprises”. UK chef Gordon Ramsay will make his first appearance on the series and Nigella Lawson will return next year as guest judge.

Julia Morris will host Blind Date, which is a popular British format.

Ten is investing in comedy with new shows Street Smart, Hughesy: We Have A Problem and new Russell Coight’s All Aussie Adventures.

7:22pm: Julia Morris back on stage

The comedian returned to the stage with a performance. And ended the formalities by saying the night is still young so it’s “time to par-tay”.