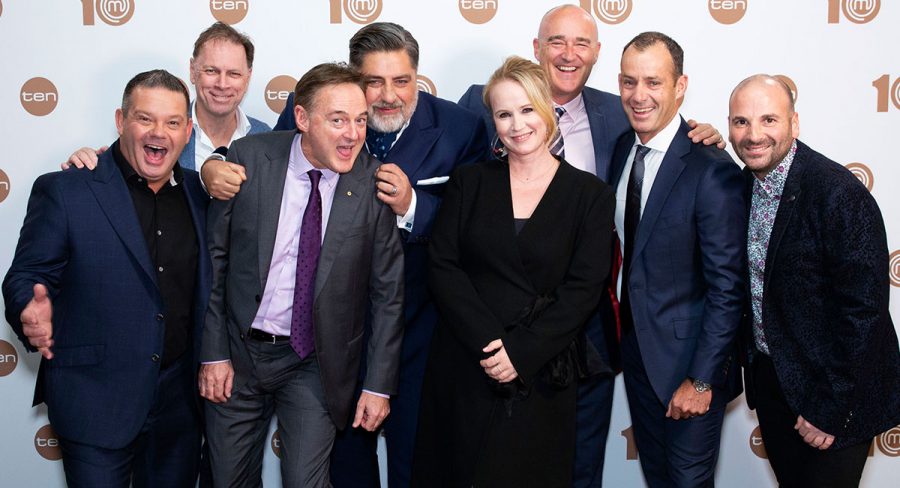 Network Ten CEO Paul Anderson, Endemol Shine CEO Mark Fennessy and MasterChef Australia judges Matt Preston, Gary Mehigan and George Calombaris all spoke at the Melbourne launch of the series last night. It was a busy week for production chief Fennessy, who delivered a special presentation at the Sony Music conference on the NSW Central Coast on Wednesday.

All three judges were hard on the publicity trail this week. Mediaweek will publish our interview with Matt Preston on Monday.

All five were connected with the network and the series when it launched back in 2009 at the first MasterChef kitchen in Sydney.

Like Australia’s other longtime reality hit The Block, MasterChef moved to Melbourne and was able to maintain and build on its initial successful Sydney seasons.

“Tonight we not only celebrate the 2018 launch – a season full of surprises – we also celebrate 10 years of MasterChef, a show that has changed the way we think about food in this country.

“MasterChef Australia is synonymous with our network and has been the cornerstone of our program schedule for the past nine years – a cooking show that no-one really gave a chance at the outset – now in its 10th year having made the kitchen a cool pace to be. “We are most proud of the fact that this show brings families together, bridging generations, race and age, a television show that is feelgood and we think makes a real difference to those who watch it.

“This extraordinary achievement is because of the support and hard work of a lot of very talented people:

“To the team and our friends at Endemol Shine – Carl and Mark Fennessy, Pete Newman and all the incredible EPs who have worked on this show – it’s a behemoth to produce, a 12-month production, and you keep doing it better and better each year.

“To my team at Ten, especially Beverly McGarvey and Rick Maier – you guys were there right from the start and are a major part of something very special.

“To our sponsors, this show is the perfect vehicle to showcase products and produce – a delicate balance in any production – and your support is invaluable. A special mention to Coles, which has been our partner since day one, to John Durkan and the Coles team a very special thank you.

“Last but certainly not least, to Matt, Gary and George. Who would have thought we would be standing here 10 years on, being broadcast in 180 countries and having served up (and presumably tasted) 170,000 eggs, 2.7 tonnes of butter, 3.6 tonnes of sugar, and 5,500 litres of milk? We probably owe you a health check!”