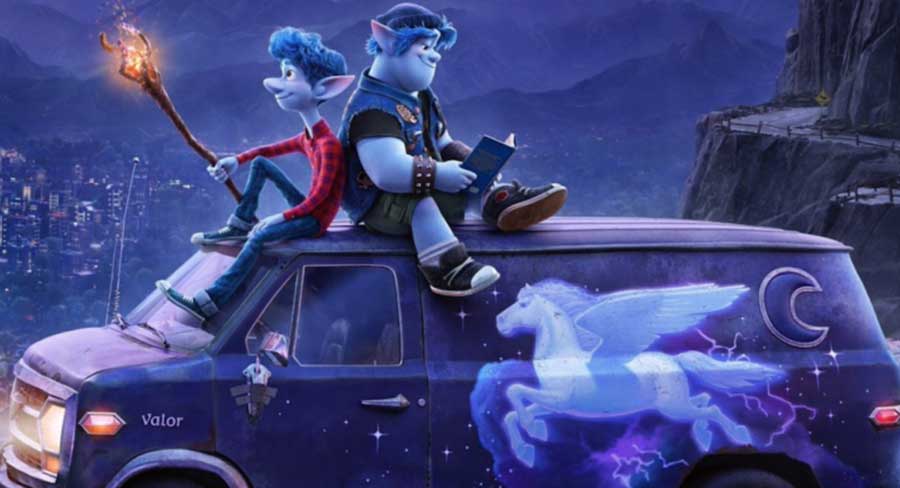 New data from Roy Morgan indicates Disney+ is continuing its stellar growth with over 2 million Australians now viewing the newest subscription television service after only four months. As a comparison it took market leader Netflix six months from launching in Australia in March 2015 to attract over 2 million viewers. 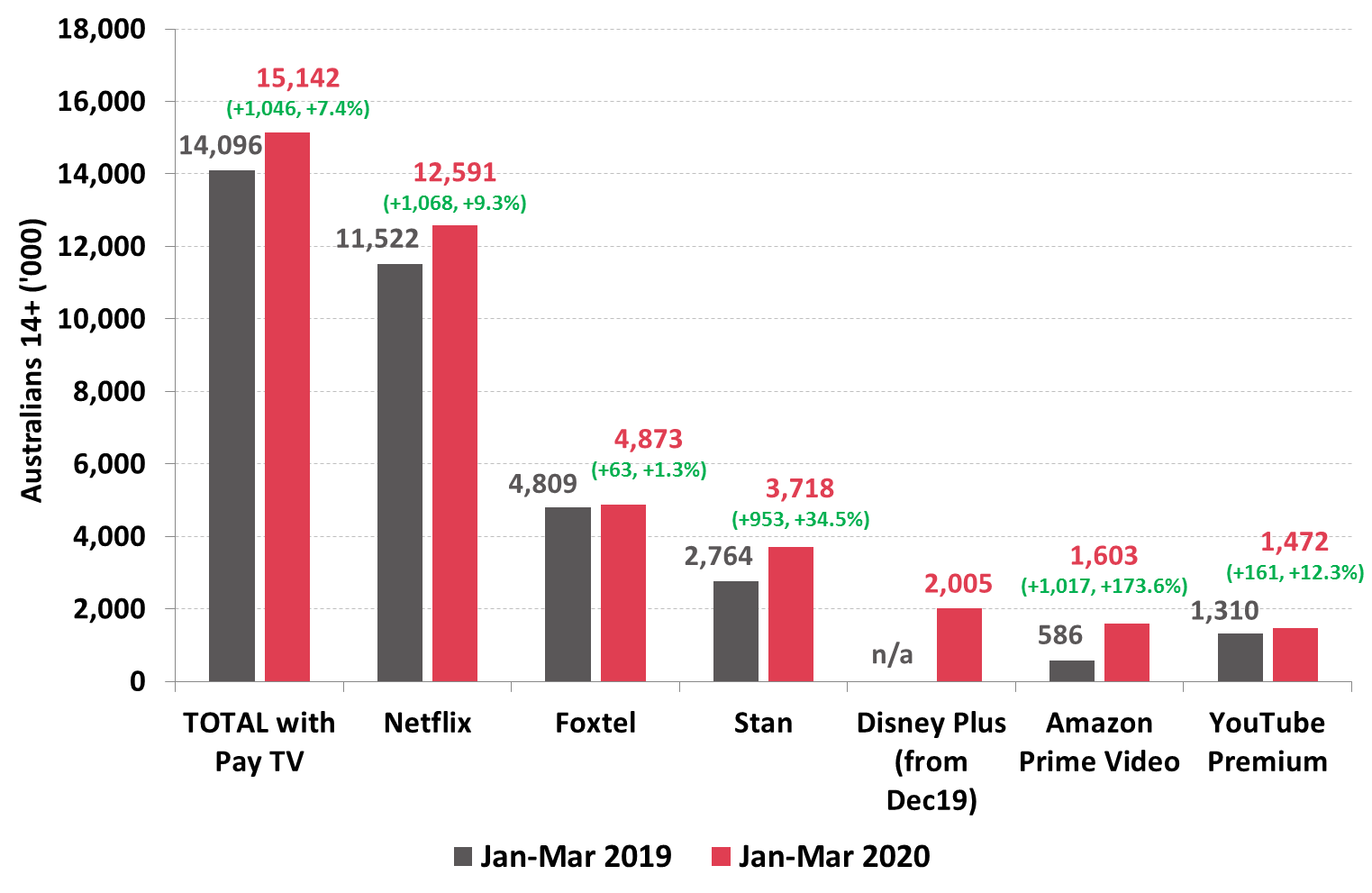 The small increase in viewership for Foxtel is entirely due to the strong performance of their sports-centric streaming service Kayo Sports which attracted 704,000 viewers by March 2020, up by 530,000 on a year ago.

When it comes to multiple subscription television services, Netflix plus Stan is the most popular combination with over 3.4 million Australians having access to both just ahead of Netflix plus Foxtel (3.1 million). 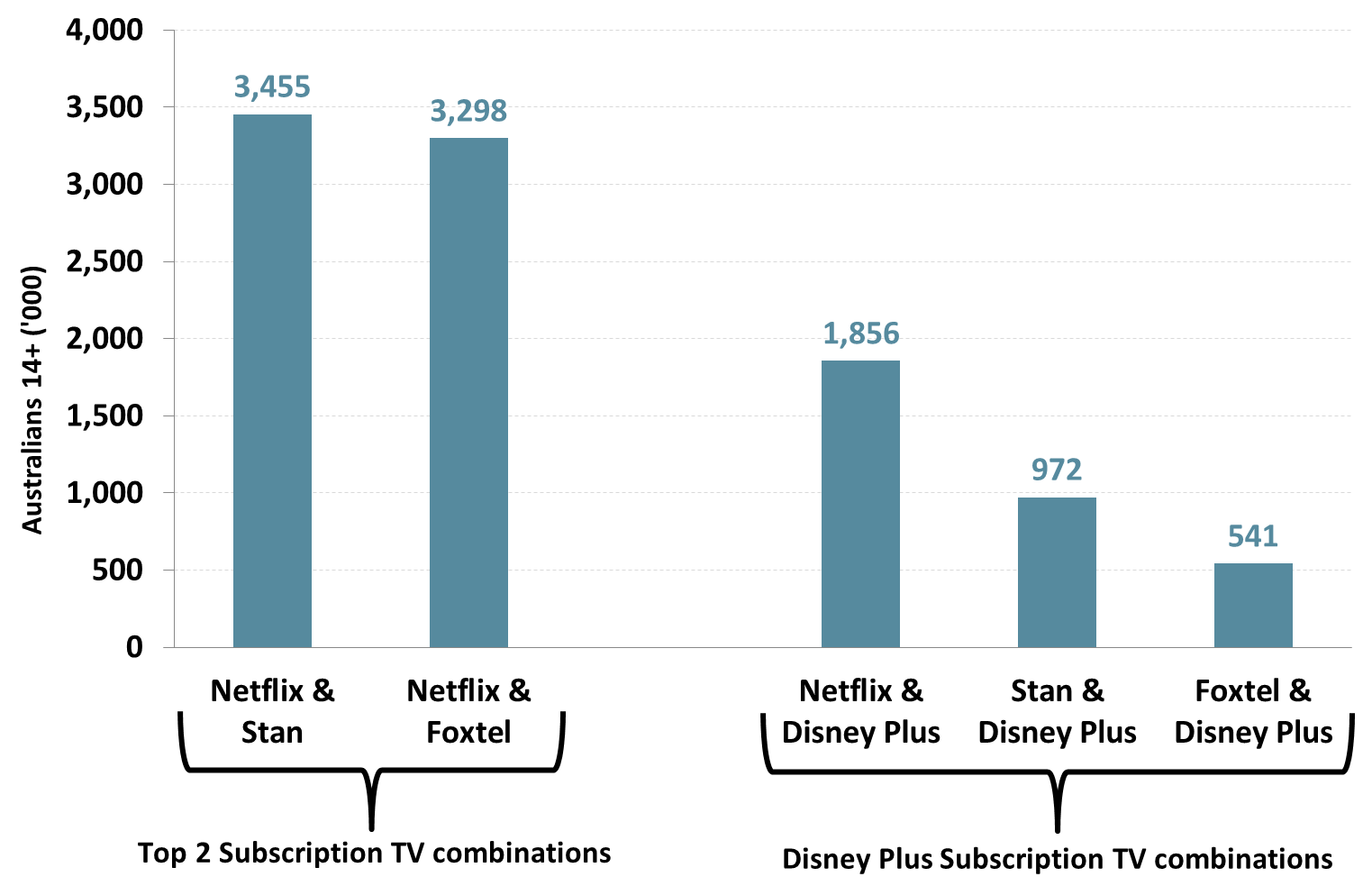 This new data comes from Roy Morgan Single Source, a survey derived from in-depth interviews with over 50,000 Australians each year.

At a time when Foxtel has announced a new service, Roy Morgan CEO Michele Levine says that the explosive growth of Disney+ shows Australians are eager to explore new options in the expanding subscription television market:

“The growth of subscription television services in Australia sped up in March as the nation entered a period of lockdown. In the year to March 2020 an additional 1.05 million Australians gained access to a subscription television service in their household. This is a larger annual increase than we reported a month ago. In the year to February 2020 the annual increase had been 893,000.

“The increasing growth in the overall market has been predicted by many as Australians have been confined to their homes over the last two months and these results are the first to back up that prediction.

“The immediate success of Disney+ provides an example of how new entrants to the market can gain a large share of existing viewers as well as contributing to a growth in the overall market at the same time. Of Disney+’s 2 million viewers a large majority of 1.67 million (83%) are already viewers of Netflix and 897,000 (45%) already watch Stan.

“The latest results show there are millions of Australian households with two, or three, or even more subscription television services. Foxtel’s launch next week of a new cut-price streaming service to go head-to-head against Netflix, Stan and Disney+ does raise the risk of ‘cannibalising’ Foxtel’s existing revenue streams, but also sets Foxtel up take a share of the growing market of consumers increasingly gravitating towards low-cost services that offer extensive and deep catalogues.”