The Covid-driven move of key sports events out of September resulted in an abnormal decline in Australian media agency ad spend in the month, but has also boosted early October advertising demand with bookings already the strongest since Covid began, reports SMI in its latest report looking at September and October ad spend.

The move of the AFL and NRL final series and Grand Finals into October was the main reason for a 19.5% fall in Television ad spend in September, with the Digital media emerging as the best performing for the month with ad spend back just 2.7%.

Digital’s growth is being driven by a continuing increase in ad spend to all forms of social media, with SMI’s Social Media sector data reporting growth of 47.8% in September and 28.9% for the September quarter as companies such as Facebook, Snapchat, Twitter and LinkedIn all delivering large increases in ad spend.

But most importantly, SMI’s early October data shows the shift of the sporting-related ad spend into that month, with TV bookings already up 8.8% , which has in turn ensured early October market bookings being back just 14%. 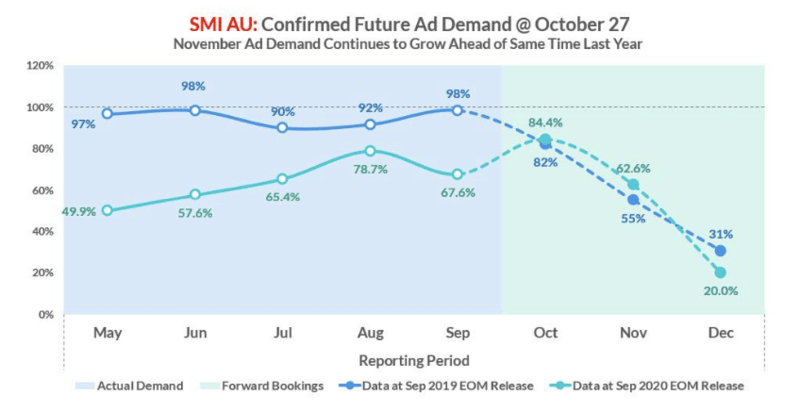 And SMI AU/NZ managing director Jane Ractliffe said the trend was continuing, with confirmed November bookings strengthening by almost three percentage points in the past two weeks to be 7.6 percentage points ahead of the same time last year.

“SMI’s forward booking data shows advertising demand for November returning to pre-Covid levels with more than 60% of the value of last November’s total ad spend already confirmed before the month’s trading has even begun,” she said.

“Television looks set to report another growth month in November given 90% of the value of last November’s total bookings have already been paid for. Across the market we can see other media poised to also do well as key categories such as Food/Produce/Dairy, Technology, Gambling and Household Supplies are already reporting higher year-on-year media investment in November.”

As for the September results, Ractliffe said there were also other significant timing issues affecting the market with the Rugby World Cup broadcast in September last year and an extra Monday last September which especially affects Radio given the increased level of week commencing bookings included in the September 2019 result.

The improvement in the Australian market mirrors that seen in other global advertising markets, with SMI reporting an 22.3% fall in NZ ad demand in September (that market was especially affected by the spike in ad spend for last year’s RWC) but in New Zealand the early October figures show the market only back 11%.

In markets unaffected by movements in sports events there is a clearer improvement in ad spend, with the value of US ad spend back just 2.7% in September (although Digital bookings lifted 8.0%) and Canadian ad spend was back just 5.7% (with TV bookings growing 2.5%).

However, the impact of the Covid pandemic will be seen in the longer term SMI figures, with the September quarter decline hitting 22.4% and the decline in ad spend over the past nine months is now at 23.4%.