SMI has found that Australia’s media Agency market has reported softer advertising demand in January as the delayed Australian Open and the continued impact of COVID 19 briefly interrupted the market’s COVID recovery.

Total media Agency ad spend was back 7.3% in January as the Metropolitan TV market reported a 5.3% fall in bookings due to the delay of the Australian Open broadcast.

This month it was only the Digital media delivering year-on-year growth (+1.8%) as the Social Media, Programmatic and Video Sites sectors all continued to report double digit percentage growth. And that growth has seen Digital emerge as the largest media in national marketer ad spend for the first time.

“Given the likely return to Television growth for the rest of Q1 it will be interesting to see if this trend lasts beyond a single month, but at least for now the lack of the Australian Open combined with continued Digital gains has seen the Digital media emerge as Australia’s largest this month,” Ractliffe said.

SMI is reporting pure Digital bookings – which includes all Digital advertising also bought against the Digital assets of traditional media – grew from 11.1% in January 2011 to 37.6% in January 2021.

“Digital media has forever changed Australia’s advertising landscape and has been on a strong growth trajectory for more than ten years. But it’s worth noting that when Digital revenues sold against traditional media content is excluded from this top-line analysis, Digital’s share of the total falls back to 32.2%,” Ractliffe said.

She also said that the lower overall market demand reported in January after three months of consecutive growth was disappointing, but mostly timing related.

“The delay of the Australian Open broadcast was clearly a one-of factor but had a significant impact, and beyond that the market seemed to be pausing for breath after all the marketing activity in the last quarter of 2020,” she said.

Ractliffe also said the data suggested a more consistent recovery was underway, as the Posters/Billboards market – the largest sector within the most affected COVID media of Outdoor – was already reporting far higher future ad demand than for the same time last year.

“Outdoor was clearly the media most affected by COVID and future bookings fell away quickly from February 2020, but the sheer quantum of the current uplift with the data showing there’s a 26 percentage point differential in future February bookings suggests this key media is on its way to recovery,” she said. 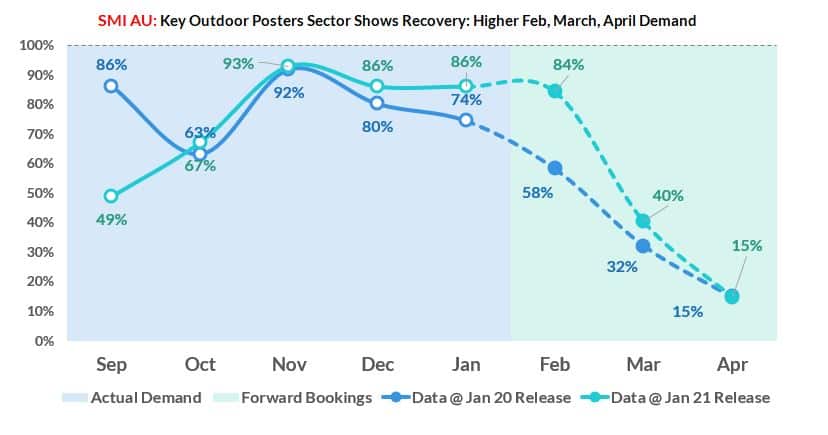 “Prior to COVID, Outdoor ad spend was almost 16% of the market total so its recovery is key to ensuring more consistent advertising growth in the future. And already we can see some strong indications this media is returning with the Retail Outdoor sector reporting another good increase in bookings in January with the total up 21.3% for the month.”

She said other media sectors also continued to do well in January with SMI finding both the National Newspapers and Regional Radio sectors reporting their third consecutive month of growth in January.

For the seven months of the financial year the market is now back 6.8% with Digital continuing to lead the rebound in ad spend with the value ofthat media’s total bookings up 7.9% in this period.

Most sizable product category trends remain mostly COVID-related with Government bookings up 54%, Health Care category ad spend up 170% and the increase in Food/Produce/Dairy ad spend now at 21% over the previous seven month period.