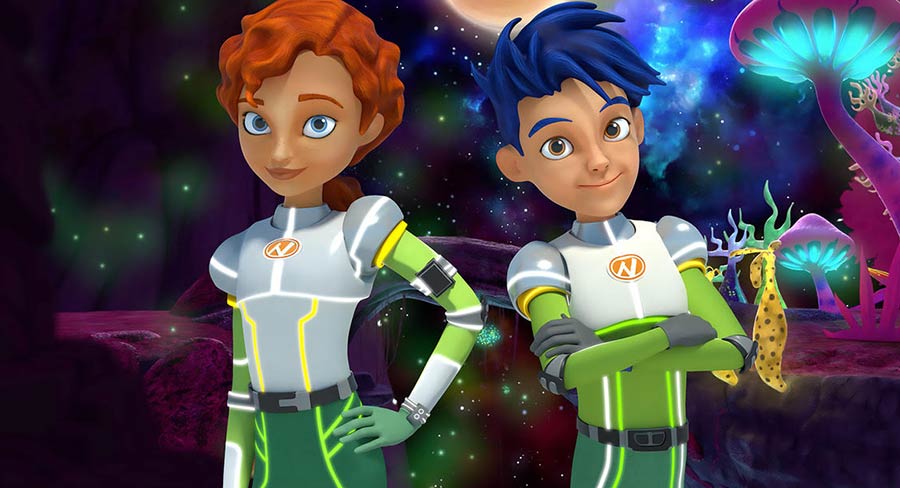 SLR Productions has announced production on the original CGI animated series, Space Nova for Super RTL, ABC ME and Nine Network. The series received major production funding from Screen Australia and is financed with support from Create NSW.

With development funding from Super RTL, ABC ME and the Australian Children’s Television Foundation (ACTF), Space Nova will be co-produced with Giggle Garage in Malaysia.

The series will be distributed worldwide by ZDF Enterprises, excluding Australia and New Zealand, which is being handled by ACTF.

It’s 2162 and life is a blast for space adventurer siblings, Jet and Adelaide Nova. After all, what tween wouldn’t want to divide their days between living on an international space station and accompanying their parents on awesome interstellar missions!

Of course it’s not all asteroid chases and exploding star systems. Jet and Adelaide also have to attend school, do homework (though their chores aren’t always so typical, like recharging the family robot and scrubbing their starships hull!). Still, on weekends this Aussie astronaut family have their own unique way of unwinding, with Jet and Adelaide heading off with parents Hugo and Josie on mind blowing adventures to navigate unexplored planets, surf solar flares, hop between rogue stars and occasionally even discover previously unknown life forms.

“Space Nova is an exciting and captivating space adventure which follows the Nova family’s search for alien life throughout the universe. This is a great collaboration between esteemed partners Super RTL, ABC ME, Nine Network, Giggle Garage, Screen Australia, Create NSW, ZDF Enterprises and Australian Children’s Television Foundation. I am thrilled to launch into space and bring this incredible show to life,” said SLR Productions’ CEO and executive producer Suzanne Ryan.

“The exploration of space is an ancient dream of mankind and offers material for exciting and imaginative stories. We are thrilled by the adventures of the Nova family and happy to be on board together with this fantastic team. We are delighted to continue our long-standing excellent and creative collaboration with SLR Productions,” said Super RTL head of editorial department fiction, Kerstin Viehbach.

“ABC ME is excited to be part of the new sci-fi animated adventure series, SPACE NOVA – a dynamic series full of action, comedy and all things space! We can’t wait to follow this amazing Australian astronaut family on their daring space missions, and discover all the incredible mysteries they unravel along the way. Our audience’s love of adventure and fascination with all things space-related is sure to make this series an unmissable and unique offering for them to enjoy,” said ABC Children’s executive producer, Amanda Isdale.

“Suzanne and the team at SLR Productions have a proven track record of delivering us entertaining and age appropriate content so we can’t wait for Space Nova. Packed with action and comedy, Space Nova promises a space adventure that our kids audience is sure to love,” said Nine Network co-head of drama, Jo Rooney.

Head of content at Screen Australia Sally Caplan said: “There is much to like about the sci-fi astro-world of Space Nova. The characters are inspiring and intelligent, the adventures are fun and educational and have scientific research and exploration at their core. Executive producer Suzanne Ryan and the SLR team, creative director Jo Boag, head of development Melanie Alexander are an experienced team at the top of their game and I look forward to seeing this series that is distinctly Australian and reflective of our multicultural society find an audience here and around the world.”

Juhaidah Joemin, managing director of Giggle Garage and executive producer of the series added that, “It is an exciting moment for Giggle Garage to launch our partnership with SLR Productions on this beautiful property. This is truly a global collaboration involving public and private partners from Australia, Malaysia and Europe; we are thrilled to be the co-producer and having our Kuala Lumpur studio as the main production studio for Space Nova.”

“To launch into space was a childhood dream for me and I am sure that children all over the world will be fascinated by our new series,” said ZDFE.junior VP, Arne Lohmann.

Production credits: Space Nova is a SLR production for Super RTL, ABC ME and the Nine Network. Major production investment from Screen Australia in association with Giggle Garage. Financed with support from Create NSW.