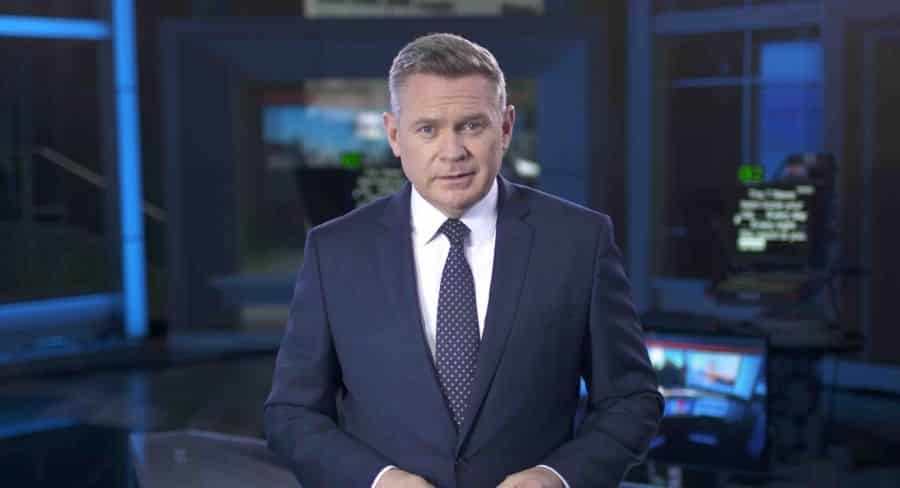 After what has been an unusually poor start to the ratings year, Seven is relying on its news division more than ever to keep it competitive.

In primetime, Seven News at 6pm is the leader for an hour, so much so that it can be enough to get the primary channel and network into first place some evenings when it may not have any other winners.

The broadcaster’s breakfast and daytime offerings from the news division also dominate their timeslots. The latest success from the team headquartered in Sydney’s Martin Place is the soon-to-be one-year-old 7NEWS.com.au.

Craig McPherson, Seven’s director of news and current affairs, looks after Seven’s news investment and he hosted Mediaweek on a recent visit, just days before the recent lockdown on non-staff visits.

Where the sun shines hardest

Sunrise is arguably the strongest link in the Seven news chain and sets the tone for the news brand overall: “We have stability in the program on camera and in the back end with a very strong team,” was McPherson’s assessment, referring to EP Michael Pell and his on and off-air staff. “It’s entertaining and informative with good rhythm.”

On the day Mediaweek visited McPherson, a team of workers were packing away the equipment and security barriers after another Sunrise Plaza concert, this one with The Pussycat Dolls. 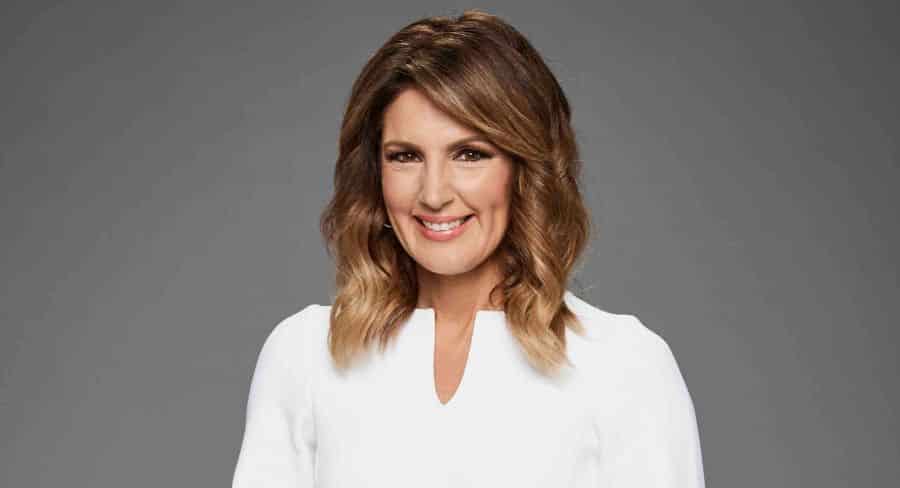 “Music doesn’t do what it once did for us,” admitted McPherson. “But Sunrise does it better than anyone and what is does is break up the format and gets us out of the studio. It’s event TV for our program and keeps Sunrise supporting the music industry in Australia. There are serious logistics required including security with significant costs involved. We are a little more particular about the events we hold now and don’t do them as often as we once did.”

After Kochie and Sam do their thing, they pass the baton to colleagues who keep Seven in first place with The Morning Show.

McPherson: “Hosts Larry and Kylie have made that space pretty much their own for over a good decade. Again, there is a very strong production team behind them. The show has good synergies with Sunrise and there is constant news content throughout, and like Sunrise they are both news productions. Seven news organisations in all states contribute greatly to both shows, with the Sunrise team adding its own character around all that.”

The other daytime contributor to news division performance is a second program from daytime TV EP Sarah Stinson– The Daily Edition. McPherson acknowledged the show, presented by Sally Obermeder and Ryan Phelan carries some news content, but is more entertainment and chat than the other offerings.

News bulletins dotted across the day

The first pure Seven News bulletin is at 5am each day, with the second at 11.30am. At 4pm Seven runs one-hour local news bulletins in each market.

The flagship daily bulletin is at 6pm in each market.

Seven’s most recent news expansion project is The Latest each night hosted by Michael Usher. “The program can go to air from any time from around 10pm to 11.15pm,” explained McPherson. “On Mondays we are trialling a one-hour 10pm edition and we will extend that depending on the results. They do a great job with a tiny team.”

The Latest keeps some reporters on duty until late night to do live crosses updating the biggest stories of the day. “We have had to re-roster and restructure the state-based newsrooms to facilitate the later bulletin.” Those reporters rostered on late start later in the day, contributing to both the 6pm news and then The Latest.“The feedback I am getting is that the reporters seem to like it and it gives them another opportunity to be live.”

Seven News at 6pm is one of the three most critical timeslots in the schedule [7pm and 7.30pm are the others]. The 6pm news has posted strong growth in recent times, extending leads where it dominates and catching up where it doesn’t.

McPherson: “If you look at the figures since 2015, on the east coast we were 180,000 behind in Sydney-Melbourne-Brisbane combined. We finished 2019 19,000 behind – square in Melbourne, close in Sydney and we won in Brisbane. It remains an arm wrestle every night and we have a well-resourced opposition with a lot more tentacles outside of the broadcast area to propagate their messaging and brand. That is a great challenge for us, but the trends are positive.”

McPherson is referring to Nine’s expanded tentacles which now include The SMH, The Age and Nine Radio.

The end of Today Tonight

There were rumours, and hopes from some of the staff, that Seven might re-introduce Today Tonight into all markets. However new management in 2019 scrapped the brand completely. The figures seem to indicate it was a sensible move.

McPherson: “The Adelaide and Perth markets [where Today Tonight went to air after a 30-minute 6pm news bulletin] had the template of what we do on the east coast to work with, so we replicated that in those markets. The hour has been stronger than it has ever been.”

The cost of news

Like all industries, the TV business is constantly looking to find ways to maintain and innovate with either existing or maybe even less funding. “It’s the reality of the world we are in. We are a very cost-effective high margin product. About 70% of our cost base is staff. I put a lot of effort into maintaining, justifying and fighting for what we continue to do. At the moment we are very disciplined and determined to keep core news product as resourced as it can be. It’s not easy, but I am not the only one in that position.” 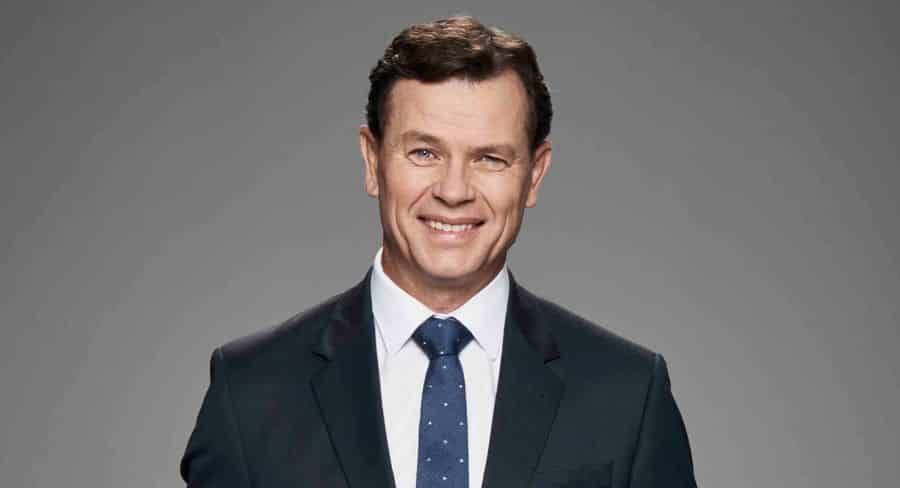 Sharing costs with competitors helps budgets. “We share news choppers around the country. There has always been pooling on certain events and the chief of staffs are in regular contact, maybe that’s a bit more common than it has been. In an informal way we try and not have multiple camera crews waiting outside courts to get the same footage.” McPherson said that communication can depend on relationships between newsrooms.

Know your limits and value

“We are an 11-hour-a-day operation. We could go 24-hours without a great deal of effort.” That’s probably not about to happen though, added McPherson. “People wouldn’t watch a 24-hour channel on FTA [in big numbers].”

He noted that Seven News is the differentiator between the Seven offering and streaming service disruptors entering the market. “We have local market connections around Australia that the newer arrivals aren’t interested in and will never get into. In the years ahead the news product will be even more important than it is right now.” 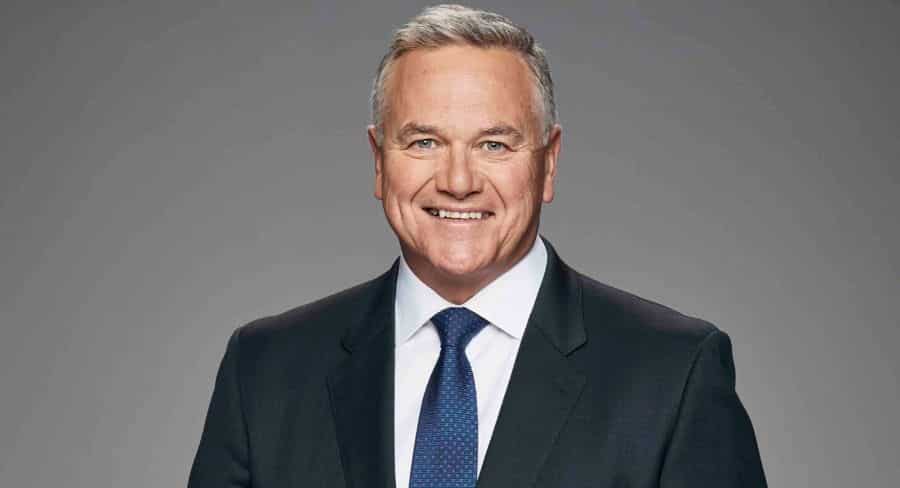 The growth of 7NEWS.com.au

It is just 12 months ago that the news organisation pulled the covers off its own digital news business, launched in the aftermath of the closing of the online news JV with Yahoo! in Australia.

Over the year the audience growth for 7NEWS.com.au has been spectacular. “From zero to 1.2m unique Australians daily,” according to the data McPherson quotes. “When you look at the digital audience scoreboard the sites above us aren’t pure news sites. Those publishers’ figures are wrapped with other sites. When we isolate the pure news numbers for those other publishers, on most days 7NEWS.com.au is ahead of them.”

In the January 2020 news website rankings, the other publishers ahead of Seven were ABC, news.com.au and Nine.

“What we have done is an amazing achievement with a very small team. The bulk of the team are at Martin Place and then we have just essentially one person in each other metro market. There is some contribution from broadcast, but not as much as we need.”

Seven’s policy is to release news from its reporters first online unless it is an exclusive the newsroom thinks it can hold until the 6pm bulletin.

Seven uses digital opportunities available to help grow its audience. Facebook is one of those and subscribers to Seven News on Facebook get alerts across the day when the broadcaster is pushing out live video. “We only do it when required. People won’t watch unless it is something significant. That will become more and more important for us.”

Seven provides a bulletin to Facebook Watch daily which attracts an audience of around 1m+ daily, and according to McPherson “the bulletin is recorded in a digital studio setup in what used to be our boardroom and Michael Usher records it in the afternoon and it goes to Facebook at 3pm. Facebook are using it as a benchmark for their operations in other parts of the world. We do get some revenue back from them for it. Is this a new model? I don’t know. If we can start getting money for content without relying on advertising, it adds a whole new dimension to our model.”

Facebook also has similar arrangements with Nine and Sky News where they also pay for that content.

It has been a milestone week for Seven News on Facebook Watch with 200m views. Last week’s coronavirus special editions have had nearly 2m views each. The Latest for Facebook Watch remains Australia’s number one digital news program. The core demo for the program is people 18-34. The 140 episodes so far have an average audience of 1.3m views with the biggest episode seen by 17.5m views. 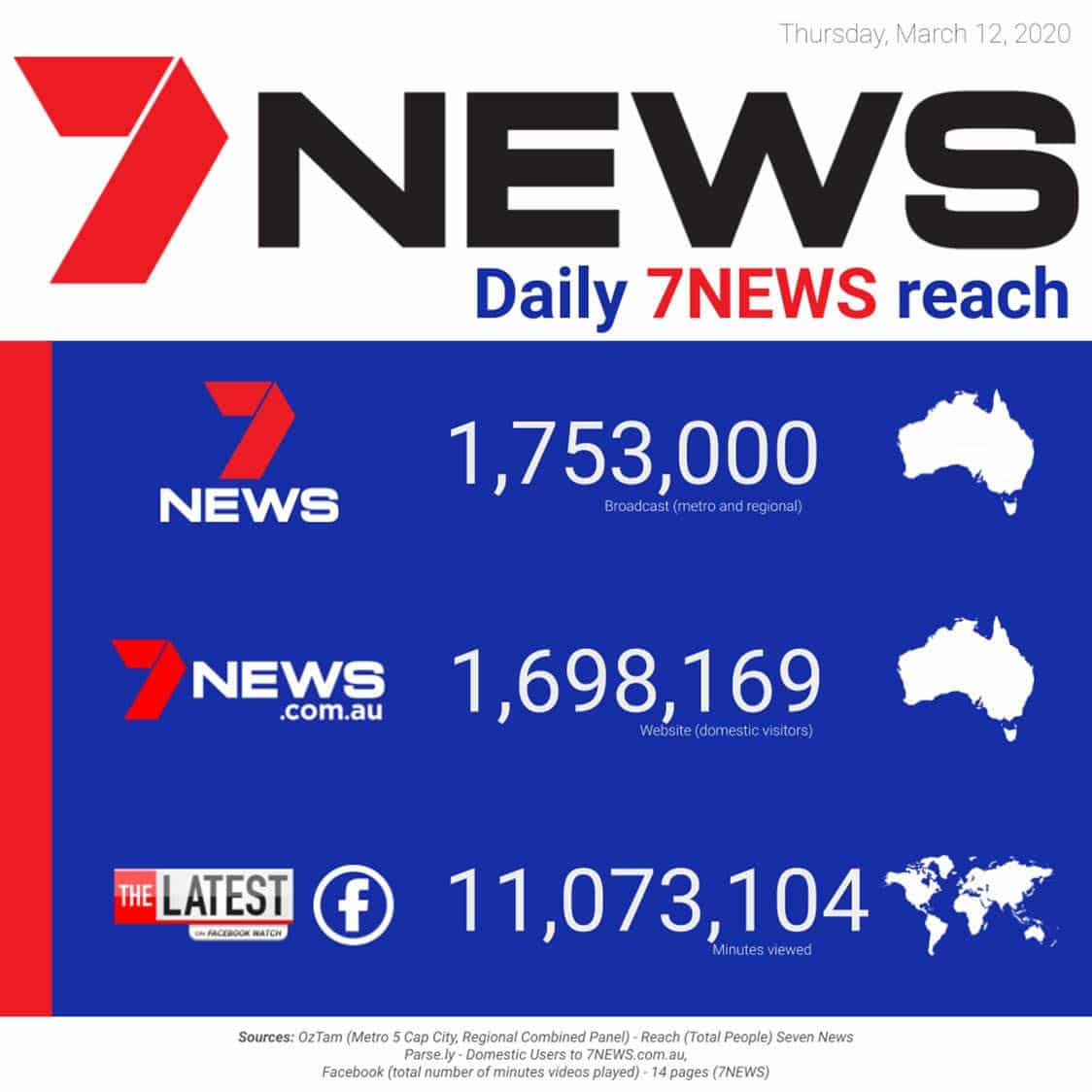 Seven News continues to base two reporters of the United Kingdom – Hugh Whitfeld and Sarah Greenhalgh. Laurel Irving returned recently to Melbourne, strengthening its operation there.

In the US Ashlee Mullany is the bureau chief and Paul Kadak and Amelia Brace are all West Coast-based. Mike Amor returned home some time ago from the US and returned to Melbourne where he hosts weekend 6pm news and 4pm weekday bulletins.

Given the Tokyo Olympics goes ahead, Seven is planning to broadcast Sunrisefrom Japan and also 6pm news crosses. None of the 6pm news anchors will relocate there.