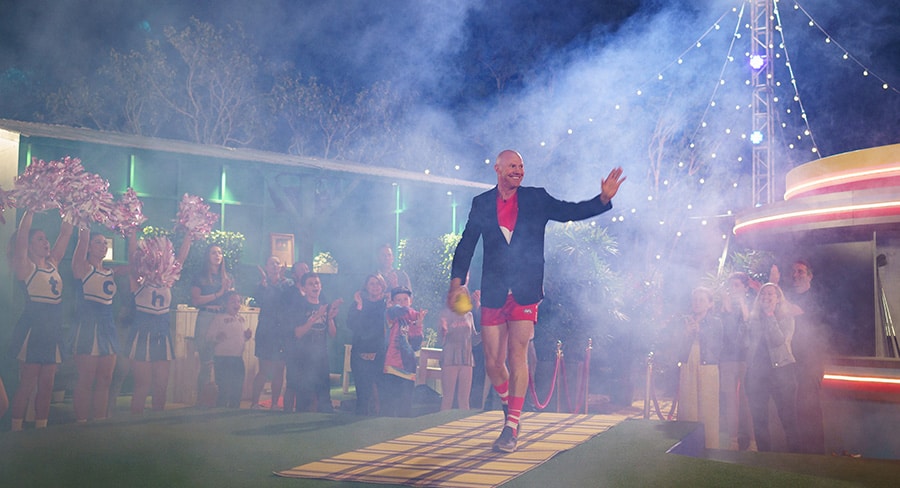 A who’s who of celebrities from Australia’s premier entertainment and sporting worlds will take on the mighty Holey Moley course in extreme mini golf’s night of nights.

Former rugby dual-code international, Rogers, plays to a handicap of six strokes and is a hot tip heading into the competition, but as these celebrities know, in showbiz anything can happen. What they don’t know is that on the Holey Moley course, anything can happen.

These celebs are about to learn the Holey Moley course doesn’t care who you are, if you want to play ball you’ll still have to conquer the towering windmills of Dutch Courage, slay the fire-breathing Dragon’s Breath and brave Putt the Pirate’s shark infested waters.

With his good luck charm – a signed Greg Norman hat – in his pocket, Mark had no problem getting through his early rounds against Jesse Earnshaw on Clowning Around and Teresa Thoi on Polcano, displaying some impressive putting under pressure.

These wins propelled the bearded garbo to Greg Norman’s top-secret and highly anticipated final hole, The Tomb of Nefer-Tee-Tee, where he met pro-golfer, Montana Strauss and drone-pilot, Jayden Lawson.

Mark was dazed by his win. “I cannot believe it!” he told Sonia Kruger before sharing the prize money would be spent on his family, a new car, and some golf clubs.