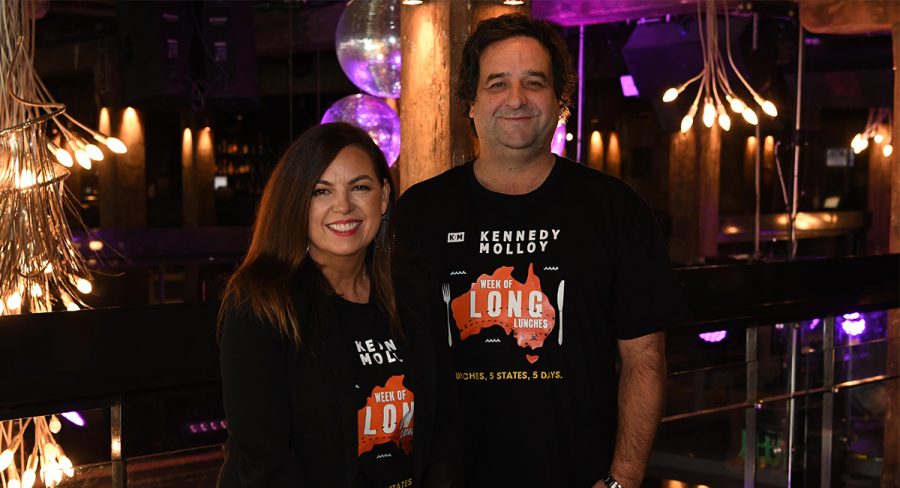 After hitting Melbourne and Brisbane earlier in the week, the tour’s third stop on the national tour was the harbour city.

Triple M’s venue of choice was the Munich Brauhaus in The Rocks. Guests didn’t hold back from sampling the product of the show’s sponsor – Victoria Bitter.

There was royalty in the harbour with the Cunard cruise liner Queen Elizabeth moored nearby at Circular Quay, and Triple M Sydney’s Becko introduced radio royalty when Jane Kennedy and Mick Molloy spoke about their new national drive show.

“We wanted to say ‘hi’, meet you all, and let you know we are open for business,” said Molloy.

“We seriously understand the relationship between what we do and the fact we are allowed to do it because of the support we get from the business community. If anyone wants to sponsor our show you will get more than you bargained for… ”

“In a good way,” interjected Kennedy.

“We are having great fun on air with Victoria Bitter, our first major sponsor,” continued Molloy, noting it was a proper, pure integration. “When we do a piece of content around the brand for four or five minutes, we give the company the biggest cuddle and have fun. We see it as a creative exercise and we look forward to it.”

Kennedy said: “Being at Triple M feels like coming home for me. It is the only FM network I have ever worked for. I am an old rock chick at heart… but not too old.”

Molloy: “Cher’s in town. It could be a close thing between you two!”

Kennedy: “Steady on… this is what I have to put up with every day.”

Molloy said Triple M was the only station they had pitched the new show to. “When we started at Triple M it was a very young brand. As we have gotten older the audience has come along with us.

Molloy said TV was too vanilla these days, with all the biggest entertainers now working in radio. “This is where all the action is.”

While Triple M’s Jamie Angel, Bekko and Sydney PR manager Lucy Rowles were also at the event, there was no sign of the drive show anchor Dangerous Dave.

Kennedy: “He was at the top of the list for us to work with on the show. He’s a great guy, but we really didn’t think it right for him to join us at lunch.”

Travelling around Australia with the hosts are the show’s executive producer Sam Cavanagh (who is never far from the hottest drive shows in Australia), a Triple M digital team and Melbourne-based PR Kelly Black.