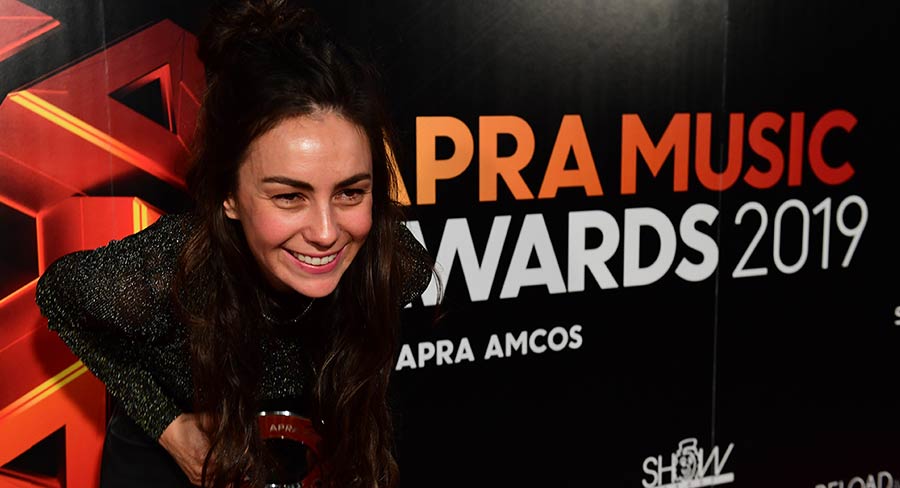 Aarons’ past 12 months have seen her writing songs for or with Camila Cabello, Galantis, Khalid, Dua Lipa, Lykke Li, Demi Lovato, Mabel, Peking Duk and Jessie Ware among others.

Bumping her tally to four awards, Aarons also takes out honours for Rock Work of the Year with alt-rock quintet The Rubens, sharing the award with co-writers and band members Elliott Margin and Sam Margin for their collaboration on Never Ever.

It is third time lucky for songwriter Amy Shark, whose song I Said Hi has been named by APRA members as the Peer-Voted APRA Song of the Year. Including this year, Shark has been nominated in that category for the last three consecutive APRA Music Awards and has now achieved the top honour with her song that reflects the ups and downs of the music industry. I Said Hi is also Pop Work of the Year.

The Breakthrough Songwriter of the Year is Dean Lewis, who has had phenomenal success with his raw, heartfelt songs, including Waves and the global hit Be Alright, both which appear on his debut #1 ARIA album A Place We Knew. In addition, Lewis and Be Alright co-writer Jon Hume are the recipients of one of two Outstanding International Achievement Awards handed out this evening. The Outstanding International Achievement Award is an APRA Board-determined honour which recognises exceptional accomplishments globally. Be Alright, which hit No. 1 in Australia and No.2 in both Sweden and Norway, has had astronomical worldwide streaming figures. The song is winning over American radio charts – reaching the #1 position last month on the Billboard US Adult Top 40 chart.

Also proving that music has no borders is 5 Seconds of Summer, whose song Youngblood is the second to be recognised by APRA in 2019 with an Outstanding International Achievement Award. Writers Luke Hemmings, Calum Hood, Ashton Irwin, Ali Tamposi, Louis Bell and Andrew Watt have written a chart-topping hit that became the group’s first Billboard Hot 100 top 10 single, and propelled the band to becoming the first Australian act to earn three number one albums on the Billboard chart.

The Urban Work of the Year is Clark Griswold (feat. Adrian Eagle) performed and written by DJ Debris (Barry Francis), MC Pressure (Daniel Smith), Suffa (Matthew Lambert) aka Hilltop Hoods and co-written by John Bartlett and Paul Bartlett, while brother and sister songwriting duo Angus and Julia Stone have taken out Blues & Roots Work of the Year with Chateau.

Nashville-via-Newcastle breakout country pop songwriter Morgan Evans has received the Country Work of the Year for his crossover hit Day Drunk. Also making a name for himself in Nashville and beyond is in-demand songwriter Lindsay Rimes who received the 2019 Overseas Recognition Award. Since relocating to the US four years ago, Rimes has built up a reputation as a go-to co-writer and producer, working across pop, rock and country. He’s written for a number of successful country artists, including co-penning Kane Brown’s smash Heaven, which reached No. 1 on Billboard’s Country Airplay chart in May 2018. His songs have also been recorded by country acts including Jay Allen, Kelsea Ballerini, Chase Bryant, The Cadillac Three, Adam Craig, LoCash, Phillip Phillips, Thomas Rhett, Tyler Rich, Dylan Scott, Canaan Smith and Drake White. His work outside of country music includes contributing to South African-Australian singer-songwriter Troye Sivan’s 2014 EP TRXYE, which debuted at No. 5 on the Billboard 200 chart. He additionally co-wrote the title track of fellow Aussie Kylie Minogue’s 2018 album Golden, which debuted at No. 1 in the UK and Australia.

For the second year running, Sia (along with co-writer Greg Kurstin) took out the Most Played Australian Work Overseas for Cheap Thrills.

Lee Kernaghan delivered a tribute to the late, great country music champion Rob Potts, who was posthumously honoured with the Ted Albert Award for Outstanding Services to Australian Music.

The 2019 APRA Music Awards were held in Melbourne for the first time since 2013.

The event was hosted by Melbourne legend Brian Nankervis and featured live performances curated by first- time APRA Music Awards Musical Director Kate Miller-Heidke. The Rubens teamed up with Sarah Aarons for a rare, joint live performance of their Rock Work of the Year winner Never Ever.

See a complete list of the winners and more Awards night photos here.