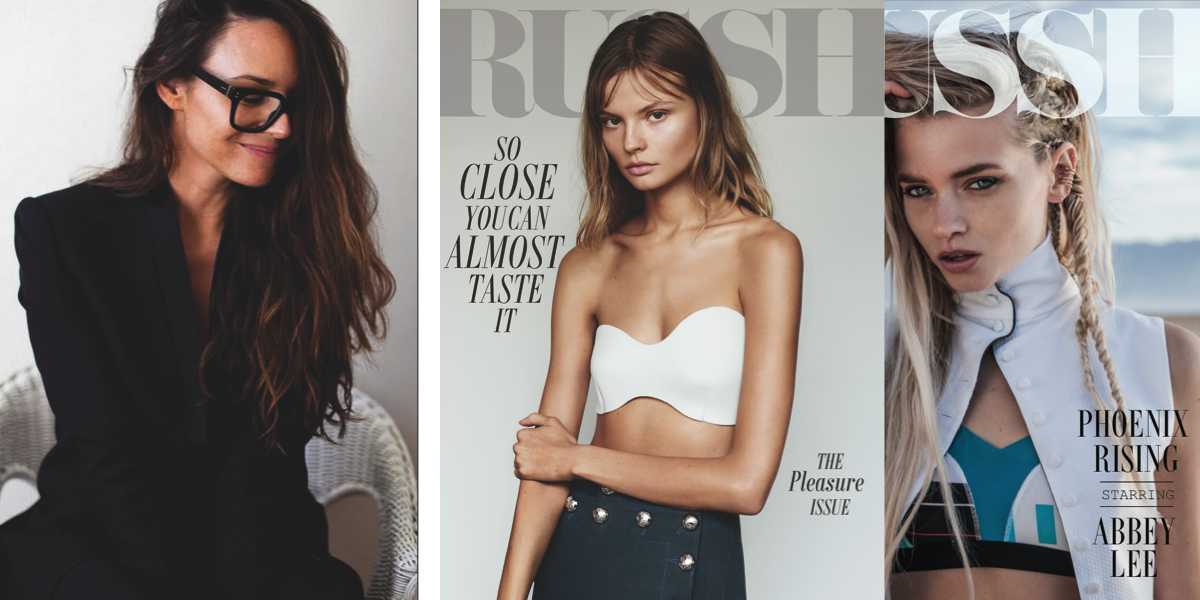 Editor-in-chief of Switzer Media and Publishing’s Russh Jess Blanch has some ambitious plans in place. “We do want to grow Russh into a global brand. We’re Australian at heart, but international in mindset and that’s been our USP for as long as I can remember. It’s about staying true to ourselves as we build the title into a global brand. We feel like we can grow with our international audience doing collabs and partnerships in different areas,” she said.

Speaking to Mediaweek in the publisher’s pristine white offices high above Sydney’s CBD, Blanch said that after the title celebrated 10 years late last year, soul searching about the next phase began. “Getting to that 10-year period was so exciting, it’s an achievement for any business – especially a publishing business in times that have been quite turbulent. The excitement was around hitting that point, and feeling like we’d really nailed the position. The focus is now on how we’re going to grow.”

In the six years since Switzer took on Russh, the title’s readers have grown and evolved with it. “Russh is predominantly a fashion title, but it’s not just about fashion. It’s about arts and music and beauty, and very much sells a sensibility of originality and authentic content. Our demographic has really grown. When I first started with Russh it was very much a 16-35-year old woman, but we’re finding that reader has really matured. We don’t pitch to an age or a demo, but someone who wants to be unique and read high-quality, creative journalism. It’s also someone who is very fashion savvy. We’re a hybrid, between something like a Harper’s Bazaar or a Vogue and an independent magazine, like Oyster. We sit somewhere in between, and it’s worked really well for us,” she said.

Beyond the title’s niche positioning, part of its appeal is the tone. “We say that we appeal to the intelligent woman, and it’s all right to write that down in a press kit, but I feel like a bit of a wanker saying it! I’d like to think that’s what we’re achieving.”

Unlike many Australian mastheads, Russh’s focus takes it beyond our fair shores. “It’s a very global voice. We have an art director in London and fashion editors in London, Paris and New York. We’re very much an Aussie business, but because we distribute throughout the world it’s really served us to have people on the other side of the world. We’re also constantly shooting elsewhere in the world.

“I know it’s a bit of a buzz word, but we really do have people tapping into our website from all different places and it’s like we’re proper world citizens. Even though we’re headquartered here in Sydney, nobody’s role is exclusive to their local market. The feedback that we often get from overseas is that people often don’t realise where we are from. There are some people who think it’s a questionable model to have staff everywhere, but it’s worked for us. We took on an associate publisher in London, Carissa White, and that was a big point for us. She’d come from a background of being with Net-A-Porter, where she was head of fashion advertising. As well as socialising Russh in those markets, she’s been helping us plan the next phase of our digital which we’re just starting to see the rollout of,” continued Blanch.

Russh launched its mobile site in April this year. “It’s very much phase one, but it’s hard to believe that we didn’t have the mobile site for so long. We wanted to create something bespoke for mobile, which is a precursor to the redesign we’ll do on the website.

“With the magazine being bimonthly, we all used to look at websites as the daily touchpoint for the brand. Now, that’s the mobile device. We’re trying to create something more curated on your screen, which is like a weekly curation and goes a lot deeper. The things that are doing really well for us in that space are the shoots that we execute with brands, which are very similar to the main fashion shoots that you see in the mag. As technology becomes more prevalent, you start paring things back a bit and seeing the website not just as a driver of information, but something with a little more thought behind it,” Blanch continued.

The Russh team, all of whom work across digital and print, is looking to make its digital offer less responsive, and up the ante on producing thoughtful, considered content. “We’re not about news, but we do have really great traffic numbers so we need to keep up the volume. It’s about deep content and deep engagement, rather than the numbers per se. Mobile has been great for that. We do about 270,000 unique visitors/month, and we’d like to grow that further. It’s been very steady – we are a publication with a very loyal following so we don’t get a whole bunch of spikes. We are focused on sustainable growth that just ticks along. It’s great. Here in Australia, we’ve got the people that we want. Now it’s just about engaging them for longer and being able to show our aesthetic and amplify content.”

So why did Switzer, which has traditionally worked on more business-focused titles, take on a fashion magazine? Explained Blanch: “Switzer wanted to diversify, and has long worked in custom publishing that went from corporate clients to luxury magazines. We have always specialised in that AB demographic of niche publishing, and that’s Russh – it’s very much niche with a strong following of its specialised content. To be honest, it fits in really well and quite naturally.”

As to the split between print and online ad spend, Blanch didn’t specify but did note the title was enjoying significant growth in ad money. “The ad spend online is growing. We’re probably having about 40% YOY growth. That’s not really the trend, but we did reposition the magazine when we initially took it on. The type of advertisers and the quality of content that we’re getting has really grown and allowed for that. We’re very happy with the support we’re getting from brands. Part of the digital revamp was to create more inventory on the site. The designs that we’re working on are to develop the biggest desktop ad unit in the industry. That’s in response to what both our advertisers and readers want – our advertisers invest so much in these brand images, and to have to cut that back down into a leader board and an MREC seems old fashioned. We’re really building our content around a beautiful, uncluttered environment.”
Each of Russh’s bimonthly editions has a theme, which Blanch said helped to strengthen its content. “Because we’re not about news, we do try to provide some thought leadership through our themes, no matter how whimsical that is.”