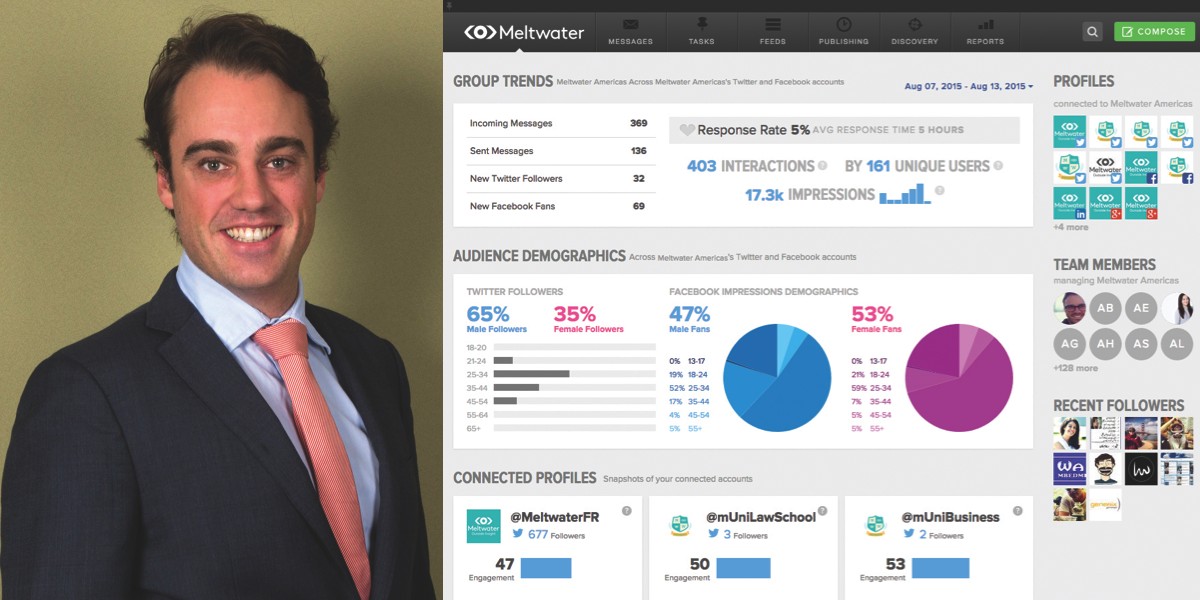 Disruptors are a given in the competitive media industry, and the once-monopolised area of media monitoring is no exception. While iSentia remains the biggest monitoring company in Australia, media intelligence company Meltwater is developing itself a considerable market share. Through encouraging its clients to keep up with the key industry trend – the move towards digital – Meltwater has managed to increase its share of the local market by 45%. Speaking to Mediaweek, Meltwater Australia and New Zealand area director David Hickey explained the company’s unique business model. “Meltwater is a software company that was originally founded in Norway in 2001. We’ve been in Australia since 2007, and our products specialise in monitoring the media. We’ve also expanded to distribution and engagement. Essentially, we monitor all types of media channels. It encompasses everything that’s been written about your brand, your industry and your competitors in the online space, and provides you with lots of really deep analytics that help you to understand trends, understand sentiment and really get a clear snapshot of everything that’s going on, both on and offline.”

A range of brands in Australia use the service, which Hickey said ranges in price from $10,000 to upwards of $100,000. “We work with 24,000 companies globally. Here in Australia, they range from Avocados Australia to Adidas. The range is because the service is very scalable. A big part of how Meltwater has grown since our inception is because we came into a market that was traditionally dominated by large print-clipping companies. Their model was based around pay-per-clip, which is obviously a very expensive way to monitor the media because each article costs around $4 when the publication itself is $1.50. With Meltwater, you buy the licence to the software and the information that you track is free. It’s more of an all-you-can-eat model. It makes it a lot more scalable for bigger companies and accessible to smaller players.”

Although Meltwater competes fiercely with iSentia, Hickey noted that the Meltwater offer goes beyond traditional media monitoring. “They are certainly the dominant name in the print-clipping market. Traditionally, in every market that we’ve got into, we’ve had to compete pretty hard with them and they’ve certainly done very well in going out and buying all of the other players. Meltwater does offer services that can replicate or replace iSentia, but we certainly do a lot more beyond their traditional offer.”

He maintains that competition is good for the market. “When iSentia was the dominant local player, it was clear that there was a need for a company to step up and offer a really serious choice. It’s never good to have a market with only one player operating across all media types. We’ve got a number of partnerships in place that help us to monitor behind paywalls and expand our content and coverage base, which ensures there is competition out there. Most importantly, clients have the ability to choose the provider that makes the most sense to them.”

Meltwater’s point of difference, he contended, is its impressive digital play. “We started as an online web-clipping company, and since 2001 the window of opportunity for online software companies has just exploded. The social media revolution has really benefited us. We use what we see on social to help companies inform their digital and social strategy.

“We have more of an online focus than a print focus, and that’s definitely the trend that we’re seeing with advertisers. They are increasingly pushing their spend online, so we’re seeing that online is having a much bigger impact on an advertiser’s business than traditional media.”

As to Meltwater’s future, Hickey said the company would be significantly expanding its data play. “That’s largely where Meltwater is heading, and in the next five years we expect to be much more focused around data analytics and adding content from different avenues to give our clients a much broader understanding of the data that will impact their brand and their message and their company. Layering data science over the top of what we already do will produce more unique insights, and while we started in media monitoring, now we’re looking at the big data and analytics space. It provides an easier way of bringing in different content types to enable data coverage to grow really quickly, but it also integrates a couple of different companies to interpret the data. As we add more and more data, it’s likely that we’ll be able to provide more and more value.”

Announced this week, Meltwater is partnering with Sprout Social to power Sprout’s social engagement platform, ensuring the right message for the right person at the right time. Of the partnership, Hickey told Mediaweek: “We’ve decided to work with them because we really feel that they are the best in class. They’ve won lots of awards for technology and customer satisfaction. The partnership was originally born of a global search that we had for the right kind of partner, based on the demands of our clients around a broader selection of channels. Sprout has opened up engagement with LinkedIn and Instagram and Google Plus as well as Facebook and Twitter, which we were already offering to our clients here. We feel like there’s a big trend in social beyond just listening, towards identifying and using your existing platform to create content that users are more likely to engage with. Then it’s a case of engaging with them and turning them into advocates for the brand to push your message.”

David Hickey, who has been with the company for eight years, led Meltwater’s Hong Kong team before returning to Australia for the role of Australia and New Zealand area director.