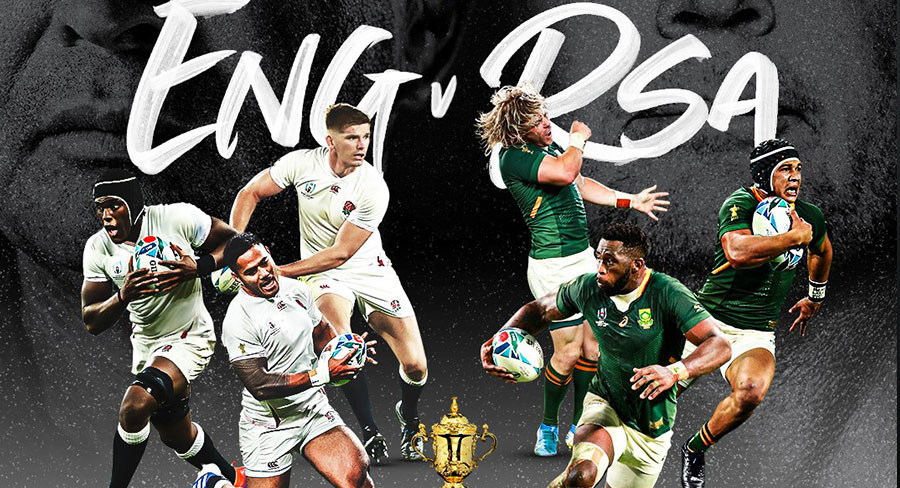 The Rugby World Cup Final featuring England vs South Africa is live and ad-break free in HD and 4K Ultra HD this Saturday from 7.00pm on Foxtel and will also be shown on free to air through Channel 10.

England is the favorites to win, being coached Australia’s Eddie Jones, who guided them to a famous semi-final victory over the All Blacks last week, while South Africa scraped past Wales, thanks largely to the boot of star flyhalf Handré Pollard and prowess of halfback Faf de Clerk.

Fox Sports will cover every angle of the final with an hour of pre and post-match insight and analysis from former Wallabies Justin Harrison and Stephen Hoiles, alongside hosts Kieran Gilbert, Nick McArdle, and former England International turned world rugby journalist Stuart Barnes.

England: “England’s greatest challenge is getting out of their own way in order to not beat themselves.  They have all of the attributes of previous Rugby World Cup winners: uncompromising defence, inventive attack, a multi-faceted kicking game, brilliant goal kickers, strong scrum and line out, try scoring backs – with all of those elements their greatest enemy is within.”

“Warren Gatland’s warning of the ardour of semi-finals in previous Rugby World Cup’s remains the single biggest threat to England. Eddie ‘the boss’ Jones smacked it down beautifully in the press conference during the week, however I am certain he knows the truism in the warning. After having left every ounce on the pitch last week against the All Blacks, do England have the buoyance to stay afloat and dip once more into the well and defeat a deliberate, if somewhat limited, Springboks?

“England will be prepared as well as any team has been prepared to play a final. If they can get back to last week’s intensity, they win comfortably. However, I am not certain that they can. History is a great teacher, and I have seen teams dip deep late in tournaments and find themselves with nothing to draw on the following week. England found a bigger hole than any other last week and came out the other side, but at some cost. England are not spent but the result will be closer than many think.

South Africa: “The draw provided the opportunity for South Africa to progress through to the final – well played. They have big match capability with a game plan built around forward dominance, a backline prepared to kick more than any other team in the competition, and yet some may wonder whether they truly deserve a place in the final.

“However, Rugby World Cups are competitions of attrition, high energy attacking rugby is great to watch, great to play, great to commentate on, but does not always win in the grind of a Rugby World Cup. The Springboks took the pragmatic approach, identified the attributes and skills they had at their disposal, and have played to them faultlessly.

The question that they will be answered on Saturday – ‘Is that enough to be the best team in the world and win the RWC?’ If the answer is ‘yes,’ then all power to coach Rassie Erasmus and his team, however I suspect they will find out they needed a little more against the world’s best, who will not gift the Springboks points and opportunities as others have.”