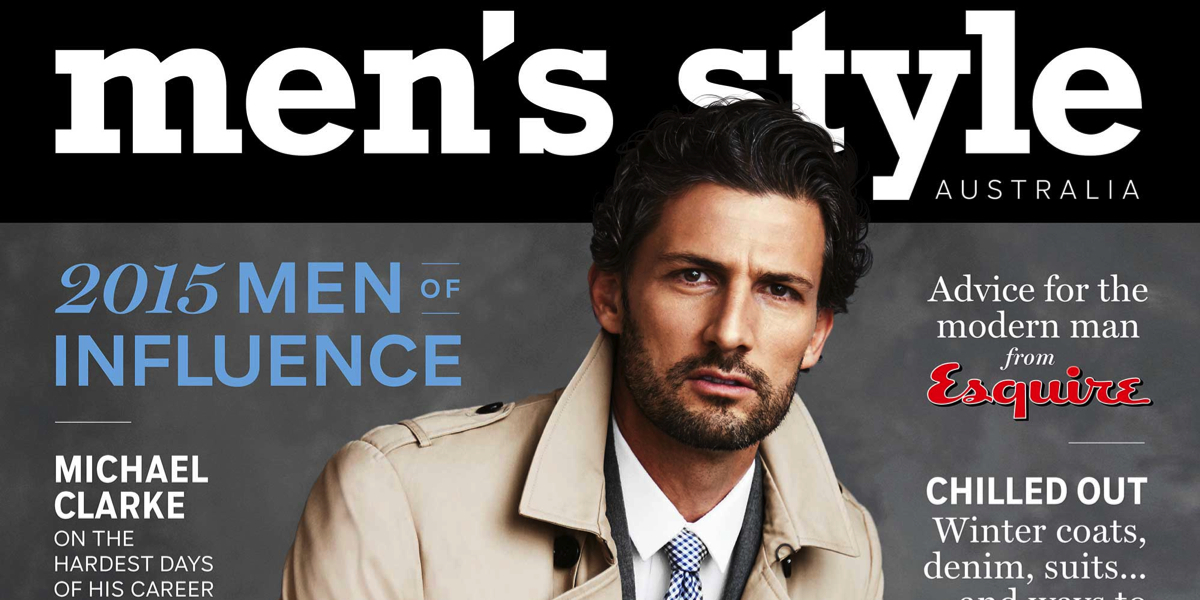 Title: Men’s Style
Issue: Winter 2015
Publisher: Bauer
Total Pages: 164
Cover Price: $11.95
Ad Pages: 35, including four house ads for men’s style and other Bauer titles
Coverlines that work: Michael Clarke on the hardest days of his career; Beat Ageing – the man who says we can live to 150; The Bachelor’s plan to renovate your life
Editor-in-chief: Michael Pickering

Despite being a magazine for men – and not in the FHM sense, this is the very first issue of the men’s lifestyle title to be covered by a man. The Tim Robards-covered issue marks a change in the magazine’s direction, perhaps in response to the 20.83% drop in readership it suffered this survey compared to last year’s figures.

Fear not, fans of beautiful women – there are plenty in the aptly titled Schmoozing section, which features snaps from Hublot, Audi and Nespresso functions. Hublot get another plug in a two-page spread on Australian cricket captain Michael Clarke, who has just signed on as the watch brand’s ambassador. Swedish actress Alicia Vikander gets two pages too, while English model David Gandy and F1 World Champion Lewis Hamilton get a page each. Sydney’s Gang of Youths, who have made a splash on the ARIA charts, are profiled in a page looking at up and coming Aussie acts including Montaigne and Jarryd James. Matthew Hall’s look at where to wine and dine in New York is definitely worth a read for anyone en route for the city that never sleeps, while James Cooney’s look at Tough Mudder and the man who founded it is an interesting perspective on the extreme approach to exercise. Dr Bill Andrews’ quest to cure dying and ageing only gets a page, a shame considering how big the topic is. “Get The Look”, a six-page fashion shoot, features clothing as diverse as a cowboy hat and a paisley business shirt.

Eight pages are given to a black and white Esquire Manual, which examines everything from how to navigate a formal event to what Ernest Shackleton would wear if he was around today. Watches, both traditional and smart, also get nine pages.

The 2015 Men’s Style Men of Influence get 20 pages, eight of which go to Robards in a discussion about “quality girls”, social media and the need for people to live healthier lives. Home and Away’s Stephen Peacocke, SBS’ Luke Nguyen, Vance Joy, MasterChef’s Shannon Bennett, The Block’s Darren Palmer, I’m A Celebrity’s Joel Creasey and X Factor contestant Cosetino are all media people who also make the cut.
Matthew Hall’s visit to the FBI to look at its hunt for cyber criminals makes for great reading, as does Alex Proud’s look at tattoo culture (with the interesting conclusion that we will reach peak tattoo in 2025). Tatts are also featured in Blue Period, a 12-page denim-oriented fashion spread with a model whose hands, neck and face have all been inked.

Digital: @mensstylemag has 4,901 followers on Twitter and 10,400 on Instagram. The title doesn’t have a Facebook page and digital copies can’t be bought on the iTunes store.