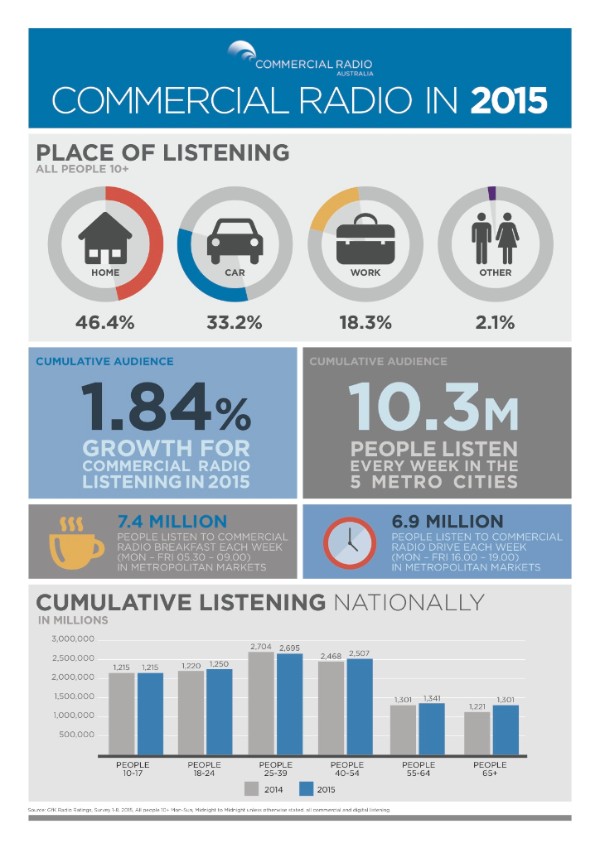 The commercial radio listening summary, released this week by industry body Commercial Radio Australia, shows audiences increased by 1.8% last year and are up by 6.2% over the past two years.

Chief executive officer of CRA, Joan Warner, said radio was continuing to appeal to all age groups, and its ability to reach a mass audience had underpinned the positive advertising revenue trend last year.

“2015 was a very good year for commercial radio, with listener numbers rising to record levels and a healthy increase in audiences for both the critical breakfast and drive time shifts,” she said.

“Radio is also continuing to stay relevant to younger audiences, with 30,000 more listeners in the 18-24 age group turning in, which points to a positive outlook for the future.”

The annual listening data is based on an average of the eight GfK radio ratings surveys conducted in the five capital city markets in 2015, compared with the previous year.

Home was again the main place of listening, accounting for just over 46% of all commercial radio listening, followed by in the car (33%), at work (18%) and elsewhere (2%).

“People are listening to radio via multiple platforms, but traditional broadcast radio is still the preeminent means of consuming radio and is deeply embedded in people’s lives throughout their day,” she said.