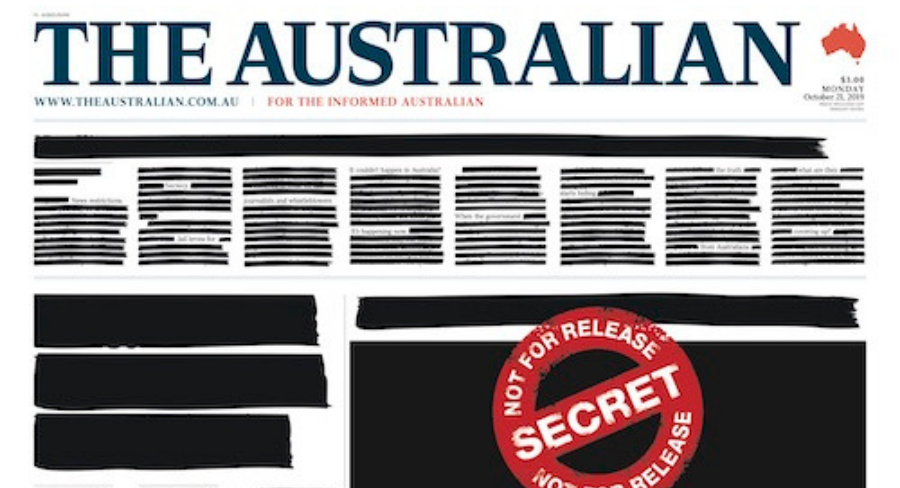 • Gerard McManus is now a media adviser in the Morrison government

The Department of Defence has kept a series of reports into the culture within the Australian Army under wraps, claiming that their release would jeopardise any possible improvements and have the potential to fuel a social media backlash, report The Australian’s Sean Parnell and Matthew Denholm.

The latest example of government secrecy can be revealed as Scott Morrison’s Coalition came under strong criticism from former Liberal leaders over press freedom, with Jeff Kennett warning that the separation of powers had been “totally blurred” and John Hewson urging “serious” reforms to halt “abuse of power”.

The government’s refusal to provide access to information is one of the motivating factors behind­ a letter media organisations sent on Tuesday to all 227 federal MPs, sounding the alarm on a growing culture of government secrecy. The letter — signed on behalf of 19 media organisations by News Corp Australia’s corporate affairs director Campbell Reid— said that laws needed to “strike the right balance” and too many passed in recent years were at odds with “an open and transparent society”.

Freedom of Information reviews are taking more than a year, some without even being allocated to a case officer, because the federal government has not given the oversight agency enough funding, reports The Australian’s Sean Parnell.

The incoming Coalition government tried to abolish the Office of the Australian Information Commissioner but was unsuccessful. It has since allowed its three separate commissioner functions to be done by one person, most recently Angelene Falk.

In a Senate estimates committee hearing on Tuesday, Falk said there had been an 80 per cent increase in applications for review of FOI decisions over the past four years.

The OAIC budget allows for 19 case officers, however Falk said she had asked government for funding to hire another nine plus capital costs.

Senator Rex Patrick’s leak on submarines may have saved lives

Centre Alliance senator Rex Patrick says blowing the whistle on the leak of the French company that is designing Australia’s $50bn submarine fleet has made the nation safer, reports The Australian’s Greg Brown.

The South Australian senator, who is pushing for a referendum to include the right to press freedom in the Constitution, said the balance between national security and the public’s right to know was out of kilter.

In 2016, Senator Patrick, then a staffer for former senator Nick Xenophon, released to The Australian’s Cameron Stewart a leak on the combat capability of the six Scorpene-class submarines that French shipbuilder Naval Group designed for the Indian navy.

Senator Patrick has called for constitutional change to enshrine press freedom and an overhaul of Freedom of Information laws.

Kevin Rudd’s plane had taken an unusual detour on the return journey from the 2008 APEC meeting in Chile, going via Hawaii rather than Auckland, reports Nine News political editor Chris Uhlmann in The Sydney Morning Herald.

Detours on domestic and international journeys were not that uncommon for the peripatetic Kevin747, so few in the travelling media pack thought much of it.

No one had any reason to sweat the refuelling stopover of a few hours, except, of course, for the convicted criminal in our midst.

As we disembarked, and handed over our passports and paperwork, the criminal was spotted and singled out by US officials. For his crimes he was taken and held apart from the rest of the pack for the duration of the stay and escorted back to the plane when it departed.

The criminal was the Melbourne Herald Sun’s political reporter Gerard McManus. A little over a year earlier he had pleaded guilty to five counts of contempt in the Victorian County Court. His colleague Michael Harvey pleaded guilty on four counts.

Gerard McManus is now a media adviser in the Morrison government so there is hope that all criminals may one day be redeemed. There was some change after his conviction with the introduction of shield laws to provide greater protection to journalists and their sources. It was a small pause in a steady retreat.

Corruption inquiries have hit a record high at the nation’s law enforcement agencies in a telling sign of misconduct at the same time federal politicians face a united media campaign against government secrecy, reports The Sydney Morning Herald’s David Crowe.

The federal integrity commissioner has disclosed the “highest ever” number of ongoing corruption issues being investigated, with the workload growing by 20 per cent to have 278 investigations under way at the end of June.

Morrison has dismissed the need for stronger whistleblower protections in the past and has countered the media industry campaign this week, saying “no one in this country is above the law,” but Labor is challenging him to admit the need for reforms to curb secrecy.

The UK-based Australian barrister has backed a campaign, supported by all of Australia’s major media companies including News Corp – the publisher of this masthead – to reform laws in Australia to protect the public’s right to know.

Robertson said more needed to be done to get Australia’s law up to speed with those of the United Kingdom.

“Australia is behind other advanced nations in its failure to protect the media from police harassment. In Britain, for example, they may only obtain a warrant to search journalists’ offices and homes with the Director of Public Prosecution’s approval, by making an application to a judge, which the media can oppose,” he said.