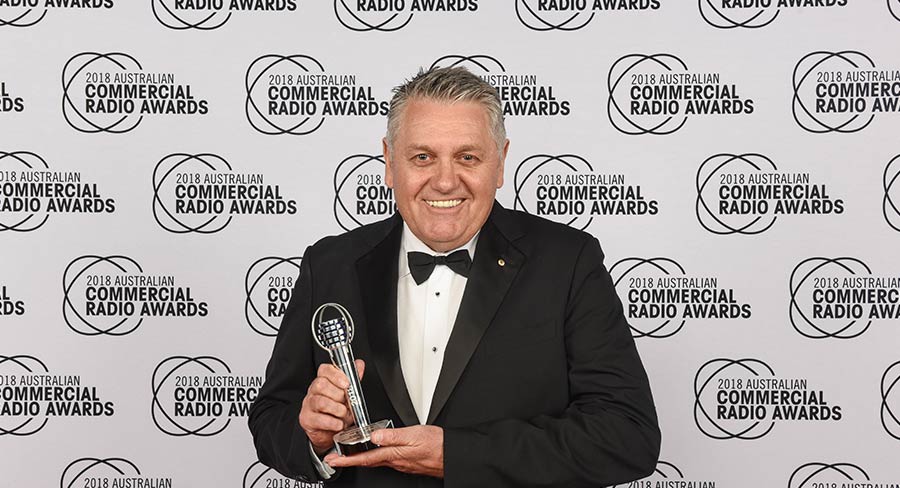 “I have to confront those challenges and they are still a concern.”

The best on-air team for an AM station went to 2GB’s weekend warriors The Continuous Call Team. Accepting the award was the man who launched the show, 2GB’s Ray Hadley.

Hadley noted the show has been going for 31 years.

During his acknowledgements, Hadley mentioned the hard work by the women newsreaders in the 2GB newsroom, singling out ACRA winner Erin Maher and colleague Amie Meehan, who was earlier this year diagnosed with breast cancer. Hadley said she didn’t take much time off work during her treatment and had just recently been given the all clear.

He also paid tribute to Erin Molan, who joined the Continuous Call Team last year as the first female member, winning the ACRA for Best Newcomer in 2017. “She remains a very important part of the team,” Hadley told Mediaweek.

The multi-ACRA winning announcer said he’s faced a number of challenges this year away from the microphone. “I have to confront those challenges and they are still a concern.”

One of those challenges was helping his policeman son after he was arrested on drug charges earlier this year.

“My son is in recovery and hopefully he’ll make a full recovery, which could be a long time off. It has been tough. The fact that he was plastered all over the front of the newspaper, for a story that would normally be well inside, was difficult for him because he was my son. He is going okay. He is under treatment and he will continue that treatment for a fair while.”

Hadley was also at odds with Macquarie Media management after they accepted advertising from Clive Palmer for his reborn political party that filled much of the airtime on Hadley’s show.

“It’s not a matter of Clive Palmer advertising on the network. It’s a matter of him taking an ad in every break. He did it for a deliberate reason – to try to aggravate me – and he succeeded. It’s not good radio – it doesn’t work for him, for us or our listeners.”

Hadley said he was still enjoying the work. “The day I stop enjoying it is the day I give it up.”

With the weekend’s Wentworth by-election result, Hadley said there will be plenty of content. “It was fairly predictable. It will be a very testing period between now and the next federal election.”