• Get this – ARIA’s host and music legend plays for an hour then shouts the bar!

Guy Sebastian took to the Nova Red Room stage on the weekend for a Red Room performance ahead of his four nominations and hosting of the ARIA Awards this week.

The second show of Nova’s ARIA Week of Red Rooms was held at The Factory Theatre in Marrickville. Hosts on the night were Nova’s 96.9 weekend breakfast show Matt De Groot, Sarah McGilvray and Matty J (pictured onstage with Guy). The theatre was packed with an invited 400 fans who got the special treatment from the music icon as he performed for over an hour.

As always when Guy Sebastian takes to the stage, he created an incredible atmosphere and had his audience captivated. After taking the stage he said: “I get to try and make your life better and help you forget your worries for an hour or so, how crazy is that; that’s an honour.” 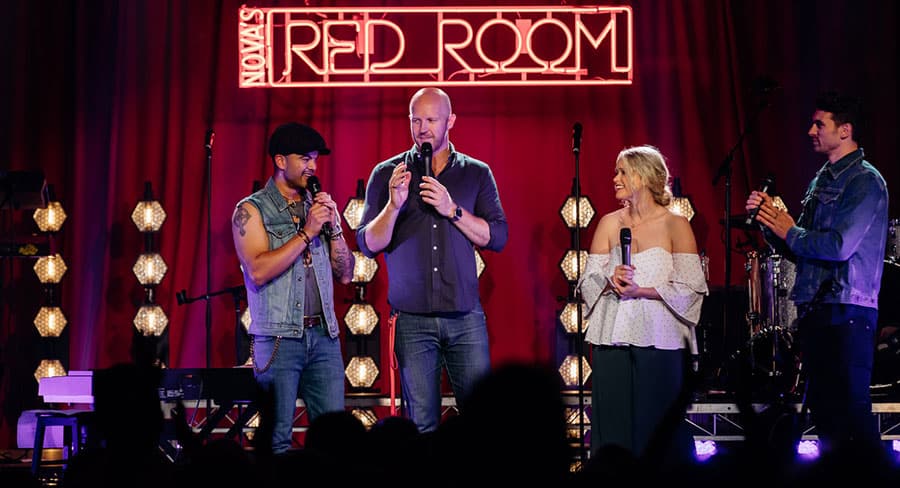 Sebastian and his eight-piece band played a selection of hits including Like a Drum, Like It Like That, Bloodstone, Battle Scars, Get Along, Who’s That Girl, Woah and one of his biggest ever hits, the recent single Choir. He also treated the fans to an acapella performance, as well as a cover of the Neon Treeshit single, Animal, which had the crowd moving and singing along.

In celebration of his new song Let Me Drink (and in a Red Room first) Sebastian surprised the crowd with an impromptu bar tab, splashing $2,000 over the bar on fans.