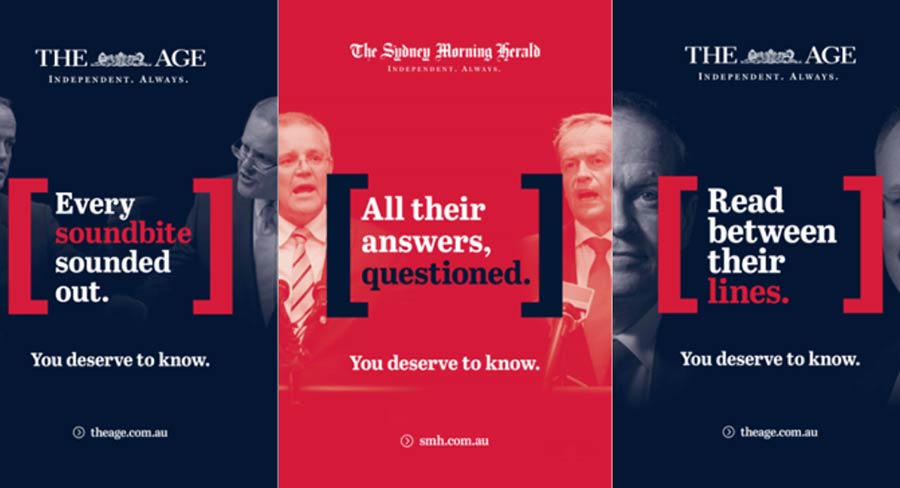 The Sydney Morning Herald and The Age have announced an election version of their brand and subscriber marketing campaign, “You Deserve to Know”, as their editorial teams gear up for the Federal Election on May 18:

Initially launched in February, “You Deserve to Know” builds on the “Independent Always” ethos of the Herald and The Age by highlighting cases of public interest journalism where they have led the national conversation.

This next stage of the campaign highlights the role both papers have played in helping the public make sense of the policies, spin and sound bites before casting their vote on May 18.

“The Sydney Morning Herald and The Age have a long history in excellent election coverage and our newsrooms are focused on delivering the news our readers want,” said Chris Janz, Nine’s managing director of publishing. Using the same design as the first phase of the campaign, the election-themed campaign uses imagery to make its political thrust clear with photos of Prime Minister Scott Morrison and Opposition Leader Bill Shorten.

The campaign was created by Dentsu-Aegis’ With Collective in partnership with The Sydney Morning Herald and The Age’s subscription team. Digital agency Slik executed the campaign on digital and social channels.

Over five weeks, the campaign – designed to emphasise the strength and authority of the Herald and The Age’s election coverage – will run across print, digital display, outdoor and social media.

“Our editorial teams will cover the important news of the campaign to keep our readers informed, but we are very aware that subscribers expect more than ‘he said, she said’ reporting. Our approach will have a focus on policy and context in a way that enables you to cut through the noise and make up your own mind about key issues,” said James Chessell, group executive editor of The Sydney Morning Herald and The Age.

“We have a large team of reporters on the road talking to voters and candidates as well as coverage coming directly out of Parliament House.”

Tory Maguire, national editor of The Sydney Morning Herald and The Age, said the team has already kicked into election mode.