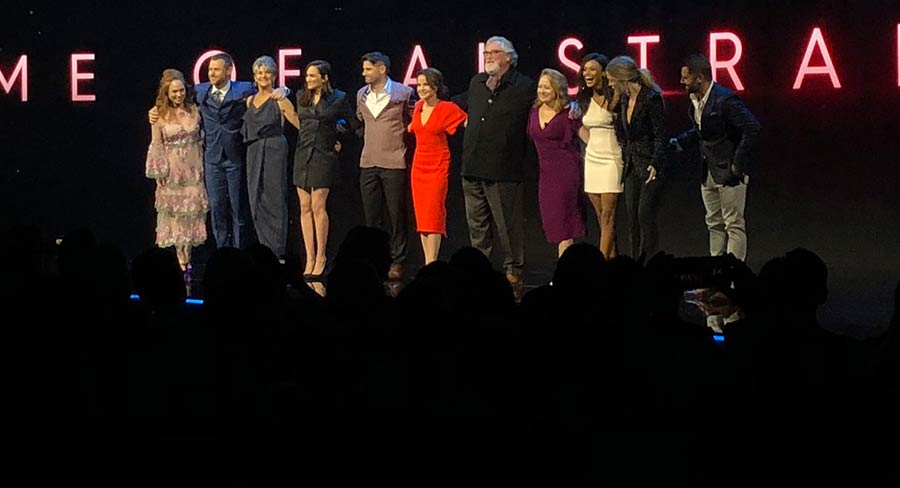 A Nine roadshow will travel around all metro capitals to present, starting with Melbourne next week.

A Nine roadshow will then travel around all metro capitals to present, starting with Melbourne next week. “This is getting awkward,” says the CEO.

Then it’s a MAFS dinner party with more Nine stars including Pete Stefanovic and Sylvia Jeffreys. During a dinner speech Karl commiserates with Gold Logie nominees who didn’t win – like Nine’s Tracy and Rodger.

“I can’t believe Grant Denyer won the Gold Logie,” said Grimshaw in the bathroom. Eddie McGuire looks on disapprovingly. When they leave, Georgie asks Karl and Pete if they want to share an Uber.

4.44pm: Hugh Marks onstage
“It has been an outstanding year of audience performance on all platforms,” the CEO tells the big crowd.

“Content is bigger and more expensive than ever before.

“We are again the preferred destination for viewers 25-54 and 18-49, both for the primary channel and network.

“When it comes to launching new shows, our record far surpasses our opposition. You can rely on us.

“My aspiration for Nine has always been to ensure it leads the Australian market as a modern and contemporary content business, built on the foundations of great people, great content. “The combined Nine-Fairfax group will provide a scale and unparalleled breadth of platforms across television, radio, digital and print media.

Delivering content that will be recognised for its diversity, quality and recognition that indeed one media company can serve a number of audiences.

“Meaning we can build more powerful content partnerships, coordinated across all platforms.

“On the slide behind me you can see the depth and diversity of brands that you will be able to access through the merged business. It’s a powerful content mix that [for marketers] will deliver you results.”

Marks said Nine will be spending nearly $1b annually on content.

“More content than ever before – what you are seeing is more than television shows. They are content franchises that engage with Australian audiences on all platforms.”

Young started with Married At First Sight – this year off the back of the Australian Open tennis. She then noted The Voice season eight will follow with Young claiming The Voice is the only shiny floor show in Australia.

Nine is commenting the move of Australian Ninja Warrior to Melbourne will guarantee audience growth. Nine is also guaranteeing a winner in 2019 – the person who goes furthest and fastest will win $100,000. If the competitor actually manages to scale Mount Midoriyama, the prize will jackpot to $300,000.

Love Island was a test if the younger audience wanted content on other platforms. Nine is going harder this year – moving the series from 9Go! to the primary channel. Family Food Fight will be back for season 3 in 2019. There have been changes to the format for season 2, including families of just two people. The radio and TV star announces he will be hosting the only new major franchise for 2019 – Lego Masters. “When Michael Healy asked me if I love Lego I said yes,” explained Blake.

“It is not about me, but Lego teams from all around Australia.”

Nine has secured the Brickman, aka Ryan McNaught, the only accredited Lego builder in the southern hemisphere, to be part of the series.

Young returned to stage and explained that MAFS attracts 2.4m people when you count the audience on all platforms.

Marketing executives from J&J, Youfoodz, Volkswagen and KFC talking about why they invested in Nine franchises like Love Island, Australian Ninja Warrior and Nine’s rugby league. “The Block needed Volkswagen, the Volkswagen needed The Block.”

Young talking about Nine’s big ideas. “9Powered works with big ideas that will drive the industry forward. Nine has the best big ideas for brands.

“Powered Hack puts clients in the room with content creators.”

A reel followed asking advertisers to consider drama opportunities. “Drama connects with audiences like no other.”

Rodger Corser says “We are back. We are working on storylines for season four right now and you can bet things will go pear-shaped for Dr Hugh Knight.

“We are Australia’s most successful drama – trust me I’m a TV doctor.”

Reel then previews Bad Mothers. “One sisterhood you don’t want to cross.”

Stars of Bad Mothers on stage – Mandy McElhinney, Shalom Brune-Franklin, Daniel MacPherson and Melissa George. “We are currently in our second week of shooting. I am thrilled to be working with these three actors who have returned to Australia to take up their roles.”

Nine shows clips from the first week of shooting.

Then the big news about the return of SeaChange with the original writers and creators. Sigrid Thornton and John Howard on stage. Then the rest of the cast join them onstage briefly. Highlights of the commentary team: John McEnroe on video – “Let me start with [stands up] You. Cannot. Be. Serious.”

“We take you closer to the action than anyone else.”

Voiceover reminds the guests: The opportunities for brands to engage with major sports have never been better.

Courier flew in this morning. “I never miss an upfront. The first one I’ve been asked to, but I never miss one.”

Long dwell on the Australian Open indicates how critical it is to Nine’s 2019 offering.

Notes that 9Now has over 7m sign-ups – audience members Nine now has a one-to-one relationship with.

“We are one of the only broadcasters globally who can understand who is watching our content on the big screen.”

The power of television and the precision of digital can work together. Scrolling banners with Star Wars theme as they explain the attractions and success of the investment tool.

Interviews with media buyers telling what 9Galaxy offers them.

“I can’t believe it was only 12 months ago on this stage we launched 9Galaxy,” said Michael Stephenson, Nine’s chief sales officer.

The commercial leader, who says he is obsessed with effectiveness and efficiency, said 9Galaxy as a ratings predictive tool has been very accurate. Out of all the campaigns it has been used to buy, it has not been required to issue a single make-good. • By the end of 2019, all Nine content will be available to buyers on one platform.
• By the middle of 2019 the 7m signed-in customers will be integrated in 9Galaxy.
• By the end of 2020 Nine will release Galaxy 4.0. It will be a world -first selling content to audiences on all platforms.
• 9Voyager initiative offers SMEs the ability to buy a dynamic schedule from a web login using their credit card. It’s the first self-service platform for TV advertising.

5.57pm: Close to the end with a 10-minute reel of highlights wrapping the show

Hamish and Andy come on stage.

“We have noticed some of you looking at your phones. So we are going to re-run that and ask you to really concentrate. [Nervous laughs as some think they might have to watch it again.]

The duo then ask the audience to follow them, and a marching band, to another soundstage for the after-party.