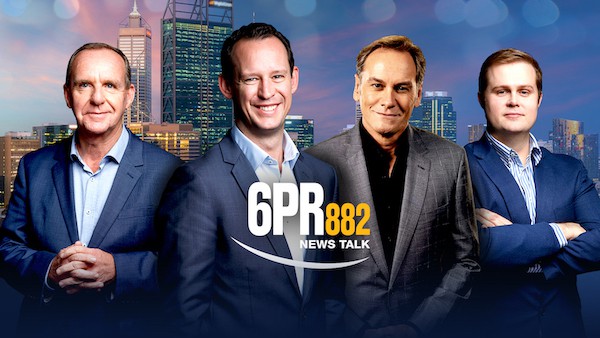 News Talk 6PR 882 has unveiled a new and refreshed 2021 on-air line-up for the leading Perth talk station, announcing that mornings host Gareth Parker will move to the key breakfast shift. He will be taking over breakfast from Steve Mills and Basil Zempilas. After successfully running a campaign to be elected Perth’s next Lord Mayor, Zempilas indicated earlier this year he would be leaving 6PR to focus on his new civic duties and his role at Seven.

Among the changes at 6PR is more Nine on-air talent joining the station.

60 Minutes journalist Liam Bartlett will re-join 6PR as its new mornings host, while Steve Mills gets to sleep in, moving from breakfast to afternoons.

“We’re very excited about 6PR’s new on-air line-up. Gareth Parker is perfectly placed to lead our talk radio format through the next decade with his great style of broadcasting and journalism he has honed in the mornings slot,” said Emily White, 6PR content manager. “His ability to break stories, analyse events and set the news agenda will be the driving force of a reshaped 6PR.

“We are similarly delighted that Liam Bartlett is making his return to daily radio as the new host of mornings, a slot he has dominated previously, and we’re very happy that Millsy has found a new home on afternoons. Together with Oly in drive and Beauy supercharging our weekends, it makes for a formidable line-up seven days a week and delivers on our promise of the best live and local, news, sport, weather, traffic, information and entertainment.”

Parker joined 6PR four years ago after more than a decade at The West Australian newspaper where he covered WA politics.

Bartlett re-joins 6PR from Nine’s 60 Minutes. Based in Perth, Bartlett has a long history in the state across Nine, the ABC, and as a columnist and feature writer for News Ltd/The West Australian. He will continue to file a number of stories for 60 Minutes each year.

“I couldn’t be more excited. It’s a huge privilege and big responsibility to wake up with our wonderful 6PR listeners and help get the day underway,” said Gareth Parker. “We want to set the agenda with the big interviews and the most relevant breaking news, but it’s also about that essential traffic and weather info that helps people navigate the morning, the latest in sport and entertainment while having those great talkback conversations and plenty of fun along the way.”

“The opportunity to rejoin the 6PR team and represent our Perth audience was just too good to pass up,” said Liam Bartlett. “To advocate on behalf of so many great listeners and help keep our decision-makers honest is what makes the ‘Morning Program’ so special and the reason I’m so thrilled to be returning”.