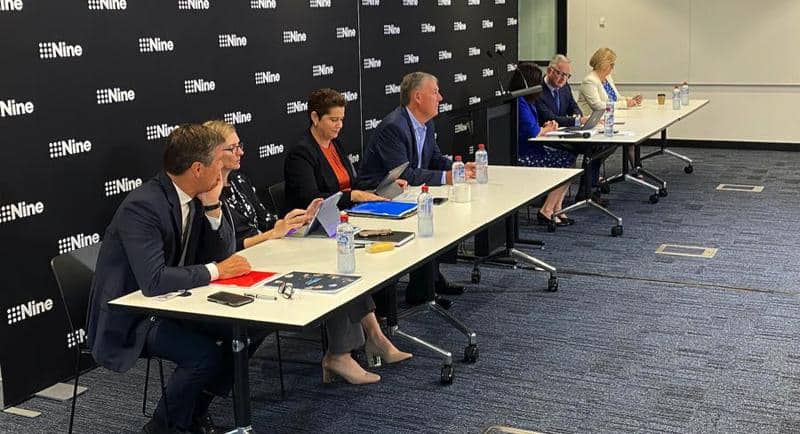 Nine Entertainment Co CEO Hugh Marks explained at the AGM how 2020 had impacted the group in different ways.

“On the screen, you will see the performance of the various parts of our business and the obvious benefits of our portfolio of assets,” said Marks. “What you will see is that some businesses have thrived through the Covid period, particularly our subscription-based businesses, whilst others were negatively impacted by the short-term weakness in the ad market.

“In the three months since we last updated you on trading conditions, the underlying ad market has markedly improved since our August update.

“At the August result, we commented that we expected Q1 FTA revenue to be down around 15%, an estimate which proved broadly correct.

“However, since the end of September, the FTA advertising market and Nine’s share of that market, have both improved significantly, and with the added benefit of major event timing (State of Origin and NRL Finals), Nine’s December quarter is now expected to show growth in Metro FTA advertising revenue of around 15%.

“After a stronger start to calendar 2020, the challenges relating to Covid-19 heavily impacted on the property market and Domain through the fourth quarter. Notwithstanding an overall listing market that was down in the double-digits, Domain benefitted from its newly introduced pricing model, increased depth penetration and ongoing cost focus.

“First half FTA costs will be down in the double digits. We do expect second half FTA costs to increase on last year’s as a result of the return of the NRL, which was absent through the second half of FY20, as well as some reinvestment in content to support the continued recovery of advertising markets. Overall, we are expecting full year Free To Air costs to be down around 4% on FY20, prior to any revenue-related costs.”

“We are certainly trading more positively than we would have anticipated just three months ago and are very pleased with the operating performance and trends in each of our business units. Despite this, given our limited visibility on the second half advertising market, we do not believe we are in a position to provide guidance on earnings for the full year. We expect to be in a better position to address this at our half year results in February.

“What we have now should not be under-estimated. Our television business spans both free – through the Nine Network and broadcast video on demand through 9Now; and subscription through Stan. Not only does this mean that we have multiple routes to video audiences, but it also enables us to think differently about the content we pursue. We can now focus on making content decisions for the benefit of all of our television platforms, and optimising the value of that audience to the most desirable platform. A significant shift in how we assess our content investments. This enables Nine to benefit from both continued growth in television consumption as well as the shifts in viewer behaviour.”

How Stan and Nine will combine on sport

“Our recent foray into Rugby Union is perhaps the best example of the latter. Through its relationship with Nine, Rugby Union has secured television coverage for all of its matches – providing Rugby Australia with important Free To Air coverage of a range of its key games and increasing the profile of Rugby Union in Australia. Of course, as the broadcaster, Nine will also support the game through the news and other content, using the strength of all of our assets to promote the sport.

“This is effectively a ‘service’ that only Free To Air can provide. For Nine, it means we can address a valuable and passionate sports audience through Stan’s entry into the sports subscription market, providing us unique optionality as the content market continues to evolve over the next decade, an option we could not have pursued a couple of years ago. We expect Stan Sport to be a valuable addition to our broader television business as we continue to evolve into the future.”

“The other arm of our business is Publishing, primarily our Metro Media business, which is becoming increasingly digital and is not far from the tipping point where digital will outweigh print. Already reader-based revenue, which is pretty much everything ex advertising, accounts for 60% of the total and is eminently more defensible, and stable.

“We have made much progress already, but there is more to do. Firstly, we aim to reduce the cost base of our legacy Broadcast and Publishing assets by around $230m, ensuring they are fit for purpose. We now have a detailed blue-print to reach this target by 2024. Already, we have initiatives in place that will deliver around 80% of this cost out target.

“Secondly, through growth in our digital assets, we aim to source at least 60% of our Group EBITDA from digital sources – Stan, 9Now, as well as the digital components of Domain and Publishing. With the recovery in Free to Air markets occurring more quickly and steeply than we previously expected, it is possible this will retrace somewhat in the current year from the near 50% we reported in FY20. However, this longer term goal remains intact.

“Thirdly, we expect more than 35% of Group revenues will come from subscription – Stan, and parts of Domain and Publishing, thereby reducing our exposure to advertising markets.

“And finally, we are targeting around 30% of Group revenues from VOD. So that’s SVOD through Stan, already a $1.5b market, and BVOD through 9Now, which at this stage is a relatively small subset of the broader $1.2b digital video market.”