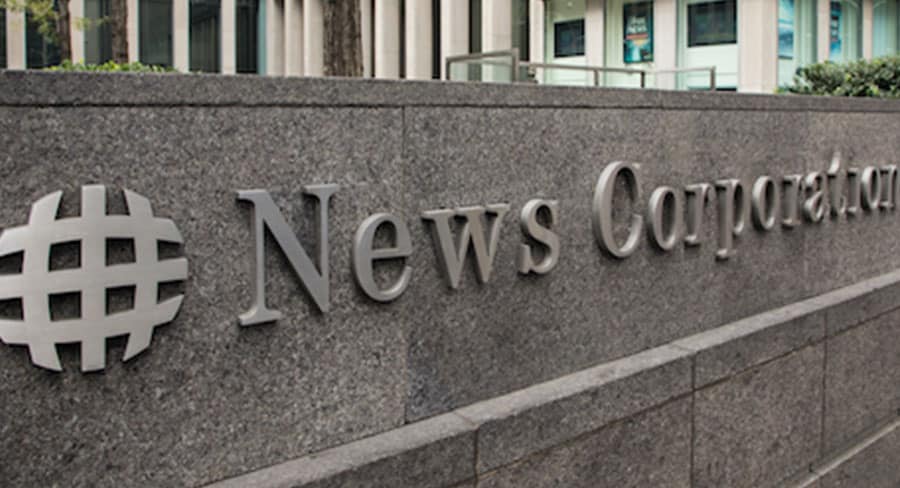 News Corporation has provided details of its results for Q3 January to March 2020.

• Revenues were US$2.27 billion, an 8% decline compared to $2.46 billion in the prior year
• Dow Jones saw 20% growth in digital-only subscribers to over 2.5 million, including 15% growth in digital-only subscribers at The Wall Street Journal, while experiencing record traffic across its digital networks
• No details of streaming drama service apart from launching soon
• News Corp says sports rights costs heading for major “reset”

Commenting on the results, chief executive Robert Thomson spoke on a conference call this morning:

“We are operating in a different, difficult time. Every business and family is facing challenges and our thoughts, in particular, are for those who are suffering deeply and personally from the impact of COVID-19.

“Our fiscal third quarter results demonstrate the strength of News Corp and the power of our premium content. We also maintained a robust balance sheet, with $1.4 billion in cash and cash equivalents as of March 31st and an untapped $750 million corporate revolving credit facility, providing a strong foundation for the company’s future.

“Despite the onset of COVID-19, and particularly volatile, adverse currency movements, profitability was relatively stable. Notably, profitability was higher at the News and Information Services segment, fuelled by significant digital advertising and subscriber growth at Dow Jones, including The Wall Street Journal, which reached approximately 3 million subscribers in the last week, a new record, with over 2.2 million that are digital-only.”

Thomson confirmed a strategic review of its Australian newspaper holdings, focusing on the larger brands and their digital reach.

“Clearly the pandemic will have an impact on our results in the fourth quarter, but all of our businesses are embarking on cost-cutting programs intended to deal with short-term need but also to ensure that the company is well-equipped to prosper in a decidedly different business environment after the crisis abates.

“There will obviously be an impact on executive compensation, and it is worth noting that bonuses are often the largest cash component for our senior executives. Pay reductions will be led by our executive chairman, Rupert Murdoch, who is voluntarily forgoing his entire cash bonus for the current fiscal year, and as chief executive I will forgo 75% of my annual cash bonus. The collective cuts in bonuses and other cost initiatives will have a positive impact on profitability and our cash position.”

When asked about sports rights costs by an analyst, Thomson replied there needed to be “a fundamental reset”. He added: “It is absurd to think things might return to normal.”

The company reported fiscal 2020 third quarter total revenues of $2.27 billion, 8% lower compared to $2.46 billion in the prior year period. The decline reflects a $78 million, or 3%, negative impact from foreign currency fluctuations. The rest of the decline primarily reflects lower print-related advertising revenues at the News and Information Services segment and lower subscription revenues at Foxtel.

Revenues in the quarter decreased $94 million, or 8%, as compared to the prior year, reflecting a $25 million, or 2%, negative impact from foreign currency fluctuations. Within the segment, Dow Jones revenues grew 5%, while revenues at News America Marketing, News Corp Australia and News UK declined 16%, 14% and 9%, respectively. Adjusted revenues for the segment decreased 5% compared to the prior year.

Advertising revenues declined 14% compared to the prior year, of which $12 million, or 2%, was related to the negative impact from foreign currency fluctuations. The remainder of the decline was driven by weakness in the print advertising market, lower revenues at News America Marketing and the $14 million estimated negative impact from the COVID-19 pandemic. The decline was partially offset by growth in digital advertising. Advertising revenues at Dow Jones declined 2% in the quarter due to an 18% decline in print advertising, driven by market weakness across conference and traditional sales, partially offset by 25% growth in digital advertising.

Advertising revenues represented 22% of total Dow Jones revenues in the quarter, of which 47% was digital. Thomson was keen to point out that digital ad sales for The Journal were up 25% YOY, while they were down 8% at The New York Times for the quarter.

Digital subscribers and users across key properties within the News and Information Services segment are summarised below:

Revenues in the quarter decreased $77 million, or 14%, compared with the prior year, of which $38 million, or 7%, was due to the negative impact from foreign currency fluctuations. Adjusted revenues for the segment decreased 7% compared to the prior year. The remainder of the revenue decline was driven by lower subscription revenues due to fewer broadcast subscribers, partially offset by higher revenues from Kayo.

Broadcast subscriber churn in the quarter improved to 17.5% from 17.7% in the prior year, primarily driven by improvements at the Foxtel retail channel, partially offset by increased volume of churn from lower-value customers on expiring contracts in wholesale channels. Broadcast ARPU for the quarter was relatively stable at A$79 (US$52).

There was little information about the impending Foxtel drama streaming service believed to be called Binge. However, Panuccio did reveal the service was in beta testing and would launch in coming weeks.

News and Information Services: Expect to continue to see adverse effects on advertising and single-copy sales revenues as a result of widespread business closures, social distancing measures and economic uncertainty.

In April, advertising revenues at Dow Jones declined more than 20% from the prior year, although digital advertising only declined modestly. Advertising revenues at News Corp Australia and News UK in April declined more than 45%, including an approximately 5% negative impact from foreign currency fluctuations. We have also continued to see strong growth in digital subscribers across our key properties in April, including over 20% year-over-year growth in digital-only subscribers at The Wall Street Journal.

Subscription Video Services: While broadcast churn in April was fairly stable, we expect the continued suspension of major sporting events to adversely impact customer churn going forward and/or result in fewer subscribers to our sports services in the near-term, including at Kayo, where we saw a sharp decline in paid subscribers, as noted above. Closures of pubs and clubs and lower occupancy at hotels throughout Australia have also adversely impacted, and are expected to continue to adversely impact, commercial subscription revenues.