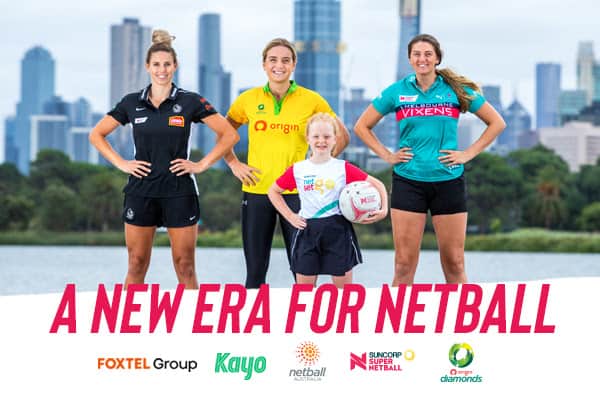 • The games will start airing on Foxtel from next season

Foxtel and Kayo Sports have signed a new agreement that will see them broadcast Australia’s netball games for five years. The games will start airing from next season.

For the past five years, netball has been aired on Nine Entertainment, with a deal made between Nine and Netball Australia in 2016 that is set to expire at the end of the 2021 Super Netball season. The Netball Live App – which ran through Telstra – will be shut down.

As a part of Kayo Freebies, Foxtel will air two Super Netball games per week for free, as well as all finals matches. A different deal made with the Diamonds netball team will see all of their matches aired for free on Kayo.

Foxtel Chief Content and Commercial Officer Amanda Laing said: “We are incredibly pleased to be joining Netball Australia to play our part in consolidating Suncorp Super Netball as the world’s number one elite netball competition.

“By bringing the free and paid broadcast and digital rights together, we can establish a more consistent competition schedule which will strengthen audience engagement. We have a reputation for innovation and will use our production expertise and marketing capability across Foxtel and Kayo to support netball’s continued growth.

“Suncorp Super Netball players are extraordinary athletes and striking ambassadors for their sport. We will work with the players, clubs, sponsors and the whole netball community to raise their profile and deliver the recognition and rewards which they deserve”.

Nine released a statement saying that they were disappointed to lose the netball broadcast rights.

“We are disappointed that after working with netball to grow the game for the past five years we find they have taken the deal with Foxtel which is supported by government money which we don’t have access to,” said a Nine spokesperson.

The government money Nine refers to is a grant given to Foxtel to “support the continued coverage of women’s, niche and other under-represented sports.” A total of $30 million was given in 2017, but last year the government announced that they would be giving Foxtel another $10 million over two years, bringing the total grant to $40 million.

Foxtel commented yesterday:
“Netball is the premier elite women’s sport in Australia and has a well-established presence on television. The finances received by Foxtel in relation to the under-represented sports grant, which currently expires mid-2022, have not been used to acquire the rights as announced by Netball Australia commencing in 2022.
“The comments made by a Nine spokesperson regard this matter are poorly informed and simply wrong.”

“Nine and Telstra saw the potential of the league and provided support at a critical time,” said said Netball Australia interim chief executive, Ron Steiner. “We look forward to working closely with them during season 2021 and thank them for their commitment to the game,”

Super Netball Commission chair, Marina Go, says that the deal will be positive for Australian netball. “There are many winners in this deal, and that includes the world’s best netball players who will enjoy contract security and some of the best conditions of any female athletes anywhere,” she said.

The upcoming 2021 Suncorp Super Netball Season will be broadcast on Nine, Telstra TV, and the Netball Live Official app from Saturday, May 1.