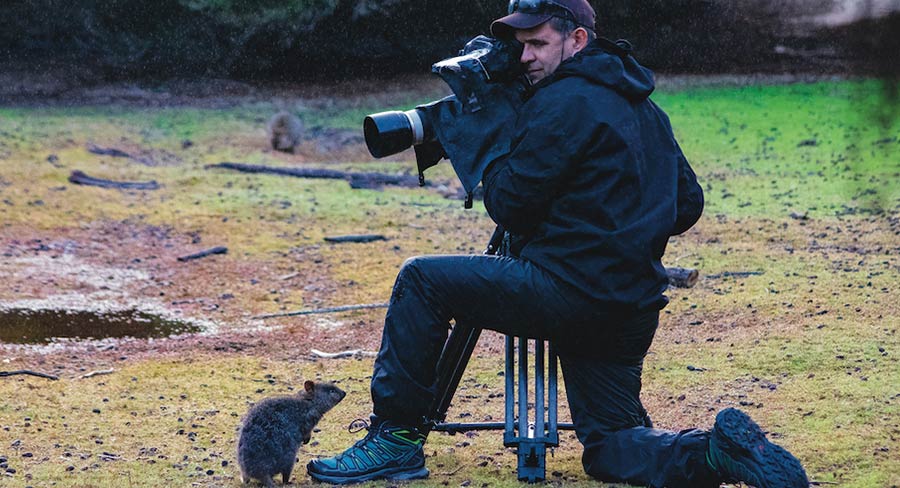 “The documentary and feature film industry is very vibrant in Perth”

The mysterious Quokka, dubbed the happiest animal on earth, is the star of Sea Dog TV’s latest and unique wildlife film Rottnest Island Kingdom of the Quokka.

The world premiere screening is on Nat Geo Wild Australia, Sundays from December 16 and 23 at 8:30pm AEST (Foxtel and Fetch plus the National Geographic App). As joint CEO, Jodie executive produces, produces and manages the production accounting on all of the Sea Dog TV’s projects.

Jodie also produced Super Predator, the highest rating program for Discovery US’s Shark Week in 2015. She has also worked as an independent production consultant for the Producer Offset Unit of Screen Australia.

Leighton told Mediaweek four years ago he was filming whales off Rottnest Island and stopped on the island for a break. He suggested to the environment manager on the island he would like to do a film on the wildlife on Rottnest Island, Carnac Island and Penguin Island – showing the unique and different animals that inhabit each land mass. The subsequent series was filmed and produced over the following three years. For the first time the entire life-cycle of the Quokka has been captured on film and will be shown to the world. “William McInnes narrated the series and has done a wonderful job,” said Leighton. “While living and working in Western Australia he spent some time on the island.

“The film is the first of its kind to explore the islands’ wildlife in such detail and capture behaviour never filmed before. The series will screen to an international audience over the coming year.”

Leighton told Mediaweek about some of the production company’s other titles:

“Bushfire Wars – December 2018 – was the highest rating factual program on the night across the Foxtel platform and highest rating show for National Geographic Australia in the last two years.

“Dolphin Dynasty, Wildlife Rescue & Forensics, Super Predator, Birthplace of the Giants, Hello Birdy, On a Wing and a Prayer, Whale Patrol and Shark Bay are some of our other projects.”

Leighton also worked on the first 14 seasons of the US reality series Survivor for CBS America. He has also worked on David Attenborough wildlife series for the BBC.

Leighton noted the production sector in WA is very active:

“The documentary and feature film industry is very vibrant in Perth with a number of high rating TV documentary series running on national and international networks. The feature film sector is extremely busy too with a handful of features in production currently. Simon Baker’s Breath – recently filmed in WA – won gongs at the recent AACTA awards.”

As to what is next from Sea Dog TV, Leighton said: “We have a film on snakes that has been commissioned by National Geographic Wild that will be shooting in 2019. We are also producing a theatrical documentary on the incredible life-story of quadriplegic film-maker Jaimen Hudson and we are producing a blue-chip, live orchestral theatrical film, titled Wild Western Australia that will be narrated by A-list Australian Hollywood talent.”