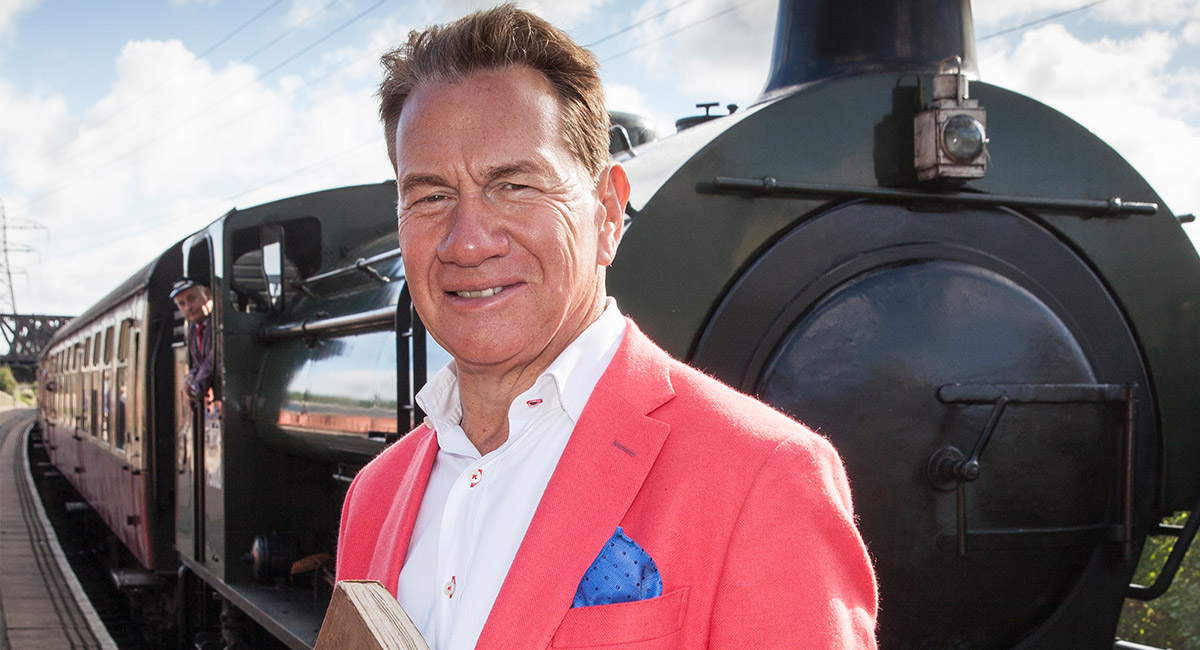 The Great Railway Journeys programs continue to be key ingredients in SBS primetime. The UK FremantleMedia-produced series, hosted by Michael Portillo, have been phenomenally successful for SBS – so much so that the host has recently been on air at 7.30pm on Tuesday, Thursday and Friday on the channel. Most weeks one of the various episodes ranks as SBS’s most-watched program of the week.

Mediaweek was able to spend some time with the host recently, albeit on the end of a telephone. Portillo was speaking to us from Spain, where he spends much of his time, “sheltering in the air conditioning”, he said on the day we spoke during a heatwave that had spread from the UK.

After some preliminaries, he adopted the friendly yet formal manner he exudes during the program.

“What would you like to ask, sir,” he said invitingly.

We started with the origins of the Great Railway Journeys format which Portillo revealed track back to 1998 for an episode that was screened the following year. “That happened very shortly after I lost my seat in parliament in 1997 in rather spectacular circumstances.

“It was a landslide win for the Labour Party and I was quite a prominent member of the [Conservative] Government in what was thought to be quite a safe seat. And I might add quite an unpopular Government.

“The moment that I lost my seat unexpectedly has gone down as the ‘Portillo moment’. Even in the recent UK election people were asking if there would be a Portillo moment, which now means the unexpected loss of a seat in Parliament by one who is prominent.

“I had to make some sort of recovery after the loss. I was quite happy not to be in Parliament as my party had been reduced to a rump. I had made a couple of documentaries and then I got the opportunity to make an episode for a series called Great Railway Journeys. It had a different presenter each episode and the hosts were encouraged to be autobiographical. They asked me if I would make a program about my father in the Spanish Civil War. My father was on the losing side and became a refugee in Britain at the end of the war.

“While going around Spain by train I was able to talk to my uncles who were still alive. Five of them had been fighting on the other side during the Spanish Civil War. It was a poignant, emotional journey for me.

“It was then fully a decade after that [and another stint as a UK politician] that a television production company was dreaming up a new idea for a travel and history show. They had the idea of using the old Bradshaw’s guidebook. The chairman of the production company remembered my earlier show and suggested me. That was about 250 episodes ago.

“I have been astonished that it has lasted so long.”

The full extent of his Australian success hadn’t filtered back to Portillo. As we explained how his shows were screening three nights a week on SBS, it became clear to Portillo why a trickle of emails from Australia had turned into a “torrent”.

“I am most grateful to Australians for taking it on board and supporting the programs.”

The various series have always been made within the FremantleMedia empire. The production house within the company was formerly called Talkback Thames but has since been rebranded Boundless Television. “For the last seven years we have had the same executive producer – John Comerford. We have been able to maintain consistency of product with many of the team staying with the show. We have two different production teams working with me as one does the reconnaissance work on a series while we film another.

“We have developed a corporate style that allows us to develop a richer product year by year.”

The biggest change technically on the format over the years has been the use of better cameras. “We have invested significantly in the cameras, giving the series a much more cinematic look.”

And what about those aerial shots? “We don’t use many drones. In the UK we charter a helicopter to fly the routes we are filming. In Europe we sometimes buy in helicopter footage. Very occasionally we get to use a drone.”

There are typically six people with Portillo when they film. “The director and the camera person are one. We have a sound man, and I have only worked with two different sound guys in nine years.

“We have an assistant producer who literally keeps the show on the tracks – looking after the rail timetable and who we have to interview next. Normally we then have two younger people, one who normally drives our van and the other who downloads the footage each day to a hard drive.”

Although working on the different seasons of Great Railway Journeys has dominated Portillo’s media schedule, he still finds time for other programs.

“For the past 14 years I have been on a weekly BBC One political show called This Week which runs for 42 weeks a year. I do a radio show on Wednesdays called The Moral Maze, with about 20 episodes a year. I have recently signed with Channel Five to do a new series about abandoned buildings, a history show provisionally titled Abandoned Britain.”

This Week features Portillo with Andrew Neill. Their longtime on-air colleague was Labour politician Diane Abbott, who stood down after becoming a prominent member of the shadow cabinet.

Abbott copped a beating from both the media and her political opponents at the end of the recent election campaign after a slip-up during a media interview. Asked if he thought the treatment of his former TV colleague was unfair, Portillo said: “I expect if I was where Diane is I would feel it was unfair. I have often thought the treatment of me was unfair. Politics is a very rough business. I decided to withdraw from it and I feel very happy about that. If you remain in politics you can hardly complain.”

“The British Bradshaw’s, which is from about 1864, is a proper guide book. For the Great Continental Railway Journeys series in Europe we used a 1913 edition. It is a huge book predominantly of timetables and then at the back of it is a guidebook. Both books have been republished recently and the British book is certainly a bestseller.”

Portillo never lets go of the guidebook during the program, telling Mediaweek they only have one copy of the originals. “It is a very, very precious thing and we treat it with great reverence. As soon as I have finished reading from each episode it is put away in a box. The box is actually illustrated with Thomas the Tank Engine and I am constantly followed by a young man or a young woman with that box with a Bradshaw’s in it. It is not unlike my ministerial career where I was followed around with a person carrying a red box of official secrets.”

Because of the time he now spends in Spain and his journeys around Europe by train, we asked if Portillo had changed his mind about the UK and the EU. Portillo said: “My position is somewhat complicated.

“I am very sceptical about the European Union, but I would have preferred there not be a referendum. My feeling was because we were out of the single currency, the euro, I thought we were free from most of the dangers.

“But we did have a referendum and I voted for Brexit. However, this extraordinary election result we have just had means we are not going to have the sort of Brexit Mrs May had been planning. I find it hard to predict where we might end up. Maybe with some sort of middle of the road fudge probably.”

Portillo made it clear that Brexit doesn’t mean people wish to turn their back on Europe. “I have two European passports – British and Spanish. I have a life in Spain as part of a big community. What does strike me is that we have very different political values across Europe. To me the idea that you can successfully govern Greeks, Spanish and Portuguese and British in a single entity and make it accountable and democratic…I don’t see how that works.”

Despite some reports otherwise, the Grenfell Tower was not in Michael Portillo’s former London electorate. But it was close to it. “There has been some misunderstanding about that. The boundaries have changed since my day. However, I have been horrified by it and somewhat ashamed.

“It is not the sort of picture of our country that you want sent around the world – the idea that warnings might have been ignored and there could have been penny pinching.

“Seeing public housing burning like a torch is not an image we want. Apart from horror, I have felt a certain amount of shame.”

Portillo said he hoped because it had been such a horrific incident that it will lead to significant housing reform.

“We have shot four one-hour episodes in India. You only have to turn the camera on and there is much vivacity and colour and noise going on all around you. 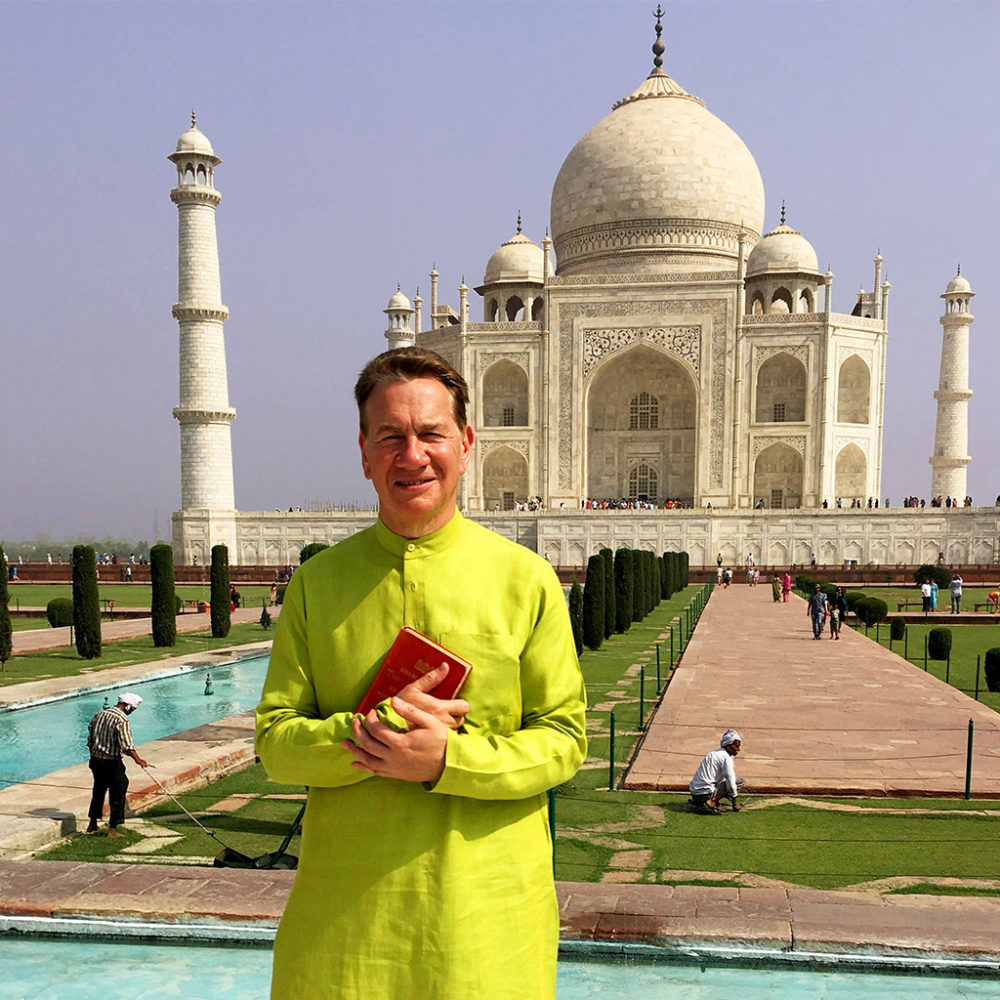 “Sometimes on the British journeys I lament that I am sitting there on my own in a compartment, looking like a very lonely man. That doesn’t happen in India where there is a crowd everywhere. I hope that feeling of commotion translates to the audience. We even have a separate part of one episode on crossing the road which becomes such an adventure every time you attempt it.”

Portillo said he has had many requests for an Aussie TV adventure. “I have been there a couple of times and I would very much like to film there. It is not my decision and I don’t know what might be the complications.” He added he thought it likely they would shoot here one day.