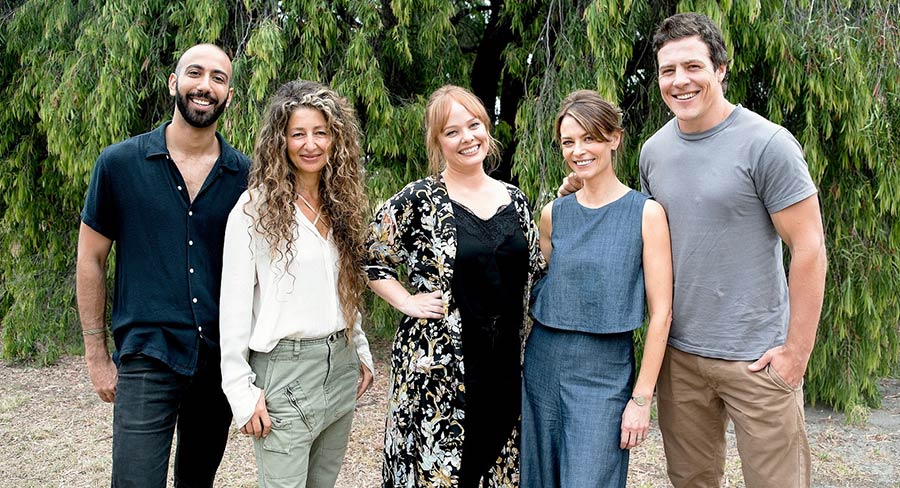 • It would be nice if 10 made an edgy Aussie drama one day but for now, Five Bedrooms is fresh, diverse and off to a sweet start.

There have been lots of TV shows about share households, but not that many where people buy properties together. There was The Brady Brides where wacky Marcia (Maureen McCormick) and uptight Jan (Eve Plumb) got hitched, and the four newlyweds bought a place together, on the advice of their real estate mom Carol (Florence Henderson).

Five Bedrooms (Wednesday on 10) doesn’t have two sitcom sisters, but it does have five strangers who meet at a wedding reception. Kat Stewart plays a neurotic lawyer who has a lot in common with Jan Brady, and that’s a nice change given the character of Billie Proudman in Offspring was definitely more Marcia Marcia Marcia.

TV Week must be thrilled that Stephen Peacocke is also in the cast, because that’s their front covers sorted for the next few months. He plays a happy-go-lucky tradie and if the show takes off, he might finally be able to leave the brooding Brax behind him.

It would be nice if 10 made an edgy Aussie drama one day but for now, Five Bedrooms is fresh, diverse and off to a sweet start. Ever since Offspring, 10 love setting their dramas in and around Melbourne and Five Bedrooms takes place in a leafy suburb that seems a world away from Brunswick Street (Offspring) and Toorak (Playing For Keeps).

Further north in Brisbane, Harrow (Sunday on ABC) is back for a second season. He has survived being shot in the first season cliffhanger, and given he was such an easy target living on a yacht riverside, one might assume he might move. But that’s not Harrow’s style, and neither does his gunshot wound stop him heading off to a bar in search of a quickie.

When Harrow’s (Ioan Gruffudd) one-night-stand turns out to be the new pathologist, it’s awkward but just for a little bit, because there’s always some new dead body to examine. His sexy co-worker is played by Jolene Anderson from All Saints, and that’s a good thing because she already knows how to speak medical jargon.

Harrow doesn’t mind showing a bit of gore but MotherFatherSon (Sunday on BBC First) takes it to a whole new level, with a skull-drilling brain operation in its first episode. This superb BBC drama stars Richard Gere as a powerful Rupert Murdoch-like publisher. There have now been several dramas supposedly inspired by the Murdoch family (and HBO’s Succession is coming back for a second season), but this one may be the scariest … and the best.