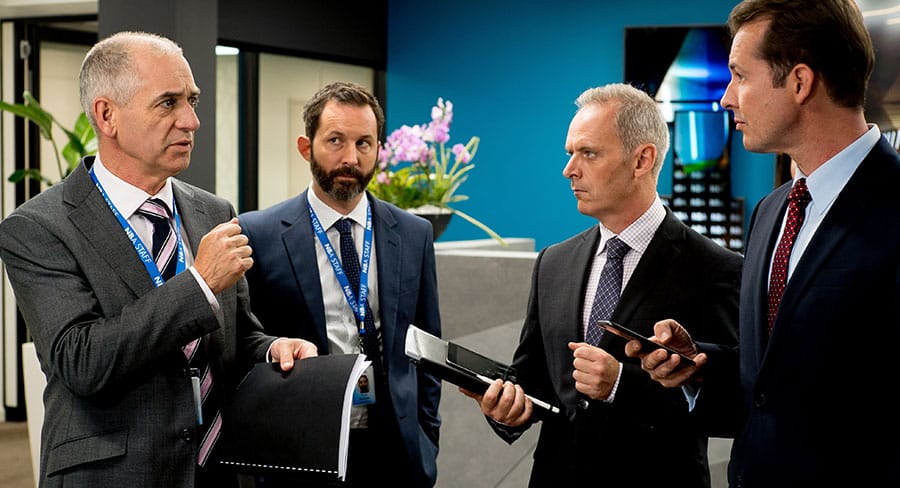 • Utopia is still a great reflection of modern bureaucracy

Utopia (Wednesday on ABC) is back with its fourth series and nothing much has changed in this popular government workplace comedy.

Whilst it is good to see any Working Dog show, this is starting to feel like the same situations and jokes in every episode. But perhaps that’s the point. The Office is the most popular show on Netflix, with twice as many viewers re-watching it as any of their original fare. Clearly many, many viewers relate to workplace humour and they never tire of it.

Utopia is still a great reflection of modern bureaucracy and we are even more cynical about such institutions than when the show first began in 2014. This is a show rooted in reality, and that also applies to the timely new BBC drama Dark Money: Shattered Dreams (Friday on ABC).

When a young British actor returns from starring in a Hollywood blockbuster, a horrible truth is revealed to his naive parents when they learn he was sexually abused by the movie’s powerful producer. Their decision, about whether or not to accept a cash payout, is just the beginning of this powerful examination of abuse survivors and their families.

There is also a tragic truth at the heart of The Righteous Gemstones (Tuesday on FoxShowcase) as a family of televangelists fleece their flock so they can live a lavish lifestyle. Eli Gemstone (John Goodman) can handle the competition (Dylan McDermott), but he can’t control his juvenile offspring (Danny McBride, Adam Devine & Edi Patterson) who all have their own garish mansions inside a giant gated estate.

Created by Adam McBride, this is an ambitious leap forward from his previous comedies Eastbound & Down and Vice Principals. The situations are wackier but the tone is less vulgar, if you don’t count the ostentatious displays of wealth. I’ve binged all six episodes (keep watching for Walter Goggins) and news about its renewal has to be a no-brainer.

Morning television has just lost one of its brainiest now that Virginia Trioli has finished up with News Breakfast. Good luck to Lisa Millar when she takes over next Monday.

And thank you to Sunrise who had the funniest interview of the week when Adelaide’s international superstar Hans got Kochie rolling in the aisles.

“I’ve been on this show so many times, people think I’ve joined One Nation”, he quipped and with lines like that, Hans deserves his own sitcom with Working Dog. Or maybe he could guest-edit The Australian’s brand new “gender” section, because anything the cross-dressing accordionist has to say would be better the nonsense currently on there.