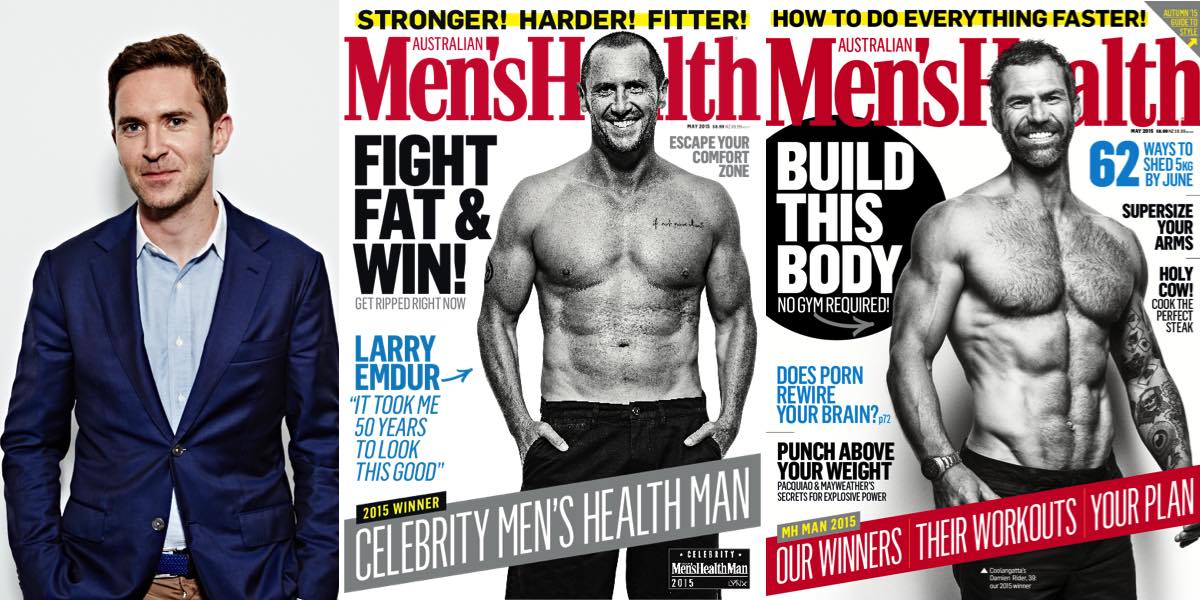 With the holiday season just over four weeks away, Australians dream about unwinding on holidays, and Christmas feasts. Meanwhile, Pacific Magazines’ Men’s Health is calling on readers to submit entries for 2016 Men’s Health Man competition.

First launching in 2009, the Men’s Health Man campaign emphasises it’s never too late to get back into shape. And if that’s not inspiring enough, then the chance for the winner to be on the cover of the monthly title might just do the trick.

“The reason we launched the competition is that people look at our magazine and dismiss the result as being unattainable or unrealistic for regular guys. The quality of the entries we get for Men’s Health Man proves that this isn’t true. There are a lot of Australian men out there who are willing to put in the hard work, the discipline and the sacrifice to look after themselves and get themselves into amazing shape.”

“We did this to tap into a whole load of other inspirational stories,” Benedictus explained. “In 2015, for example, we helped Larry Emdur get into phenomenal shape for his 50th birthday. That was an inspirational story because it proves that you are never too old to get into the best shape of your life. The celebrity Men’s Health Man helped the competition get bigger and better than ever before.

“Aside from all that, just the sheer amount of publicity it generates…The amount of radio and press coverage we got really helped boost the profile of the brand.

“The competition genuinely resonates with our readership. This year with our May issue the sales were up 29% year-on-year.”

“Men’s Health is the original.
People say imitation is the
sincerest form of flattery”

The celebrities contending for the title in 2016 are yet to be finalised. The announcement will be made in early January.

Despite a slump of over 12% in readership in the 12 months to September 2015, the Pac Mags brand continues to deliver the biggest readership of 480,000 in the men’s title category.

Talking about how the title is different from the rest of the category, Benedictus said: “Men’s Health is the original. People say imitation is the sincerest form of flattery.

“Compared to others, we don’t target the fitness category, we target the ambition.

“Men’s Health content is not limited to just health and fitness content. We are a genuine lifestyle brand. We cover fashion, travel, grooming, technology, and career.

“This year we’ve ensured that Men’s Health is by far the dominant force in the men’s lifestyle sector. And we are really determined to work harder than ever to consolidate our position in the coming year.

“We are a one-stop shop for the Australian man.”

>>  Changing role of the editor

This month marks one year of Luke Benedictus as editor of Men’s Health Australia. He started working at the title as a deputy editor in 2008, under then editor Bruce Ritchie.

“When I started it was just about Men’s Health the magazine. Now it’s about Men’s Health the brand. Today what really excites us is that…we can reach our audience through our printed pages, the website, through social media, our events – which is bringing the world’s biggest urban obstacle course to Sydney in December – and we’ve just started doing a Men’s Health podcast. So the main thing is there are more touchpoints than ever before and that is really, really exciting for a big brand like Men’s Health.

“Any successful brand has to think about multiplatform. When we do an interview we look at how it’s going to work, how we can pull it apart for social media and how we can make it work online.”

At this time last year, Men’s Health came out with its December issue with ruggedly handsome Australian cricketing great Mitchell Johnson on the cover. Fast forward to present, Johnson announced his retirement from all forms of international cricket this month.