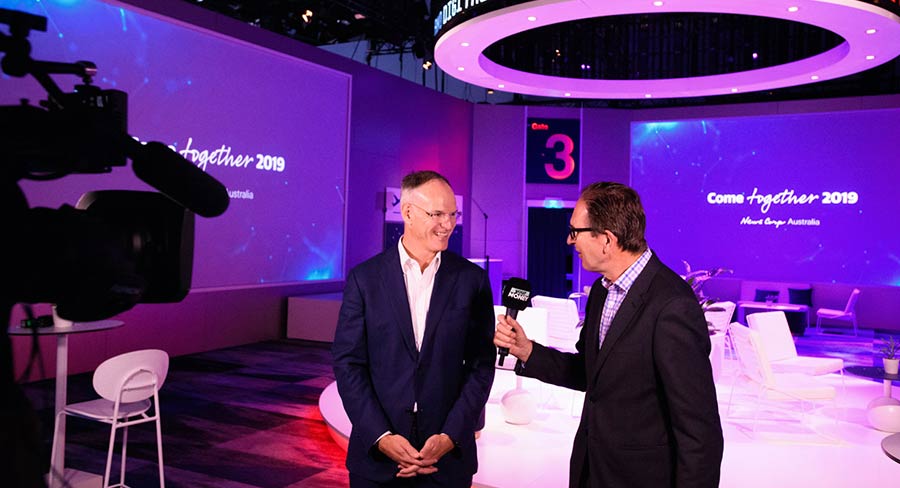 News Corp to cut 50 staff in Australia, mostly from HWT

News Corp is set to axe 50 jobs across its Australian business, including editorial roles from major metropolitan mastheads, reports The AFR’s Max Mason.

The journalists’ union, the Media, Entertainment and Arts Alliance, said on Twitter there would be about 50 jobs to go, about a third of which would come from the Herald Sun and Weekly Times in Victoria.

Cuts were flagged by News Corp Australasia chairman Michael Miller in a series of interviews in Nine and News Corp papers on Monday, however he did not specify the number of staff who would be affected.

Miller said cuts would come from across the business, not just editorial and are not in just one geographic location.

“As we get more data, we probably need some new skills journalistically into the business and we’re increasingly bringing in audio, video, social,” he said.

It was a rough day on the ASX for media stocks yesterday, in particular recent market darling Nine Entertainment, whose shares lost more than 5 per cent, reports The Australian’s Leo Shanahan.

All major media stocks were down in the worst day of trading for the ASX in five months, as global nervousness over a China-US trade war bled into the local bourse.

Scott Phillips, chief investment officer at The Motley Fool, said Nine was “working hard to do a few things at once” including integrating Fairfax and “the on-again, off-again possibility of acquiring 100 per cent of Macquarie Media”.

“So far so good – ratings are strong. Nine is swinging the cost-cutting axe with gusto, and the online business is delivering good results,”

“We are focused on Foxtel and we’ve been pretty public on that as being the priority,” he said. “In terms of free-to-air, which is probably the only other area we can enter into, we don’t see that as being a market at the moment [that we want to get in to].

“To have a choice between Foxtel or free-to-air, [we’d] definitely choose Foxtel. It’s earning good money and we’re confident, we’ve got a plan there – we just need to focus on executing.”

President Donald Trump raised a familiar complaint – “unfair” coverage by CNN – in a pair of Monday morning tweets. But this time he called on supporters to boycott the cable news network’s corporate parent, AT&T, to drive the point home.

“I believe that if people stoped [sic] using or subscribing to AT&T, they would be forced to make big changes at CNN, which is dying in the ratings anyway,” Trump tweeted. “It is so unfair with such bad, Fake News!”

The president has repeatedly taken aim at the news network, which he routinely derides as “fake news,” and many of its on-air personalities over their coverage of him and his administration. Trump was vocal in his opposition to AT&T’s $85 billion ($122b) acquisition of Time Warner – “too much concentration of power in the hands of too few,” he has said. But critics contend his position is intrinsically linked to his ire at CNN.

Apple summarised the changes this morning: 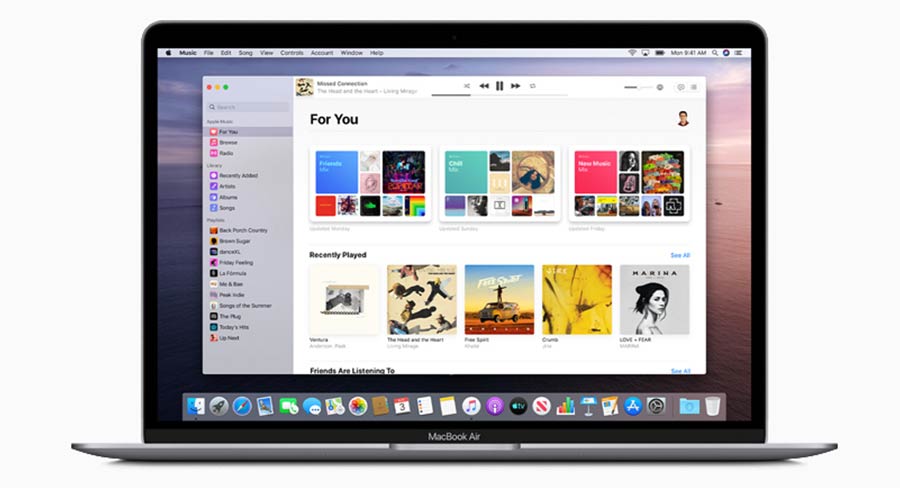 The new Music app for Mac is lightning fast, fun and easy to use. Apple Music will help users discover great new music with over 50 million songs, playlists and music videos. And users will have access to their entire music library, whether they downloaded the songs, purchased them or ripped them from a CD. For those who like to own their music, the iTunes Music Store is just a click away. 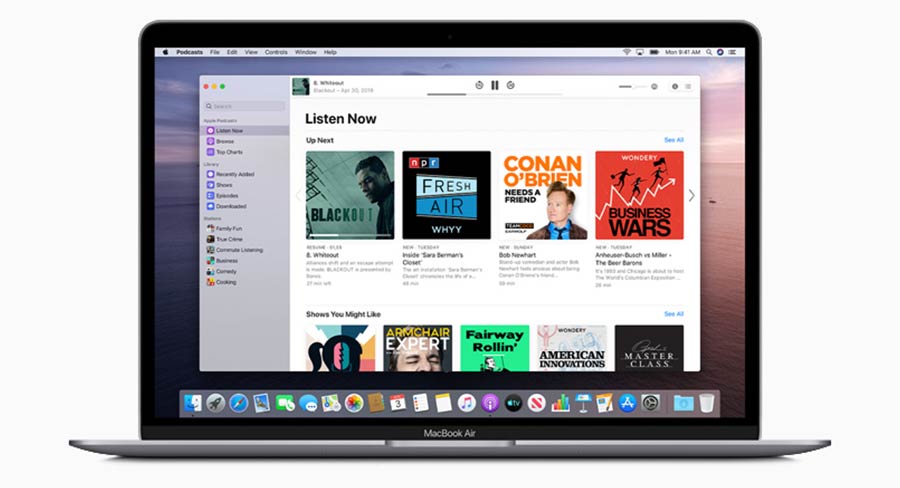 The all-new Apple TV app brings together different ways to find and watch movies and TV shows into one powerful app. The Apple TV app features Apple TV channels, personalised recommendations and over 100,000 iTunes movies and TV shows to browse, buy or rent – so users can enjoy 4K HDR and Dolby Atmos-supported movies. The Watch Now section features Up Next, where viewers can keep track of what they are currently watching and resume on any screen. This fall, Apple TV+, Apple’s original video subscription service, will be available in the Apple TV app.

The popular Apple Podcasts app offers more than 700,000 shows in its catalogue and the option to automatically be notified of new episodes as soon as they become available. The app also features new categories, curated collections by editors around the world and advanced search tools that can find episodes by host, guest or even discussion topic.

Eight Aussie celebrities from across many genres will star in a new Channel 7 show that will revisit iconic 1980s movie Dirty Dancing’s most memorable dance moves and moments, reports News Corp’s Jonathon Moran.

The stars will fly to the United States to film in Virginia at Mountain Lake Lodge, which was the location for fictional resort Kellerman’s in the Hollywood movie.

Former Dancing With The Stars judges Kym Johnson and Todd McKenney will guide celebrities through the choreography.

The magazine story headlined “House Rules’ Joh Griggs and Jamie Durie’s bitter rivalry EXPOSED” cited an unnamed “insider” who claimed, “There have been secret crisis meetings at Seven,” and that “Joh is ‘furious’ that the network appears to be promoting Jamie and sidelining her.”

Griggs, who has taken to social media to debunk mag stories in the past, wrote on Instagram:

“Woman’s Day – you have done it again. Don’t you ever get sick of writing such fantasy rubbish??? One thing’s for sure, you clearly don’t get sick of rehashing pics from a thousand years ago! It was about this time last year or was it was it the year before where you used the same pap pic you’ve recycled this week (bottom article)… Back then it was about how I’d apparently ‘snapped.’ Of course that didn’t happen then, nor are there any secret crisis meetings behind closed doors at Seven about Jamie and me happening now. In actual fact – Jamie and I just finished a great week away on the road together shooting for Better Homes and Gardens. We had an absolute ball! So sorry to have to explain to everyone yet again… how you fill your pages with complete and utter untruths. I can’t wait for the day that NO-ONE buys your trashy mag!!!”

Griggs added a number of private pics with Durie to prove her point.

The turf war that has seen NSW reinvent the spring carnival and lay down a challenge to Victoria’s grip on the racing calendar has intensified with $45 million to be won by horses competing across eight successive Saturdays, reports The Australian’s Brendan Cormick.

In a challenge to Melbourne spring racing, Sydney will host an expanded Everest carnival over six weeks with a race worth at least $1m every week. The $14m Everest (1200m) on October 19 is the centrepiece with new races in the weeks either side of the world’s richest turf sprint and others with increased stakes.

The driven management of Racing NSW, not content to rest on the mega-million-dollar races initiated in recent years, have added key lead-up events to The Everest (1200m) at Randwick, the nation’s richest race worth $14m, and the $7.5m Golden Eagle (1500m) for four-year-olds at Rosehill on November 2.