Despite escalating pressure ahead of the 2020 presidential election, Facebook has reaffirmed its freewheeling policy on political ads, saying it won’t ban them, won’t fact-check them and won’t limit how they can be targeted to specific groups of people, reports AP’s Barbara Ortutay.

Instead, Facebook said it will offer users slightly more control over how many political ads they see and make its online library of political ads easier to browse.

These steps appear unlikely to assuage critics – including politicians, activists, tech competitors and some of the company’s own rank-and-file employees – who say that Facebook has too much power and that social media is warping democracy and undermining elections.

And Facebook’s stance stands in contrast to what its rivals are doing. Google has decided to limit targeting of political ads, while Twitter is banning them outright.

Social media companies have been trying to tackle misinformation since it was learned that Russians bankrolled thousands of fake political ads during the 2016 elections to sow discord among Americans.

News Corp Australia is standing by its coverage of Australia’s bushfire crisis after facing internal ructions from being accused by an employee of a “misinformation campaign” to take attention away from climate change, reports AFR’s Max Mason.

A leaked email obtained by The Australian Financial Review shows a staff member openly expressing anxiety and disappointment in the company’s news coverage of the bushfires.

News Corp Australia commercial finance manager Emily Townsend – who resigned in December, according to the company – responded to an all-staff email from Australasia chairman Michael Miller that outlined what the company was doing to support the country during the crisis.

Celeste Barber has put her hand up to host the mammoth bushfire relief concert in Sydney next month alongside dozens of big-name artists, reports The Daily Telegraph’s Kathy McCabe and Cameron Adams.

Queen and Adam Lambert, k.d. lang and Alice Cooper are among the international artists who will join with dozens of Australian stars for the Fire Fight Australia concert on February 16.

Stars turn out for True History of the Kelly Gang Premiere

The stars of Stan Original Film True History of the Kelly Gang turned out in style on Friday at a stunning premiere event along iconic Sydney Harbour at Westpac Open Air Cinema.

Director Justin Kurzel was joined by stars Essie Davis, Orlando Schwerdt and Sean Keenan, along with writer Shaun Grant and producer Liz Watts to celebrate the launch of the acclaimed film based on Peter Carey’s Man Booker Prize winning novel. Joining them were a collective of Australian entertainment heavyweights, including Joel and Nash Edgerton​.

Starring George Mackay, Essie Davis, Charlie Hunnam and Russell Crowe, Justin Kurzel’s True History of the Kelly Gang shatters the mythology of the notorious icon to reveal the essence behind the life of Ned Kelly and force a country to stare back into its brutal past.

Spanning the younger years of Ned’s life to the time leading up to his death, the film explores the blurred boundaries between what is bad and what is good, and the motivations for the demise of its hero. Youth and tragedy collide in the Kelly Gang, and at the beating heart of this tale is the fractured and powerful love story between a mother and a son.

The Block moves into Brighton

The next season of The Block is edging closer to production… already, reports TV Tonight.

After having been confirmed for a season in Brighton, preparations are underway at New Street.

The Daily Mail reported five derelict homes have been relocated to a 2,761-square metre building site which reflects the 2017 Elsternwick season. These homes are understood to all be from the 1930s – 1960s.

A two-storey site office sits at the rear of the property, which was previously home a nursing home site. Filming with contestants is not expected to get underway until next month.

Tears, Socks, and Magic starts week 2 of I’m a Celebrity.. Get Me Out of Here!

After eight days of slumming it in the jungle…the cracks have finally started to appear.

Unfortunately, this all began because of the cracks on Tanya Hennessy’s feet. Hennessy has a foot fungus and Ryan Gallagher mistook her last pair of clean dry socks, for his own.

Cue lots of finger-pointing, he said, she said, tears and tantrums, all leading up to those famous two words: I’m sorry.

Whilst it seems harsh, the removal of one’s creature comforts can actually work for the greater good. Case in point, Tanya again.

Tanya’s tower of emotion continued when she had a heart-to-heart with resident camp dad Miguel Maestre about her depression and anxiety easing off because of her jungle stay. Citing the benefits of human connection for one’s soul, social media sensation Tanya broke down as she revealed she spends too much time in cyberspace and not enough time in reality.

Also struggling with the jungle detox, comedian Nikki Osborne had a case of the old waterworks by the waterfall. Breaking down in front of unlikely ally Erin Barnett, it’s clear the mother-of-two is struggling being away from home.

In tonight’s blockbuster trial, Dreadmill, Charlotte Crosby, Rhonda Burchmore, Dale Thomas and Maestre were pushed way outside their comfort zone. Suspended off a cliff 1600 metres above the ground, the awesome foursome had to run on a treadmill that was dangerously close to the edge. 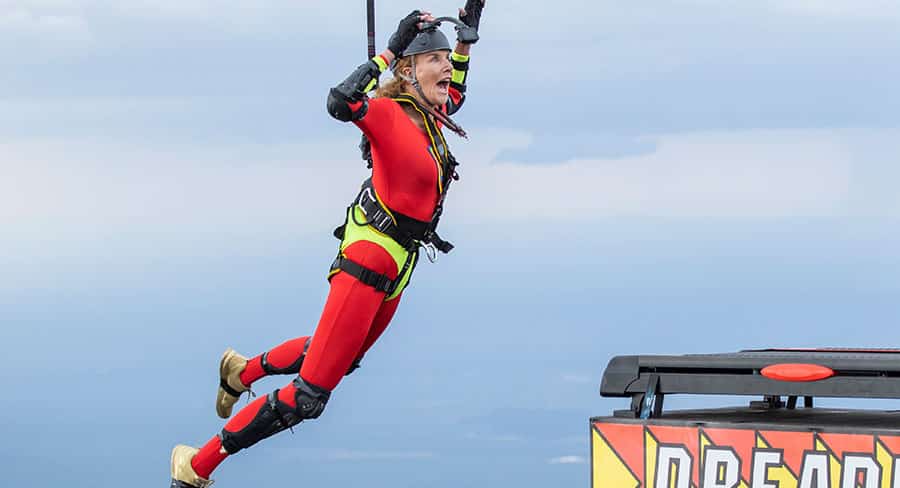 Whilst Thomas and Maestre soldiered on and secured an impressive five stars between them, Crosby and Burchmore let panic overtake them. A virgin to the gym and thus to the treadmill, it’s safe to say Rhonda won’t be joining Anytime Fitness after this.

Crosby, who has an open fear of vertical drops, mustered up the courage to step out onto the moving belt to win two stars for camp. There’s a reason why her workout video became the UK’s fastest-selling fitness DVD. The girl can run. And fast. 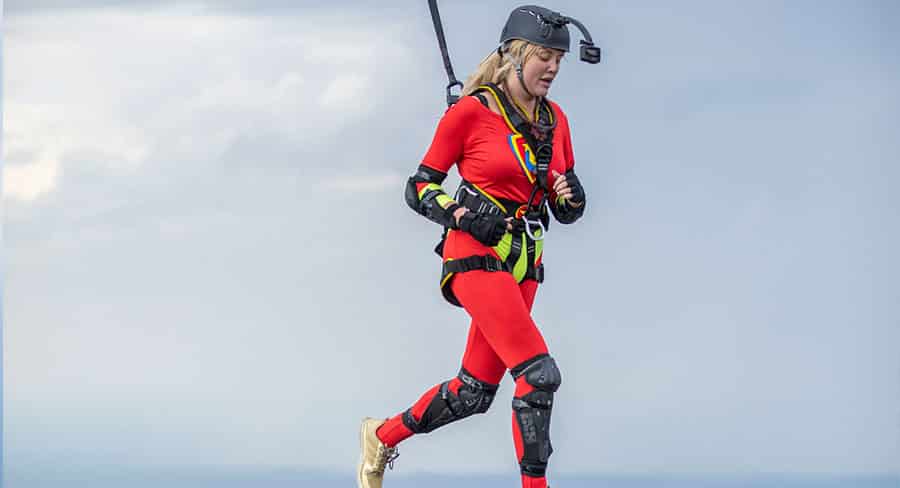 Spilling the tea to her jungle squad, Burchmore opened up about her friendship with actress Brooke Shields. The two of them became friends after Shields asked to meet her after a show to ask where she got her jeans from.

One day on a shopping expedition together, Shields allegedly got a phone call from Michael Jackson. It Jackson was desperate to marry her. 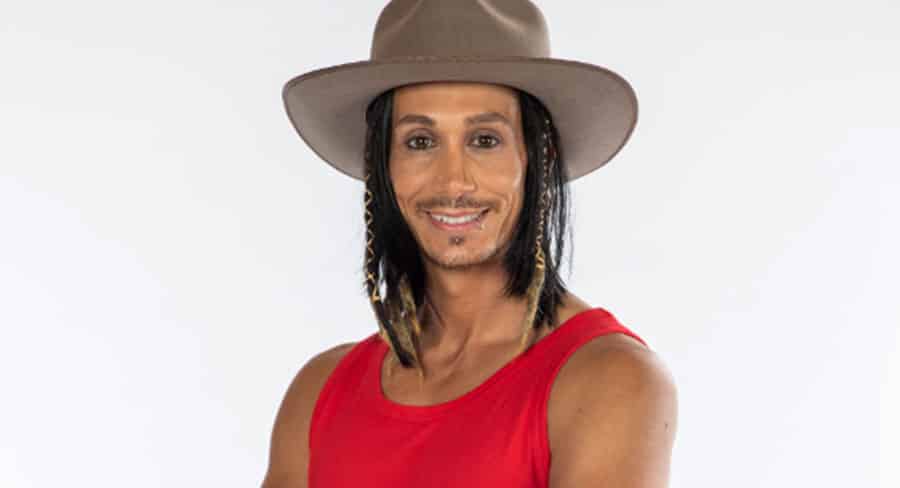 And if the show wasn’t enough of a cracker already, 10 introduced the marvellous magician Paul Cosentino as the 13th cast member.

Tomorrow night ophiophobic Tom Williams is forced to face his fear of snakes in the terrifying trial, Bad Breath.

Previously the host of Tuesday Mornings and on the production team for Breakfast, Ammenhauser will begin hosting ‘Up For It’ from 6am-9am Weekdays from January 13.

Ammenhauser takes over from Ruby Miles on the slot, who hosted the show for two years, and is now the assistant festival programmer and Laneway Festival.

Previous hosts to have moved on to bigger things include Lucy Smith (triple j Mornings) and Georgia Hitch (ABC News).

I’m so flippin’ excited to be the new presenter on Up For It and can’t wait to see where we take the show in 2020,” said Ammenhauser.

Changes continue to come thick and fast at the newly rebranded Nine Radio, with the network announcing changes to Overnights, reports Radio Today.

2GB Overnights host Michael McLaren will now be heard on a national basis, across 3AW, 4BC and Nine Radio’s network stations.

His show will take place midnight – 5:30am Monday to Fridays.

Attention then turns to Wednesday’s Raw episode, where fans can see WWE Champion Brock Lesnar in action, along with Becky Lynch, the Raw Women’s Champion and WWE veteran, Randy Orton.