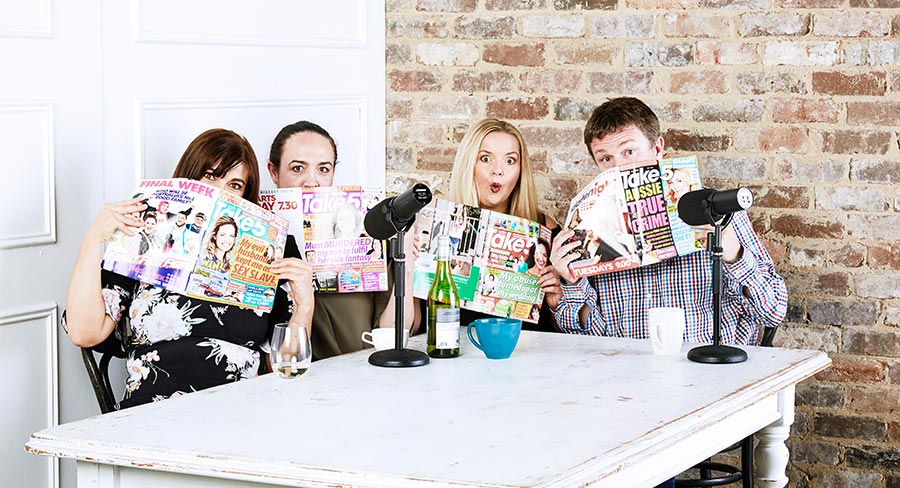 With a number of podcasts launching off the back of magazine brands so far this year, Brooke Hemphill from Magazine Networks takes a look at the growing trend.

If you needed further evidence that magazine brands have moved well beyond the printed page, look no further than the explosion of podcasts being produced by Australian magazine publishers. In recent months, a variety of podcasts have launched off the back of popular magazine brands and there are plenty more in the works.

The driver of the growing interest in audio from publishers is, according to Louisa Hatfield, general manager, entertainment & family at Pacific, the audience. Hatfield said: “We need to connect with our audience on whatever platform they’re consuming content. And we all know that podcasts are one of the fastest-growing storytelling mediums.”

Research firm Edison has reported 30% of Australians have listened to a podcast at some point with 17% having listened to one in the last month. Edison research also noted the audience for podcasts is predominately 18-to-54-year-olds with the Australian podcast listener an affluent, educated consumer.

Although most people are listening to podcasts while at home, the car is coming in a close second.

True crime is a trend that’s fast become a podcast staple following the US smash hit Serial, which launched back in 2014. In February, Pacific’s New Idea launched New Idea Investigates, a true-crime podcast that reopens the cold cases of some of the country’s most famous crimes. Hosted by veteran journalist Mary-Ann Harris, the podcast includes interviews with victims’ families, police and witnesses.

Paul Weaving, head of product development at Bauer Media, said: “True crime has become really popular in podcasts, but real life’s a natural extension of that.”

Seeing a gap in the real life podcasting market, earlier this year Bauer launched Ripper Real Life, a podcast featuring the wacky real-life stories that appear in Take 5 magazine. Ripper Real Life is hosted by the magazine’s editor, Paul Merrill, and narrated by deputy editor Kate Kirsten. Weaving says: “The team has great natural chemistry. They have worked together for a long time and it’s just really entertaining from the first listen.”

Ripper Real Life is the second new podcast from Bauer in recent months with the launch of Woman’s Day Uncensored, a topical look at celebrity entertainment news and gossip. Woman’s Day editor-in-chief Fiona Connolly leads a discussion that can span from Delta Goodrem to Elvis Presley and everything in between. “The idea of this is that these are real stories behind the big topics of the week, whatever’s going on the magazine. It could be what’s in the magazine, it could be what’s developed in the days since we went to print,” said Weaving.

Who magazine has also recently launched two podcasts – TV Binge List, previewing the best on TV, and Who Are You, which features celebrity interviews hosted by Pete Timbs. Another two are in the pipeline from the brand. Meanwhile That’s Life! has launched How I Survived, which details gripping true stories of women who have survived against the odds.

And that’s not all from Pacific. New Idea Royals launched in mid-April tapping into the frenzy following the birth of the royal baby and the wedding of Harry and Meghan. The podcast is hosted by the magazine’s editor, Frances Sheen, who is joined by longtime royal reporter Angela Mollard.

Another area ripe for podcast exploration is food. While Bauer’s Gourmet Traveller boasts the podcast Set Menu, News Corp’s Taste will soon be venturing into the space as well. The Eat Real podcast will focus on eating healthy as it looks to bust myths about what that really means.

Brodee Myers-Cooke, editor-in-chief of Taste, says: “People are getting excited about real food but there’s a belief that healthy food is expensive, that you have to go to the other side of town to buy it and that your family will hate it. Through Eat Real, we’re breaking down these myths to show people that there’s nothing standing between them and eating healthy.”

Eat Real, which is due to launch in the coming months, will feature experts from around the world as well as recipes listeners can create at home.

While the first order of business for publishers launching podcasts is growing an audience, there’s already plenty of advertiser interest.

According to figures from the IAB, almost half of Australia’s media agencies have used podcasting for clients with the number one objective to increase brand awareness followed by a desire to deliver an uptick in engagement. And the same number of agencies intend to use the medium in the coming 12 months with an interest in native live reads or bespoke branded podcasts in addition to pre- and post-roll brand mentions.

To create its podcast offerings, Bauer has partnered with podcasting platform Whooshka, which has a sales arm that helps connect brands with audiences. The relationship has already led to advertiser integration for the Set Menu podcast.

“In the first few months of the Gourmet Traveller Set Menu podcast launch, we collaborated with Sonos to develop integration within the podcast. It’s a perfect audience fit for Sonos in a contextually relevant environment. This was a great starting point,” said Weaving.

It’s early days as Australian publishers are only just getting started with the podcasting medium but they’re certainly not slowing down. In addition to News Corp’s Taste podcast, Pacific plans to launch an audio extension of Practical Parenting as well as a Girlfriend podcast that brings to life the infamous sealed section of the magazine.

These podcasts are also attracting new audiences to the magazine brands they have stemmed from. Earlier this year, Virgin Australia added the Set Menu podcast to its inflight entertainment.

Bauer’s Weaving said: “One of the biggest challenges for a lot of podcasts is discovery. There’s so much content out there, and it’s about getting fans. We have the luxury of having an amazing audience we can reach and that’s what we’ve got to do, wherever people are.”