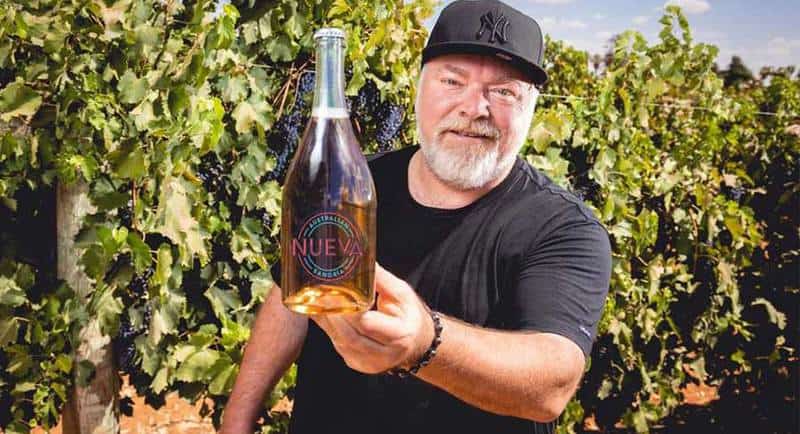 A new Mediaweek podcast published today celebrates one of the most successful partnerships in Australia radio – Kyle and Jackie O. After coming together on the Today Network in 2000 for The Hot 30, the duo were later moved to drive and then quickly into breakfast at 2Day FM. They jumped ship to ARN’s KIIS 106.5 (formerly Mix) where they have been a regular fixture as Sydney’s #1 FM breakfast show.

The third Mediaweek podcast with one half of the breakfast team, broadcaster Kyle Sandilands, was recorded in the Sydney offices of the King Kyle Group. It has been close to eight years since Sandilands was last on a Mediaweek podcast, way back when his book Scandalands was published. Back then Bruno Bouchet, who co-authored the book, was also a guest on the podcast.

These days Bouchet is managing director of the King Kyle group of companies and he again joins this podcast. We were keen to speak with Bouchet and Sandilands about the business empire they are building. As you will hear the conversation often wandered off-topic. The recording took place in the Sydney HQ of the King Kyle group. We also got to meet Coffee John (who Kyle talks about in one memorable segment) while we also met with the co-founder of the Nueva Drinks Co, Tegan Kynaston.

When you walk in the main entrance of King Kyle Group you enter a bar set up to promote the Nueva Sangria wine brand. Up a few more stairs and then there is an open plan workspace with an adjacent office and studio.

“We can do everything here,” said Sandilands showing us around. “Podcasting, live to air, TV production, film editing, recording studio. We are pumping out lots of content from here including on a real estate show we are working on for Amazon Prime.”

What follows are some of the highlights from the 90-minute interview. Unlike the podcast, these highlights have been edited and censored! 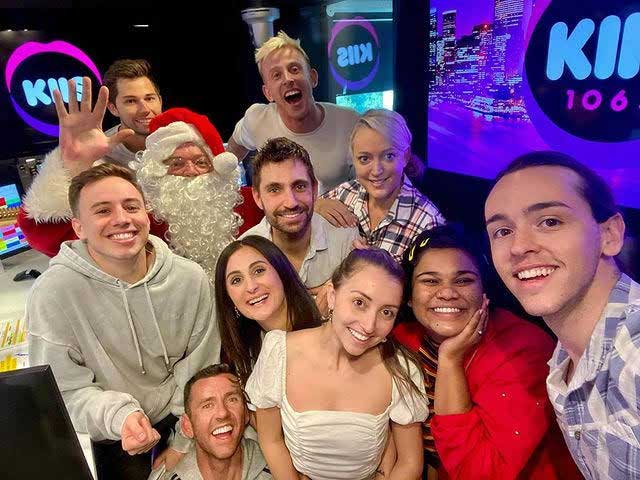 Jackie O with Santa and the KIIS 106.5 breakfast team on the penultimate show of 2020

Kyle and his managers

Bruno Bouchet is running the Sandilands business and managing the radio star. Sandilands explained: “Bruno had enough of radio and wanted to move onto something else. He now runs all my companies – King Kyle Group. He’s doing well here.”

BB: [On his transition from radio to corporate Australia working for Casio.] “One minute I was working in radio, making dick jokes and having a laugh, then a few weeks later I’m in a board room in Tokyo, negotiating the prices of wristwatches for the Australian market. Kyle has taught me to calm down a lot – I have taken a lot of hints from Kyle. He’s my guru.”

Is there a different dynamic between Sandilands and Bouchet who have gone from work colleagues to authors of Kyle’s autobiography to now business manager and talent?

KS: “I look at him as the same slave as I have always seen him. He gets paid more now though.”

BB: “When I was a kid listening to Kyle and The Hot 30. [KS interjects: ‘How dare you. There is hardly any age difference.’] I used to think that  Ugly Phil was great hosting that show. But when Kyle took over, all of a sudden I was thinking there was a mad man on the radio. I thought they had let a crazy person on air and he’s talking about things like how to get good blow jobs. It was outrageous.”

KS: “That’s how Bruno learnt to blow a bloke.”

BB: “I had decided I wanted to work in radio for either one of two people –Kyle or John Laws. I worked my ass off and the opportunity came up to work for Kyle and be the guest booker. I was probably trying too hard to be liked by Kyle and he despised me and I thought I would be gone after my second week.”

KS: “That’s right. Didn’t Jackie ban you from coming into the studio we broadcast from?”

BB: “Yes. For a guest booker it was very difficult that I couldn’t take the guest into the studio. I opened the door for them and just pushed them in.

“Over the 10 years I have known Kyle he has become not only a mentor but a close friend who I think knows more about me than my wife does.” KS: “We have the coconut water company H2coco and that’s going very well. Myself and three others have put together the Nueva Sangria business. Tegan Kynaston has worked with me for ages and we’ve been best friends for about 10 years. She and her family are in the alcohol industry and have been doing it for ages.

“Tegan, her brother David, and Sam, the other wine guy, got together and said they could do a high-end Sangria and it was a surprise hit. We were just selling it online at first and now it is in BWS, Dan Murphy, Liquorland…they are all jumping on board.

“It was a side gig for us that has taken on a whole life of its own. We have a Prosecco coming out this month and then a beer is being launched in January.”

A third launch is also pending after Kyle spotted a business opportunity early in 2020.

“All those grapes that got affected by the bushfires, I bought them all from the farmers instead of letting them be used as pig food. I asked the winemakers if they could do anything with a smoky grape. The only thing we could do was a smoky gin, so I said, ‘Fuck it, let’s do it’.”

Asked what he’d do if the gin takes off, Sandilands replied: “I’ll start another fire, I’ll burn the whole country to the ground.

“We have also gone into a business that does live pets for children and we are doing a cartoon based on that. Zac Efron is doing one of the voices and so will Dannii Minogue. I will also do a voice and I have music guys working on kids’ songs and we are also developing live shows, merchandise and toys.

“There is a lot going on. I am a bit annoyed it is coming into Christmas because I am just getting ramped up when everybody else wants to lay on the beach or visit their families.”

What Sandilands has built over the past couple of years is the biggest crack he’s had at a business group. “I have dipped my toe into a few things in the past. It’s mainly Tegan, Dave and Sam who have done all the hard work for the Nueva Sangria. I have pulled out of a lot of business ventures over the years – none of them failed, but I pulled out because it didn’t feel right. If something doesn’t feel right I will be a person who does a U-turn and waits for something else.”

KS: “I will roll the dice on something. I don’t know a lot outside of radio and TV. Anything outside of that I will have a look at, but I want to get experts in that industry around me. When they are nodding yes, yes, yes, I will bring them on board and give them some skin in the game. We will then slowly launch the boat out into the ocean, hoping it doesn’t sink.”

How hands on are you? Do you look at the bank accounts etc?

“Yes. I never used to. I would blindly trust everybody around me in the early years and a few people made some mistakes which led to huge losses. Those days are gone. I have great accountants, great lawyers, and managers of different departments. I look at the P&Ls every month and they have to come to me if there are any purchases that aren’t budgeted for.”

Listen to the unedited and uncensored Kyle and Bruno podcast

Top Photo: Kyle with a bottle of Neuva Sangria