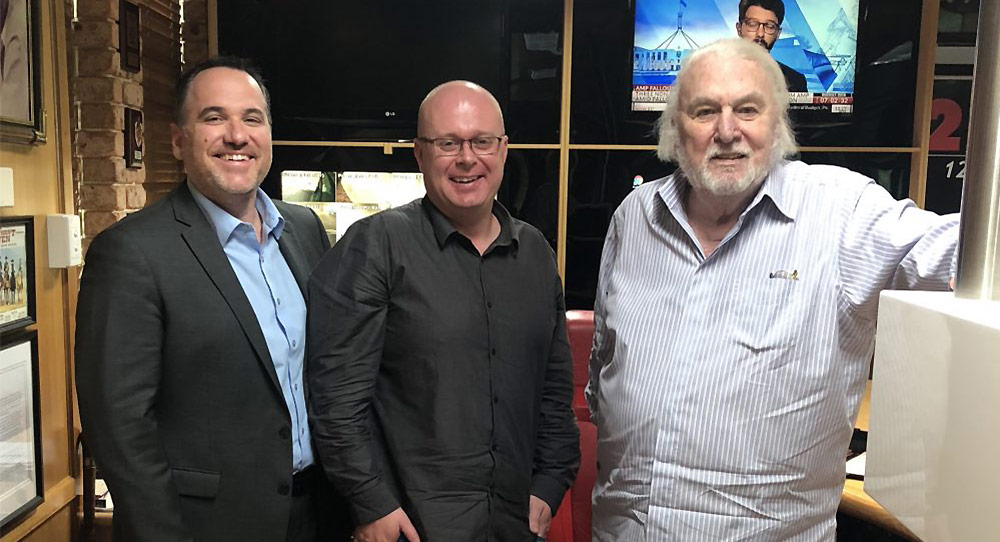 In a new series of podcasts from EFTM, Trevor Long and Chris Bowen this week visited John Laws at 2SM in Sydney where they saw the broadcaster in action and then spent time with him for an EFTM podcast.

The conversation started with The Bowen asking Laws what he was currently driving. “I don’t have much because I don’t have a lot of room,” he said. “I have a couple of Rolls Royces, a Bentley Continental, a Ferrari and a couple of other things.”

Laws told EFTM at one point in the past he had close to 40 cars in his collection.

When driving a car, Laws said he tunes into the ABC’s Classic FM. Laws said he never bothered about listening to commercial competition at any stage of his career. “I couldn’t give a flying… ”

“I love the audience and I love the microphone,” said Laws about his own broadcasting career. “I feel I am really only talking to one person, which suits me because the program is very personal.

“I was the first to do talk radio and back then Australians weren’t very articulate and weren’t good at having a chat. They would get tongue-tired and couldn’t put the words together as well as people like Americans. When I first started doing talk radio, Americans were so far ahead at conversing – they always had something to say. Australians weren’t like that, but they are now.”

When asked about the next generation of talk radio broadcasters, Laws told EFTM: “The interest in talk radio may well fade, but as long as you give people the opportunity to express their opinion they are going to take it.”

When asked about the different formats of 2UE and how he feels about his old station these days, Laws answered: “I think it is disgraceful.”

Laws paid tribute to 2GB’s Alan Jones, calling him a “very good broadcaster because he is a very good thinker. I think he is terrific and I like him very much. He and I get on very well.”

When asked about the other big name in broadcasting – and the hosts and Laws avoided mentioning Ray Hadley by name – Laws said: “In order to have an opinion on somebody you have to have respect for them. Consequently I can’t give an opinion on the other fella.”

EFTM raised the name of Bob Rogers and a supposed feud between the two. All Laws responded with was, “Does he still live in Balmoral? Great house.”

When asked about whether someone like Kyle Sandilands could make the move from an FM music station to AM talkback, Laws said: “Kyle has got a lot of talent, he is smart, and I guess he could.”